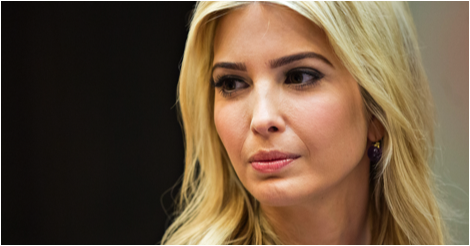 “This #NationalLibraryWeek, we honor our libraries and librarians for opening our eyes to the world of knowledge, learning and reading!”

Nice, right? Well, when the tweeter in question is Ivanka Trump, it’s less endearing and more….rage-inducing. Because the budget Ivanka’s father put together strikes a deadly blow to libraries: it eliminates funding for The Institute of Museum and Library Services. IMLS supports the U.S.’s 123,000 libraries and 35,000 museums through hundreds of millions of dollars in grants. Hundreds of millions of dollars. In an interview with The Hill, IMLS’s Director, Dr. Kathryn Matthew, specified that “$214 million of the $230 million budget goes directly to grants to state and local libraries, including $155 million distributed through a population-based formula grant.”

Ivanka’s tweet was (understandably) not exactly well-received by the librarians and other library supporters.

Miss_Librarian had this to say:

Your dad wants to cut all of our federal funding but thanks for the tweet. #SaveIMLS https://t.co/N6o9xIGuFg

And a chorus of others chimed in:

Your dad is trying to defund IMLS which provides essential funding and guidance to all public libraries. We don’t need your honor. #saveimls https://t.co/hD39NqX9Bt

Thanks but we’d prefer you let your dad know how sad you’d be if the IMLS budget was eliminated. #saveIMLS https://t.co/dFXxWWVjaT

“We agree – libraries do great work with federal funds for states @realdonaldtrump wants to wipe out.” -ALA President Julie Todaro #saveIMLS https://t.co/HZHbpYpsx8

How the hell is funding for libraries a partisan issue? Early literacy programs, access to information and technology, free classes on resume writing for job seekers, writing classes for teenagers…how is the value of any of this even up for debate? (Please don’t answer. I should know better than to ask these questions in this political climate but COME ON).

Libraries have always been chronically underfunded. But 45’s budget is a death sentence for some of the country’s most valuable institutions. So no one wants to see your #nationallibraryweek tweet, Ivanka. Sit down. Or better yet? Stand up, march over to your father’s office, and refuse to leave until he revises the budget to fully fund IMLS. Because Arabella, Theodore, and Jared Jr. aren’t the only kids who deserve a library.