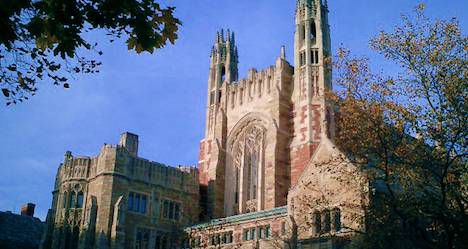 I sat down in a coffee shop, prepared to write an article about the recent petition from a group of Yale English majors that calls to “decolonize” their poetry course requirement. I had read news articles about it, but had never read the actual petition in question, and I needed to. To this end, I ordered a large coffee, cracked my knuckles, and got to Googling.

After pages of sifting through blog post after blog post of outrage and derision, I finally got to the petition itself. Unsurprisingly, it did not call for a mass firing of the Yale English department. It did not call for a riot during which the works of Shakespeare and Milton were to be ritualistically burned. Rather, these students said things like “we urge the faculty to reevaluate…” and “we ask the department to reconsider…” which are both very gentle phrases, petition-wise. My landlord would be thrilled if I wrote to her half as politely.

Of course, it’s not the tone of the petition that has upset the Facebook trigger-happy/opinion bloggers of America (notoriously literary groups, who no doubt reread “The Rime of the Ancient Mariner” every year for posterity). It is what they are urging their English department to reconsider: a major prerequisite titled “Major English Poets”, which is taken over two semesters and focuses on eight…well, Major English Poets, all white, all male. The petition asks that this course be abolished, “and the pre-1800/1900 requirements be refocused to deliberately include literatures related to gender, race, sexuality, ableism, and ethnicity.” Radical stuff. In the world of collegiate English departments, that’s practically a bomb threat.

You might, at this point, detect a note of flippancy. I have trouble accessing the same kind of panic that was triggered by this petition across the Internet, mostly because I agree with this gang of Yale upstarts. I, too, think that it’s unacceptable to graduate with a degree in English literature (which, by the way, refers to literature written in English, not Anglo-Saxon ancestry) having read only or mostly white male authors. I think that prerequisites and introductory courses that exclude people with myriad identities is not a good way to encourage people to study English, and I think people should study English. Most importantly, though, I truly believe that to include more choices in the topic and authors studied does not in any way threaten the status of William Shakespeare. I don’t think anything threatens the status of William Shakespeare. I am willing to bet the exorbitant cost of my Shakespeare textbook that he is here to stay.

The solution is more Keep Major English Poets, but add Major Women Poets, or Major Black Poets. Add, don’t replace. I am an English major at a major university, and I can say with confidence that there are always professors who are dying to teach authors that they haven’t been able to teach before. Or, for each Major English Poet, include an innovative work by a modern author whose work is comparable. Sure, on some level, it’s up to the English student to find the thing with which they identify on the syllabus. But relevance can’t be found where there isn’t any. There is so much more that is worth reading than what is deemed worth reading by the English Powers That Be.

But it isn’t the implementation of any of these changes that has rattled the cage of the comments-section beast. It’s the fact that these students dared to question The Canon, so-called “foundational” authors who have contributed so much to our literary culture. At no point, however, does anybody want to venture that this Canon became canonical because someone, somewhere decided it was worth teaching. Half the books we learn in school were once banned or excluded for some reason or another. For Slate writer and former Yale student Katy Waldman to declare “the canon is what it is, and anyone who wishes to understand how it continues to flow forward needs to learn to swim around in it,” is downright bananas. Yes, it is important to understand why these texts endure. But endurance for endurance’s sake is a cop-out (I mean, the Rocky Horror Picture Show endures. Should we be studying that? Note to self: contact Yale petitioners). The point is, the canon can change. Our way of looking at the canon can change. Telling me that Milton is canonical doesn’t make me want to study him any more. Telling me that Junot Diaz isn’t necessarily canonical doesn’t make me want to study him any less.

To suggest that these Yale students want their English professors to stop doing their jobs is ridiculous. They just want their study of English literature in 2016 to be different from the study of English in 1916. It isn’t dangerous, and it isn’t too much to ask.