I am not “too sensitive.” I’m quite dark hearted and I find dark humor to be something wildly enjoyable; dark horror and dark comedy really appeal to me. But there comes a point when “funny” becomes straight up hate and when that hate is straight-up racist.

Take for example a new book published by Abrams that, I fear, many readers are going to see as holiday gifts this year because it looks like one of those light-hearted humorous books about books and childhood but with a solid appeal to adult readers.

Bad Little Children’s Books, written by “Arthur C. Gackley” (pen name, complete with fictitious bio and author photo) looks like something many of us have seen before. It’s a collection of redesigned Golden Books, but with “humorous” “adult” takes. Here are some examples from the book: 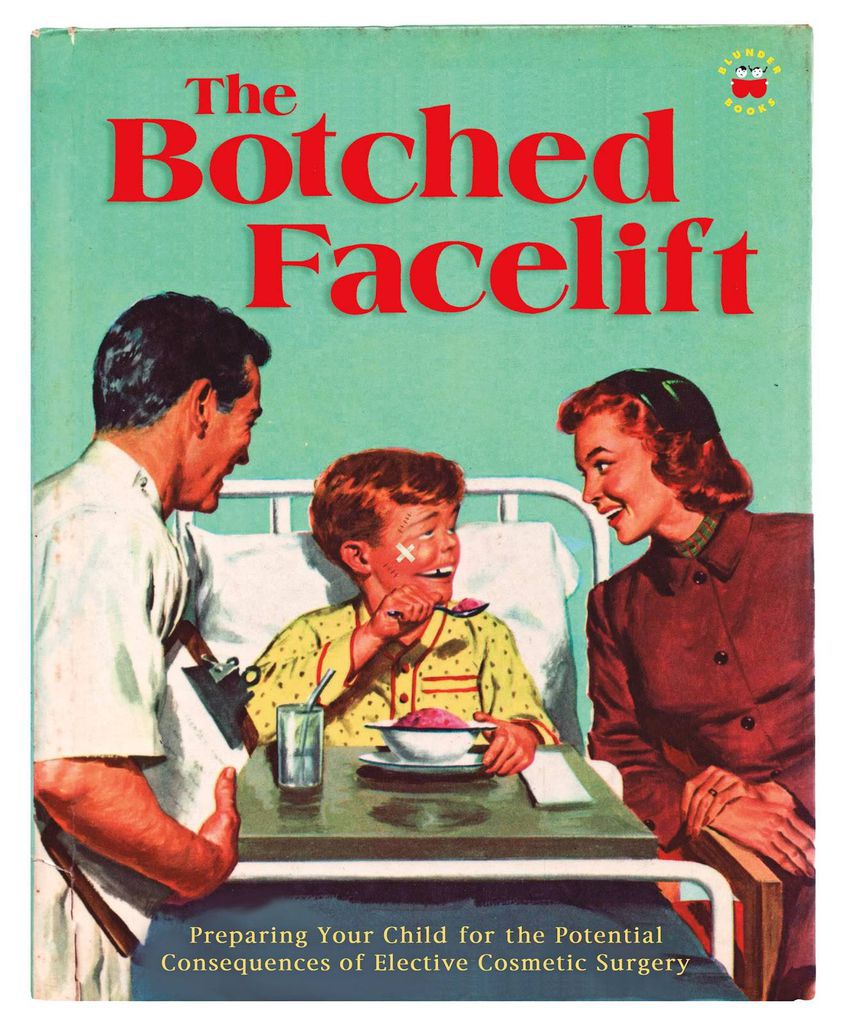 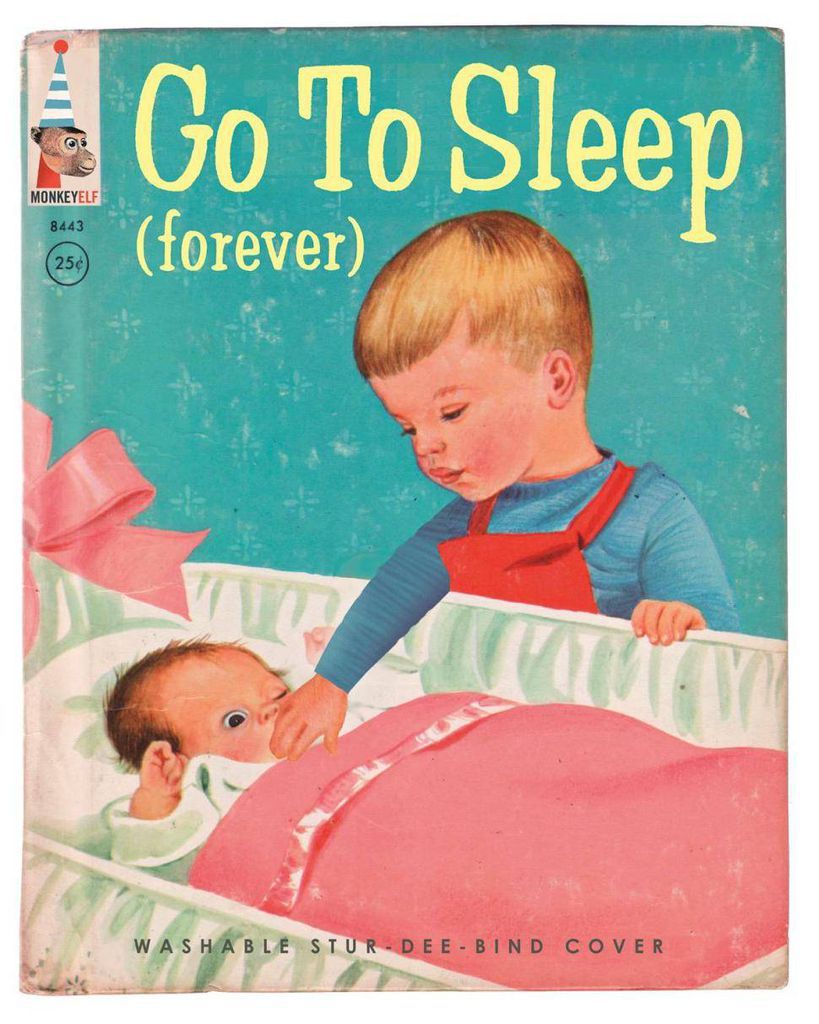 Look, it’s not murdering babies if it’s about sibling rivalry and the jealousy of an older brother, I guess. 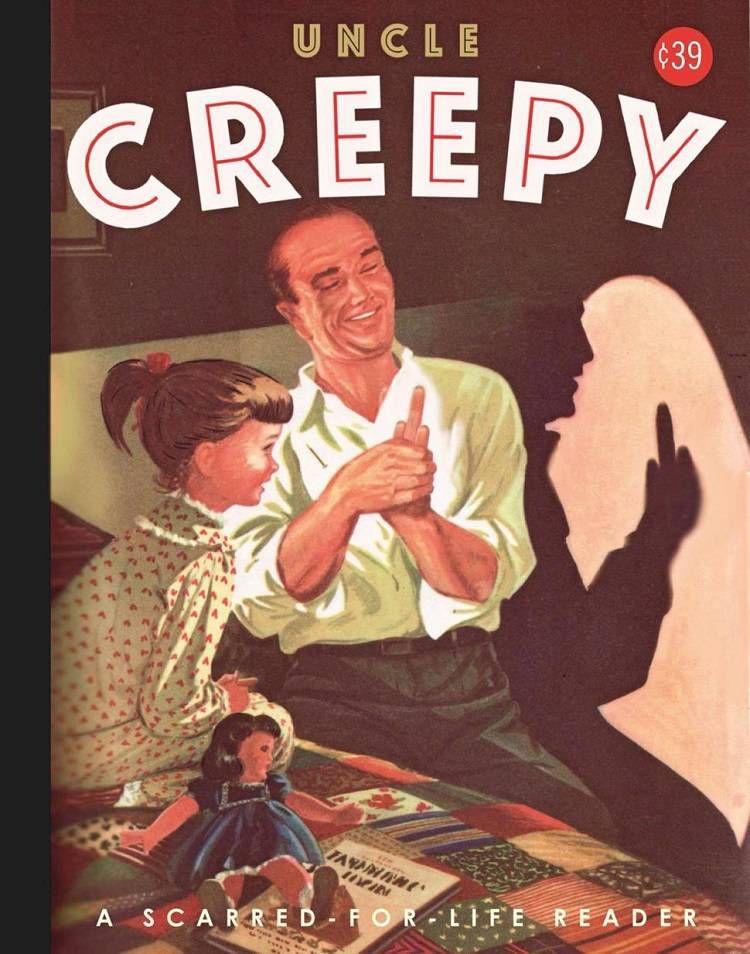 Oh neat, the trope of the creepy uncle, complete with a finger penis to amuse a young girl. This is new, fresh stuff. 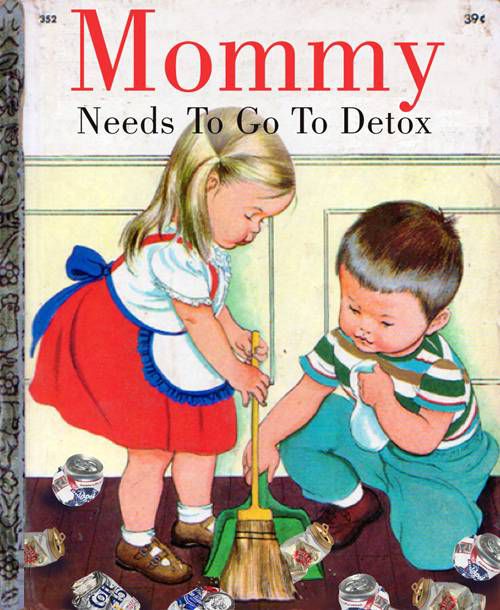 Parental alcohol abuse is, indeed, a barrel of laughs. Especially for children impacted by it.

So far, not terrible. They’re not especially funny or novel or creative, but they’re also not horrible offensive. It’s dumb humor and passable enough if you don’t think about the images or context too hard.

But then “Gackley” takes an unforgivable turn into straight up hate with this humorous little book. And it’s likely worth noting neither of these images show up on the book’s previews nor do they show up in solid searching (by a librarian, no less): 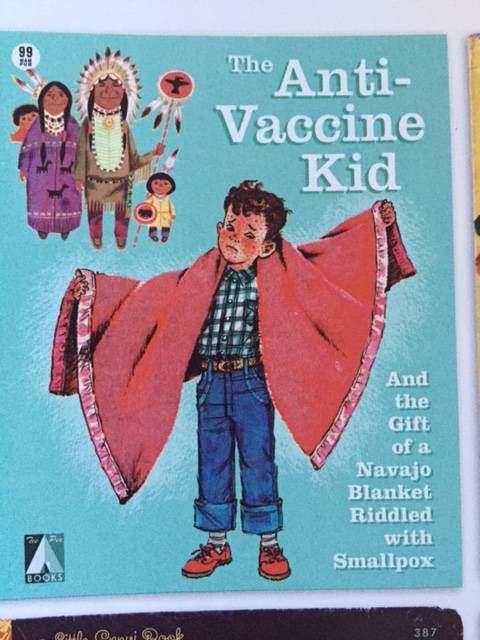 How funny, the anti-vaccine kid has small pox. Oh, and he caught it from a Navajo blanket! Behind the little boy on the cover is the Navajo family, really tying the look together.

Not only are we making fun a child who has no choice in the anti-vax matter (a small part of the problem) but the suggestion that small pox is a disease rampant in the Navajo community is disgusting and utterly racist.

If you’re not familiar with the history of smallpox and its relation to the Navajo people, then may I suggest a little reading?  The “joke” of this book cover isn’t just inaccurate, it’s a lie of white American history, further perpetuating stereotypes and harmful stories about Native People.

“Gackley” doesn’t stop there, though. After this little gem: 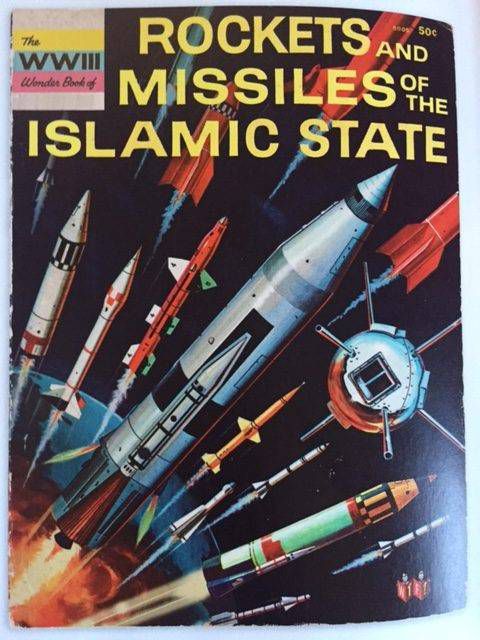 We immediately get to the most disgusting thing I’ve seen in a general “humor” book in a long time: 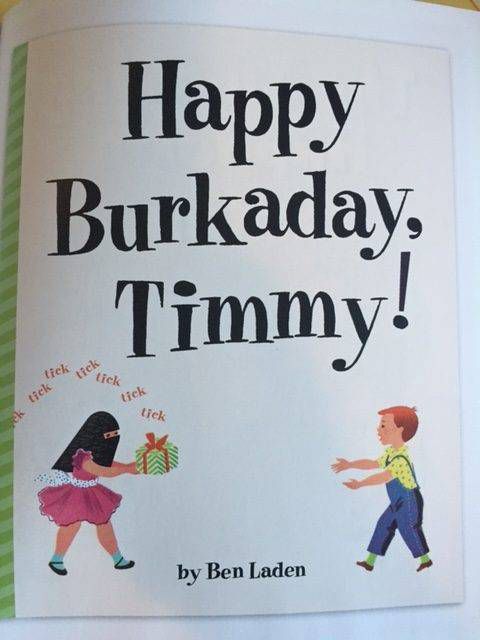 Stop a second and just look at the funny book cover here. Look at it and explain how this level of Islamophobia is at all funny. Is it the fact that there’s a birthday/burka joke? Is it the young girl in a burka delivering a “present?” Is it the ticking of a bomb inside that present?

Or is it the book being “written” by someone named Ben Laden?

In a culture which is hateful and violent against anyone outside of the Christian norm, particularly Muslims, who thought this was even an okay image to present in a book, humorous or not? This is the sort of harmful imagery and stereotyping that literally kills lives — and it’s not the lives of little white boys who are dying. It’s the lives of those, like the girl in the burka, who are impacted by disgusting “humor” like this.

Abrams, along with Gakley, and the editorial team behind this — who are all listed right in the copyright page of the book — should be ashamed to publish and promote this kind of racist dreck. We don’t live in a world where humor like this is acceptable.

This kind of “humor” is never acceptable. It’s deadly.

It’d be easy for certain sectors of our culture to say that we’re too concerned about being PC; that humor like this is meant to be a satire on how wound up we all are about being correct and kind toward people. The reality is we’ve never been that culture and we’ll never be that culture — certainly, we’ll never be that culture with a xenophobic, racist, misogynist talking Cheeto in the White House who wants to begin a Muslim registry and who has incited violence, hatred, and bigotry to spread unabashedly throughout the USA.

What looks like “humor” here is the reality of how a big swath of our society views humans who are not white and/or are Muslim and/or are in any other way “Other” from the white, privileged, cis-het, penis-bearing norm.

This “humor” adds to the misinformation, adds to the hatred, and ultimately, makes living in this society more frustrating, difficult, and dangerous for so many. And this “humor” is the kind of garbage that needs to be eliminated at all levels, particularly in publishing.

Particularly with how much work has been done to raise awareness of the diversity problem in publishing.

Shame on you Abrams, and shame on you, Gackley. Shame on everyone involved in this project who didn’t speak up and point out how utterly racist these “humorous” book covers are.

Whether or not I’m too sensitive and whether or not I’m too “PC” doesn’t matter. This book is the problem we’re having in America, and because it’s the kind of book that will be gifted and shared, particularly this holiday season, it’s a fucking travesty of “humor” that only serves to further disenfranchise and kill our fellow human kind.