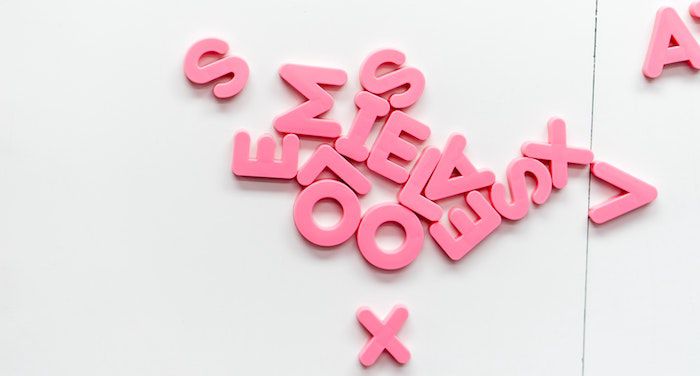 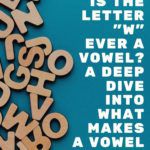 I remember virtually nothing from my 4th grade year. One thing I remember is how much I disliked listening to Hatchet during read aloud and would purposefully find ways to not need to sit on the floor and listen. The other thing was that my teacher claimed the letter “w” could be a vowel sometimes, though less frequently than “y” sometimes was.

This little nugget of information pops up in my mind from time to time. I’ve waited for the opportunity to pull it out during trivia nights or while watching Jeopardy.

Is it even a true fact? Or was my teacher being sarcastic and I held onto that decades later?

Turns out, a little bit of both might be true.

The simplest definition of what makes a letter a vowel is about the way the sound is produced in the mouth. Vowels are sounds made with the least amount of constriction in the throat and vocal cords. Originally vocalis in Latin (oh, hey, there’s the reason some of us love a dead language so much), it referred to the voice, but in English vowel is both the letter and the sound. This definition is considered the phonetic definition.

“Vowel” isn’t that simple though. It is about the constriction in sound, but it’s also about the syllabic sound; in other words, the peak sound in a syllable, particularly in oral languages, is what constitutes a vowel.

Now to get super nerdy with language.

Vowels can change sounds over the course of their pronunciation, just as they can also remain entirely the same. Vowels articulated the same way from beginning to end in a single syllable are called monophthongs. The “o” in hop is an example of this, as is the “i” in hit.

Then there are the diphthong, wherein a vowel sound glides from one to the next (they’re also referred to as gliding vowels) in a single syllable. The word “oil” showcases this well: the “o” changes sounds as it slides into the “i” beside it.

Triphthongs allow a vowel to travel through three sounds within a single syllable.  “Fire,” “dire,” and “Ireland” showcase the triphthong well, as the “ire” sound constitutes the triple vowel intonation.

There is an anatomical aspect to this, too, relating to where the tongue and throat move with the articulations. How someone articulates a word can also impact the quality of the vowel sound: those who may pronounce “fire” as two distinct syllables are no longer vocalizing the “ire” as a single vowel sound but rather as two distinct sounds “fi” and “er.”

Linguists make further distinctions among the -thongs as well, especially when differentiating between phonetic (i.e. the letter) and phonological (i.e. sound).

Not in the least.

In English, as shown above, it’s not just the letters that make up a vowel. It’s also the sounds those letters make which constitute a vowel. In words like “x-ray,” the x works as a vowel when vocalized, even if it doesn’t appear a vowel in writing. The same goes for the letter combination of “igh”—think “eight” or “thigh.” “Eight” and “thigh” make excellent examples of the above-defined -thongs.

There is not a simple and direct connection between vocalized vowels and their written counterparts. This goes for English, as well as for many other languages throughout the world. Many of those languages, of course, are part of English vocabulary, so it makes sense that it’s not as simple as the grammar school lessons taught.

Latin (hello again, pal!) doesn’t distinguish between a “v” and a “u.” This will make clear for those who never put it together why a “w” is called a double-u. The “v” sound in Latin is a u. It’s a written and spoken vowel.

But it’s not just in those borrowed words where “w” indeed takes the shape of a vowel. It’s in the way words are pronounced aloud—thanks again to those -thongs.

It’s a complicated question with a complicated answer that depends upon how you define vowel in the first place. If it’s a letter written down, then chances are no, “w” is not a vowel (even though its fellow “sometimes” vowel pal “y” definitely gets to be a vowel in written language in words like “gym” or “hymn”).

But when vowels are defined by their articulation and oral anatomy, then “w” is not an uncommon vowel at all—indeed, “w” is a vowel in the word vowel.

Those become vowels when the adjoining sound glides neatly with them, thong-style.

A letter is not a consonant simply because it’s not a vowel, in the same way a vowel is not a consonant simply because it’s a vowel. On paper, perhaps, we can make arguments that way, but as much as our language is visual, a significant component of what makes language so rich is its oral tradition. Just as English speakers have a variety of dialects, accents, and peculiarities (do you want to get “knocked up” at a hotel in London like you get a “wake up call” at a hotel in Chicago?), so do the components of sounds that comprise that language.

I’m not a linguist nor do I have a background in language theory. Rather, I’ve pulled together research, as well as my own understanding and background in writing, language, and speech to put together this piece for the average reader and speaker of English. It’d be possible to write a book-length thesis on this question alone, given how many theories and discussions exist about what even constitutes a vowel. There is so much more nerdery to be had when it comes to language, and often, it’s through studying another language where the depths of understanding and fascination can occur (see: why I still practice Latin—it’s the most useful dead thing I know).

If you are fascinated, there are so many excellent books about language (I especially loved the recent Because Internet on how our language has evolved with the evolution of the internet) as well as a number of excellent online columns that play into the particulars of our language.

Then, read yourself into those nerdy grammar tools the -nyms.