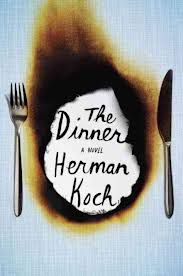 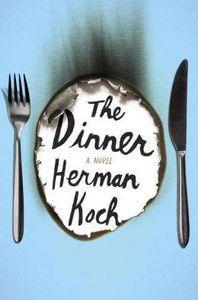 Well, if the blurbs are to be believed.

Salon writes, “The novel has been called ‘The Gone Girl of the Continent’ and not without cause: Like Gillian Flynn’s bestseller, it’s a tale told by an unreliable narrator, full of twists and skillfully executed revelations, ultimately registering as a black parable about the deceptively civilized surface of cosmopolitan, middle-class lives…” USA Today also compares it to last year’s runaway bestseller.

The book is even blurbed by The Great and Powerful Flynn herself: “The Dinner begins with drinks and dark satire, and goes stealthily and hauntingly from there. It’s chilling, nasty, smart, shocking and unputdownable. Read the novel in one big gulp, and then make plans with friends—you’ll be desperate to debate this book over cocktails, appetizers, entrees, dessert…and then you still won’t be done talking about it.”

So if you slurped Gone Girl up with a spoon, will you likewise eat up The Dinner until your plate is clean (pun absolutely intended, OF COURSE IT IS!)?

I loved Gone Girl. The first half maybe lagged at times, but how could it not feel a little slow, in comparison to the last half of the novel, which raced faster than a NASCAR driver?

I liked The Dinner. I thought it lagged at several points. Whereas Gone Girl gets GREAT halfway through, The Dinner doesn’t even really BEGIN until halfway through. I get that the twists need to be set up, but did there need to be QUITE so much set-up?

I loved how Gone Girl was both a page-turning thriller and a rip-your-heart-to-shreds examination of a marriage. Obviously, not all marriages are Gone Girl-complicated (or at least I hope they’re not, I’m getting married this summer and I don’t want to end up being a Nick OR an Amy… but especially not a Nick).

The Dinner got dark. It had twists. And yet, and YET, it didn’t force me to reexamine the institution of marriage, or grown sibling relationships, or the nuclear family unit (all subjects it deals with) the way Gone Girl forced me to reexamine its subject matter. I was entertained. I wasn’t provoked. And I certainly was not changed.

I’m actually surprised Ann Leary’s The Good House isn’t being given a fighting chance at being Gone Girl’s successor. They’re pretty different genres. Good House is mostly a dark domestic comedy that only gets a little thriller-ish towards the end. Still, the scalpel Good House took to its main character and her addictions/delusions and her close-knit community and its shortcomings/obsessions was the most Flynn-like scalpel I’ve seen used in a novel in some months.

So that’s my two cents on the Great Gone Girl Successor Debate (actually, I think I gave you guys more like five or six cents there). What do you think? Is The Dinner worthy of the throne? Anyone else want to join me over on Team The Good House? Or do you have another dark horse in your stable you want to let run this race?