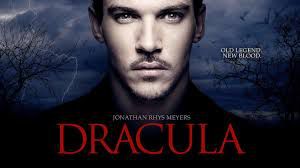 I’m not going to say I was excited to see NBC’s new Dracula series, which they’ve just picked up to series and are scheduling for Fridays this fall.

I like to save the word “excited” for sentences like “I hear ice cream truck music coming down my street and I’m excited because I have three dollars in my pocket.”

I wasn’t excited, but I was intrigued. I like Jonathan Rhys Meyers, who plays the title role, his face is very handsome to me. I think he’s also good at acting. I think. It’s hard to tell because I’m usually too focused on his face to be analytical about his scene work. You guys, I’m just not very good at multi-tasking!

I also like that the series is being helmed by the producers of Downton Abbey, that magical show that made old-fashioned servants sexy for the first time ever!

So I was intrigued by the series order.

Then I saw the trailer.

Just give me a second to remove my fingernails from my eyeballs.

At least they didn’t make the series a modern-day retelling set in New York City. That COULD have happened.

Right then, can I go nuclear now? Too late, I typed in the launch codes, it’s done.

WHAT THE WHAT? They’ve turned Dracula into this Monte Cristo figure out for revenge? Why? I get that his thirst for vengeance makes his character “complicated” and “dimensional” and gives him understandable reasons for slicing and dicing the good folks of London. The thing is, I don’t want complicated from Dracula! I want pure and unadulterated holy terror! Let Holden Caulfield hang out in Anti-Hero-land. Dracula belongs in Sleep-With-The-Lights-On-And-Your-Dresser-Pushed-Up-Against-Your-Bedroom-Doors-ville. THAT’S WHERE WE LIKE HIM.

Also they made Mina Murray a LOVE INTEREST instead of just one of a bajillion victims. That happened. Also, the new and improved (ha ha ha) Dracula doesn’t want to turn Mina into a vampire because, as he says, “To turn her into such as I am would be an abomination.” THAT happened.

Oh Dracula, you schmadorable creature of the night with your heart made of the goldest gold, why don’t you just step into the sun and show everyone your skin sparkles and call it a day?

I HATE this trailer. And if the trailer accurately depicts the pilot, I’m going to DOUBLE HATE this pilot.  What makes Dracula such a rad story is that Dracula is not relatable. BECAUSE ONE DOES NOT RELATE TO EVIL INCARNATE. Dracula doesn’t come to London to hang out with his bro-slice Renfield and have cartoon hearts pop out of his eyes every time he sees Mina Murray, no he most certainly does not! Also where’s Lucy Westenra aka “The Actually Interesting Female Character in Dracula?” Does she not deserve a sassed-up line and five seconds of trailer time? Also, what’s Renfield doing out of his mental asylum dungeon cell? Why is he riding around in carriages and speaking in complete sentences? I should also say right here I am a huge proponent of diversity casting, but they better give a very plausible and historically accurate reason regarding how a black male character (who I’m pretty positive is American based on the accent) can have that much status and power in turn of the century England. Don’t color-blind cast and then be lazy about it. That’s all I’m saying.

I’m derailing a little bit, let’s get back to how much I despise making Dracula an antihero. Dracula is a villain through and through. He’s Jaws from Jaws and It from It. There’s no identifying with him and no feeling empathy for him and there’s DEFINITELY NO SWEET CUDDLING AND MAKING OUT WITH HIM! Lord, you’d get your forehead bitten clean off! That’s no cuddle at all!

I get what’s happened. Twilight and Vampire Diaries and their hundred million rip-offs happened. Apparently in the 21st century it’s not a vampire story if it’s not a misunderstood hot monster who just wants a little love from the most boring human girl imaginable.

So now Dracula’s ripping off its rip-offs. No, really, there’s a whole “I’m a creature of darkness in love with the doppelganger of the girl I was in love with a couple hundred years ago” subplot that was completely cribbed from Vampire Diaries. DRACULA YOU GET AN F MINUS FOR CHEATING OFF ANOTHER VAMPIRE SHOW’S TEST!

NBC is playing it VERY safe this season. It’s ripping off Modern Family in the comedy department, there’s some procedurals, a pirate show (I’m actually a little psyched about that) and Dracula: Boring is the New Black.

This is what I hate about adaptations of classics. Nothing’s broken and still there’s all this fixing. Sometimes there’s a reason a classic is a classic. Let an old pro do what he does best.