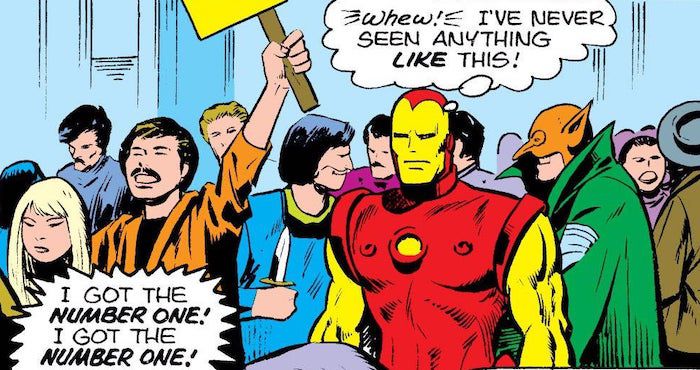 San Diego Comic-Con has been a little weird the past couple of years. In 2020 and 2021, they hosted a special event, Comic-Con@Home, consisting of prerecorded panels that anyone could watch online. Thanks to the pandemic, the usual, in-person conventions — large halls crammed with fans hoping to catch a trailer, meet a favorite creator, or buy exclusive merch — were just too dangerous.

If you ask Iron Man, however, he’d probably say that conventions were already plenty dangerous. Just look at what happened to him in Iron Man #72, published in 1974.

Our story begins with Tony Stark hustling out to California to deal with a supply chain issue at his company’s San Diego branch. By the time he gets there, the issue has been resolved, leaving him at loose ends. Tony decides to spend a little quality time with his underlings while he’s out there, only for two of them to take a swing at him.

Rattled by the incident, Tony decides he needs a break, but the usual clubs and tourist attractions are all old hat to him. He sees a newspaper article about San Diego Comic-Con and decides to check it out — in his Iron Man costume, of course, in case there is trouble.

The scenes at the con are interesting, from a historical point of view. In 1974, Comic-Con wasn’t the mainstream commercial event it is now. It had only been around for four years and was mostly the purview of super-nerds, so you don’t see any big Hollywood celebrities or movie previews as Iron Man walks the convention halls. Instead, he encounters cameos from comics creators (including Iron Man editor Roy Thomas), a bunch of fanboys petitioning to get Star Trek back on the air (hang in there a few more years, guys!), and some classic movie/TV showings (Gilligan’s Island, anyone?)

(I have no idea if anyone was actually showing Gilligan’s Island at cons in the ’70s or if this is a joke, but anyway, that’s what’s on the sign outside the screening room.)

Also, they mock the nose that Iron Man had on the armor’s faceplate at the time, which is always fun.

This being Comic-Con, Iron Man encounters a bunch of folks dressed as superheroes. But they’re not the only ones in costume: old foes/perennial losers the Melter, Whiplash, and Man-Bull are also milling about. They’re here to attract Iron Man’s attention by sticking up the con-goers.

Now this next part gets a little confusing, so try to follow along: another villain, the Black Lama, shows up in the middle of things. I’m not going to get into his whole deal right now, as he’s a bit Complicated. Just know that he has some sort of mind control powers, which is why those workers attacked Tony earlier. Now, he hypnotizes the con-goers, and when Iron Man quickly snaps them back to normal, he attacks our hero with a sword before disappearing.

I really don’t know why the writers felt the need to cram Black Lama into this story, as it was a perfectly fine concept on its own. The only interesting thing he contributes is his effect on the Melter, who is so incensed by the idea of anyone else killing Iron Man that he saves the hero from death by sword.

Anyway, the fight causes a fire, which threatens the comic book sellers’ tables.

In the end, Iron Man triumphs over his foes — with an assist from a fan dressed as him, sans nose — and is lauded by all the attendees. He is then unceremoniously thrown out by a security guard after he loses his ID badge in the fight. Such is the life of a Marvel hero.

The idea of a superhero duking it out at Comic-Con is hilarious, but this issue was a bit too complicated to pull it off well. Why would the villains decide to attack a con to get Iron Man’s attention rather than something more potentially lucrative, like a bank? What was Black Lama doing here? If they had just stuck with the basic premise, this would be a much stronger issue.

In any case, if you’re going to Comic-Con this year, maybe keep an eye on anyone whose costume seems a little too convincing. You never know who’s really in there!