Last Friday, astronaut Scott Kelly and cosmonaut Mikhail Kornienko blasted off from Kazakhstan in Russia’s Soyuz spacecraft to spend one year living on the International Space Station – the longest amount of time two people will have ever spent at ISS. The point of the mission is to start looking at the long-term effects that living in space could have on the human body… before we start planning a future manned mission to Mars. Going to Mars! 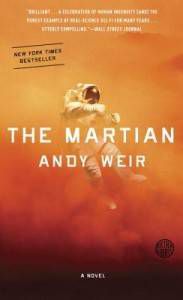 To celebrate the start of this major scientific study, I wanted to work on a book pairing for one of Book Riot’s favorite books of 2014, The Martian by Andy Weir. The Martian is the story of Mark Watney, an American astronaut who – six days after being one of the first people to walk on Mars – has been left for dead on the Red Planet.

He can’t contact his crewmates or NASA and doesn’t have enough supplies to make it until the next mission to Mars… it looks grim. But Watney is not one to just give up and, using his engineering skills, ingenuity, and sense of humor, is going to try and survive. It’s such a great read (or listen – the audio book is fantastic). 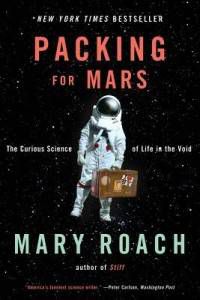 And happily, there are many great nonfiction books that will pair well with The Martian. One of my favorite books on space is Packing for Mars by Mary Roach. Roach is an incredibly funny science writer who has explored everything from ghosts to sex to what happens to dead bodies. In Packing for Mars, she looks at both what it means to explore space and how NASA tries to figure out the best ways make exploration feasible. There are lots of gross things – how to use space toilets or how astronauts deal with nausea – as well as tons of stuff I’d never even thought about. And Roach’s writing is so approachable. She’s one of the writers I consistently recommend for people trying to get into reading more nonfiction. 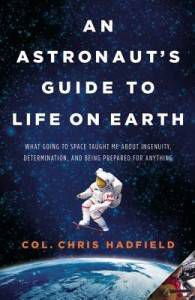 If you are curious what it is like to be an astronaut, a great book I just recently finished is An Astronaut’s Guide to Life on Earth by Col. Chris Hadfield. Hadfield is a Canadian astronaut who went on several space missions and even served as commander of the International Space Station. He became a bit famous on his ISS stint thanks to his use of social media and a video he made (with the help of his son) of David Bowie’s “Space Oddity” while there (it’s delightful).

In the memoir, Hadfield writes about what it took to become an astronaut, as well as the things being an astronaut has taught him about hard work and being part of a team. Hadfield has a charming and warm sense of humor – a lot like Mark Watney, actually – and manages to be honest about life as an astronaut without throwing anyone else under the bus. This one was full of weird facts about what happens to astronauts in space – all of the calluses on their feet fall off because they don’t walk anywhere! – that I know I’ll be thinking about as I follow Scott Kelly’s year in space.

There are tons of other books I could have recommended. When I mentioned on my blog that I was looking for more books on space, others recommended Out of Orbit by Chris Jones and Leaving Orbit: Notes from the Last Days of American Spaceflight by Margaret Lazarus Dean (May 19, Graywolf). And I know there are more. What are your favorite books about space travel?