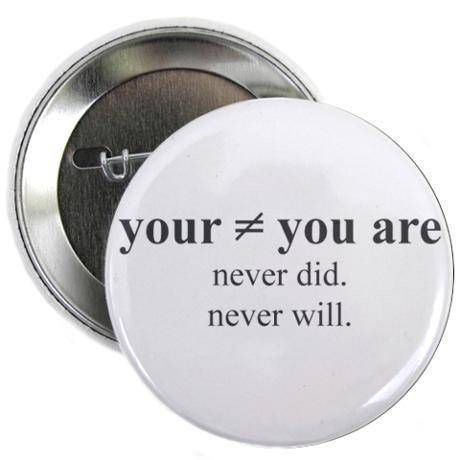 Like most teachers of writing, I’ve found myself making the same corrections and trying to fix the same bad habits over and over again. Its/it’s. Your/You’re. You know the drill. This isn’t even the fun part of teaching writing (yes, there are some). This is the cleaning the toilets part; take care of it now, but you know you are still going to have to do it later.

But, to make this part a little less painful, I got the idea (see #1 below) to give these everyday, crazy-making mistakes silly, memorable names, in the hopes that my students would pause over their “whos” and “theres” and “effects” long enough for their better grammatical angels to take over.

And it kinda works. Here they are (these are all nouns):

1. Itso: using It’s instead of its (or vice versa)

This one comes from John Gruber and was the inspiration for the rest of the list. The genius of this is that there are only two options, so telling someone they have an itso in the last sentence of the second paragraph both locates the error and its needed correction.

This mistake is generally just someone typing too fast, so even the slightest of pauses usually prevents it. With itsos, sometimes the writer genuinely isn’t sure which one to use.

While noting a “whorum” does show the reader where the mistake is and how to fix it, whorums usually indicate a fundamental misunderstanding, as most of us have to pause already to figure out if we need to use “whom.”

It’s shocking how many people don’t even know they are making this mistake, though nearly all of them get it once shown. This term has the highest “cure” rate on this list.

6. Plussesive: either using an apostrophe to indicate a plural or omitting a needed apostrophe on a possessive.

I can only read “Hamlets indecision about whether or not to kill Polonius dooms him” so many times before I myself want to drink poison and stab everyone in the room.

If I don’t pay attention, this is one I can still screw up. So I built the clue into the term a little. “Lay” is a transitive verb, so it needs an object, as in “chickens lay eggs.” By having something after the word “lay” in the term name (“var”), I am reminded that if “lay” is correct, something needs to come after it (the object of the verb).