With just a snap of his fingers, Thanos has established himself as one of the most power Marvel villains. What makes Thanos such an interesting villain is that his goal is not just overall power and obedience from others, though I’m sure they are on his list. He wants to kill off half of the universe (and succeeds) and calls it an act of mercy that will benefit the universe.

But before Thanos got his hands on the Infinity Stones (or Infinity Gems in the comics), before he wiped out off the universe, before becoming the “Mad Titan,” Thanos was born on the Saturn moon called Titan.

The Mad Titan himself was first introduced in The Invincible Iron Man 55, but readers got the full background of Thanos in Thanos Rising, a five-part comic by Jason Aaron with artwork by Simone Bianchi. The comic was released April 3, 2013 as a part of Marvel NOW! 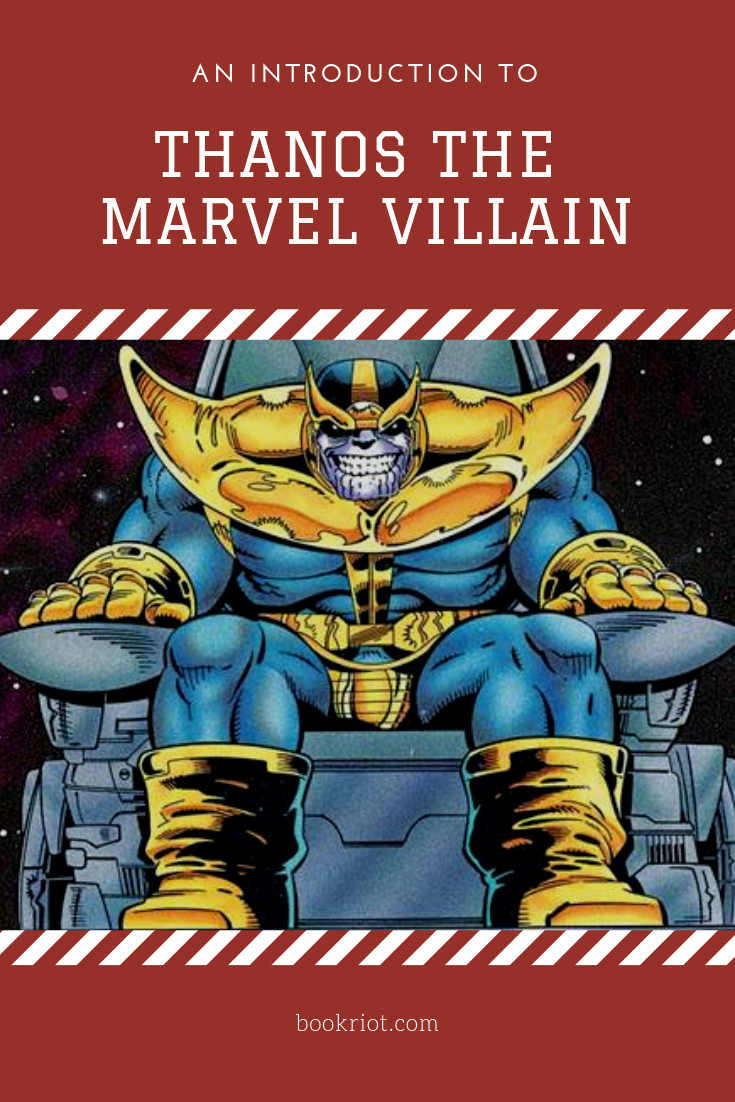 The comic begins with Thanos traveling back to Titan, visiting his mother’s grave. There, the comic travels back in time to where Thanos was first born.

The beings living on Titan were known as the Titanians, who all shared the same features and characteristics. Thanos was not among them. Thanos was born with purple, rock-like skin, and large blue eyes that looked like they held the universe within them.

Turns out, Thanos was born with a mutation called Deviant Syndrome, a mutation that is connected to Marvel’s Eternals.

One look at her bundle of joy and Thanos’s mother, Sui-San grabs a scalpel that is close to her and tries to kill her son. Due to his looks, Sui-San believes that her son is actually a demon she needed to kill before he wreaks havoc on the world. Thanos’s father, Mentor (A’Lars) sedates Sui-San and has her committed to a mental institution where her insanity increases.

As a child, Thanos was often mocked because of his looks, so he did not have many friends. Instead, he immersed himself in books about the universe, climbing the ladder and becoming one of the smartest kids in his class. During this time, young Thanos is having recurring dreams about someone trying to kill him. What he doesn’t know is that the dream is an actual memory of his mother, who is still in the mental institution, attempting to kill him.

Even though he is isolated, Thanos eventually gains a group of friends.

One day during class, his teacher announces that the students will be dissecting lizards. Thanos is so distraught by the images of cutting a lizard open that he runs out of the classroom and vomits. There, he meets a girl with raven black hair. Throughout the comic, this mysterious girls manipulates Thanos into embracing his destructive side. She is the one who convinces Thanos to visit a cave with his friends that eventually crumbles. As Thanos makes his way out of the destroyed cave, he finds lizards eating the remains of all of his friends. The girl convinces Thanos to seek revenge for the death of his friends and kill the lizards, which he does, making it his first kill.

He starts killing more and more animals, claiming it is for the good of science, but he feels his bloodlust rising. He pleads that the cause for his insanity is linked to genetics, so he visits his mother. By now, he has discovered that the recurring dream was in fact a memory of his mother trying to kill him.

As his mother sits across from him, he says that she is the reason he is a monster and the only way to recover his sanity is to cut the monstrousness out of her. He proceeds to cut open his mother, saying that she should have killed him when she had the chance.

After killing his mother, his bloodlust only grows and he continues to kill thousands throughout his life.

What makes makes Marvel’s most powerful villains so powerful? Thanos’s later absorption of cosmic rays mixed with his Eternals DNA gives him the power the superhuman strength. In some comics he even has mind control, telepathy, and teleportation abilities.

However, the Marvel universe is filled with heroes and villains with the same abilities. What makes Thanos stand out is his intelligence and extreme patience. Thanos carefully crafts his plans. At times, he is waiting decades to execute them, which aids his success.

The Balance of Life

After the fall of Titan, his home planet, due to overpopulation and finite resources, Thanos sets out to try to create a balance in the universe by killing off half the population on each planet. He believes the universe is at risk of collapsing because of the depleting resources, due to the growing population. He travels across the universe, killing half of the people on each planet, and adopting an orphan from each of the groups he killed.

Eventually, the process not going as quickly as he wants, he set out to collect all of the Infinity Stones, which have the ability to get rid of half the population in seconds.

Thanos’s endless killings and diabolical plans bring him head-to-head with various Marvel heroes such as the Fantastic Four, X-Men, and, of course, the Avengers. Even though Thanos is eventually defeated, he still goes down as one of the most powerful Marvel villains.