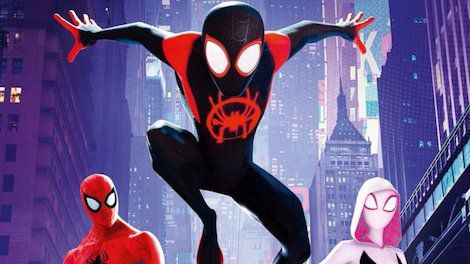 My brother took me to see Into the Spider-Verse the Sunday before Christmas in 2018. We had wanted to see it for a while, and I was excited. The animation looked beautiful.

Into the Spider-Verse is the first cinematic release with Miles Morales, a teenage Spider-Man who black and Hispanic. Miles tries his best to navigate a prep school in Brooklyn, while feeling out of place and wanting to go back to his old school and graffiti murals with his uncle. Life changes when a spider bites him one night, and Spider-Man dies saving him on the next night.

On the surface, the film appears to be a cartoon redemption movie for Sony, after they released the Emoji Movie. We also get the first Spider-Man film with a POC Spider-Man, after we have at least three iterations in the comics because it is about time! But this Spider-Man film also has two important themes: redemption, and a requiem for the dead. It’s a movie that allows us to grieve, and to hope.

We will discuss the movie plot in details. So, in case we need to post this:

Back in 2015, Sony was hacked, thanks to releasing their film The Interview which featured the North Korean dictator being brutally murdered in a comedic fashion. Among the less savory details that we learned was that Sony executives always wanted a white Spider-Man. Period. Donald Glover could win the crowd’s love and inspire Miles Morales, but the executives wouldn’t fly for it. At least, that was what the emails said.

This doesn’t invalidate Sony’s previous Peter Parkers, however; Toby Maguire, despite being a creep in real life and a manipulative poker player according to author and former poker game runner Molly Bloom, gave us a comforting Spider-Man in 2001. Andrew Garfield also gave us sincerity without the creepy poker background, and did his best considering the flawed script for the sequel. My dad died in 2001, and part of the way our family handled the grief was to go to movies that we normally wouldn’t see together. I was excited for Harry Potter, but we also saw Lord of the Rings and Spider-Man. My mom tried to cover my eyes for the kissing scenes, but that didn’t mar the moment when the citizens of New York pelted Green Goblin with garbage, or when they stood up to Doctor Octopus.

Andrew Garfield as Spider-Man did a decent job with the material he received. He had to play an edgier, more punk Spider-Man that showed less respect for the law but a higher sense of responsibility. His Gwen also tried to do more than fulfill her damsel status. Unfortunately, we got a rather lackluster sequel because the writers couldn’t figure out how to recreate the iconic William Dafoe Green Goblin.

Then we get Into the Spider-Verse. It technically fits the loophole by having a non-white Spiderman in an animated film, and more than one POC Spider-Man that have taken up the mantle. What’s more, Sony’s script acknowledges their writing fumbles over the years, and puts racial and societal issues at the forefront. While I don’t know if Sony’s executives are less racist, their screenwriting team nailed what they had to do to tell this story right.

In the Ultimate Marvel comics, Miles came into the light when Spider-Man died saving Captain America from a bullet. Miles blamed himself for wanting to resume his normal life after receiving his powers, and refusing to put on the mask. When he does, however, bystanders say they don’t want a new Spider-Man, and some of the heroes worry that he shouldn’t take up Peter’s mantle. It takes some time for Nick Fury to take Miles under his wing, give him a new costume and train him.

Both of these takes are idealistic in contrast to the movie. Miles establishes that Peter is a hero who died saving at least one important person, and his sacrifice wasn’t in vain. Thus, when we get to this film, it becomes a shock when Spider-Man dies saving someone, but we get the sense of failure just the same.

Let’s face it, our world has proven that justice is served incrementally. We see men and women get away with murder, rape, and exploitation using their money, privilege, and connections.

The movie reflects this bitter reality: Kingpin is a mob boss that ignored a chance for redemption when his wife and son saw him beating up Spider-Man. He instead attempts to summon an alternate universe version of his family, at the risk of wiping out all of Brooklyn. The machine, called the Super-Collider, causes much of the film’s collateral damage.

Despite his obvious crimes, Kingpin maintains his hold over the city until the end. He owns Alchemax, and by default the Dr. Octopus of this world as well as the Prowler. Mary Jane attends a fundraiser he holds in Spider-Man’s name near the climax; whether or not she knows Kingpin murdered her husband, her expression indicates that she knows he is no good but has to put up with him so that the fundraiser will go as planned.

Spider-Man in the film dies protecting Miles. Debris from his fight with the Green Goblin, who is a Kingpin lackey, pins him to the ground. He tells Miles to run for it with the USB that will destroy the Super-Collider, and dies when Kingpin breaks his ribs. Miles feels intense guilt that he couldn’t do more but run, especially when the entire city turns out for the funeral. He asks if he could have done more, especially when Peter B. Parker from another universe shows up and needs saving.

Due to the Dead

It’s a harsh coincidence that a movie that features mourning for Spider-Man also came out a month after Stan Lee, one of Spider-Man’s creators, died. The movie takes Spider-Man’s death seriously. It’s the first Sony film where the Daily Bugle and J. Jonah Jameson don’t trash Spider-Man in either cameos or out in the open; the newspapers only share positive news about the blond Peter Parker.

We mourn that today’s Spider-Man exists in a world shaped by cynicism and biases. In addition, we mourn that our past nostalgia can no longer exist; a 2001 Spider-Man may prove that New York has Spider-Man’s back in a 9/11 world, but mob bosses and politicians still want webbed heroes to stop reacting. We have a white supremacist working at Marvel, and a white comic book writer that pretended to be Asian for “reasons”.

Lee didn’t just create the early Marvel heroes, along with Steve Ditko, Joe Simon, and Jack Kirby. He created heroes that could exist in a post 1950s era. Lee fought in World War II, before becoming a technical writer for the army, and grew up in the Bronx. His heroes had bills to pay along with the lives to pay, and societal norms that allow evil to flourish. Spider-Man was someone who could work outside the law to deliver justice, when the law failed. Losing him and his anti-Nazi repertoire felt like losing in the battle of ideas currently going on, even if we are winning the war.

“I’m going to miss him,” Stan Lee says. It’s like he speaks from the grave, that he knows how we comic fans feel. We are going to miss you too, Stan. You and Marvel gave us heroes before Marvel thought hiring Nick Spencer was a good idea.

Four people in the movie have a chance for redemption: Miles, Peter B. Parker, Kingpin, and Uncle Aaron. Miles wants guidance to make him the hero that can avenge Peter’s death, but has a deer in the headlights attitude that makes him sabotage his school performance. He knows he’s just a kid and out of his league. Even so, no one else will take a stand and fight for the city. Also, he doesn’t want to lose another Spider-Man. A talk with his father gives Miles the confidence that he needs to spray-paint a costume and join the climactic fight. He trains to provide backup support and control his invisibility and shock venom powers. This allows him to stand up to Kingpin, and defeat him.

Peter B.’s main flaw lies in his inability to face his mistakes. He makes a bad investment, separates from his wife because he’s afraid of having kids, and wants to just run home initially after ending up in Miles’s universe, and spend the rest of his life eating pizza in a depressed funk. When the other Spider-Heroes volunteer to stay behind and destroy the Super-Collider, sacrificing their lives in the process, he insists on doing it because he wants to make it up to Mary-Jane but doesn’t have the courage to face the pain he caused her.

Miles calls him out for letting this Brooklyn get destroyed, and demands that Peter B. teach him the ropes, or the webs as it were. Peter B. despite himself comes to care for Miles, and realizes he needs the push forward; the only time he tells Miles not to come is for the climactic battle. He ties Miles to a chair and all but says he can’t bear to watch Miles die. Miles of course joins the fight and nearly dies, but he convinces Peter B. he can handle it and tosses Peter B. back to his original universe. This gives Peter B. the courage to face Mary Jane, apologize, and talk out their relationship.

Then we have Kingpin. Kingpin refuses to change into a better person. He would rather sacrifice his city, and hundreds of other alternate Brooklyns, to resurrect his wife and son. This shows denial over his complicity in their deaths. He would rather murder Spider-Man than hear that the other dimensional counterparts of his family aren’t his. Doc Ock bluntly tells him he’ll destroy the city, but he ignores the scientist.

He repeats his mistakes in the climax, where his beating up on Miles scares away the dimensional counterparts that the Super-Collider creates, and Miles gets the jump. Kingpin’s benevolent mask fades for the public when Miles leaves him for the authorities, destroying his power over the city once and for all. Miles has to lead the way to keep corrupt white men away from influence.

Uncle Aaron falls between Kingpin and Peter B., in that he learns from his mistakes and dies for them. He encourages Miles’s creativity and takes him to abandoned areas to spread his graffiti. Uncle Aaron accepts Miles for who he is but having different morals. He is no hero; we find out that he serves Kingpin as the Prowler, a hit-man with a purple outfit. Kingpin orders him to go after Miles and murder him after seeing the boy’s silhouette as Spider-Man dies. Uncle Aaron takes this task willingly, up until Miles unmasks himself. Despite his earlier callousness, Aaron cannot fire on his own nephew. Kingpin shoots him in the back in turn, and Aaron can only apologize to Miles for what he did. He redeems himself in death, and gives Miles the motivation to fight Kingpin and save Brooklyn.

A Leap of Faith

I think Sony, and its animation team for 2018, have shown in-universe and out-of-universe atonement. We get a period to mourn during the run-time, and a time to make something productive out of our grief.

For one, I can’t wait for the sequel. Miles has proven himself as Spider-Man, and as a Spider-Hero. He took the leap. Now it’s our turn.