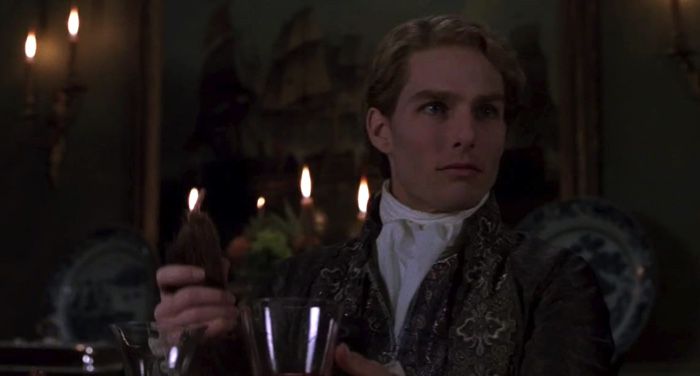 Tween me was obsessed with Interview With the Vampire.

I remember watching it over and over again on my tiny 13-inch TVCR; a VHS tape for which I didn’t have a real case, because I just…never returned it to my local rental place. (Sorry about that, Capitol Hill Video.)

With the announcement of the upcoming Vampire Chronicles series from AMC, there have been a lot of comments about the first filmed version of the story — that same Interview With The Vampire, starring Tom Cruise and Brad Pitt. Some people have reflected on the film with nostalgia, others with awe that anyone ever enjoyed it. Either way, seeing people talk about it has made me think of what my life became because of the movie. Not so much the movie itself, which definitely had an impact on me as a baby queer with a love for men with long hair and textured clothing (or maybe the movie inspired that, who knows); but for all the things that came after.

A few years into my obsession with Louis, Lestat, and Claudia, I introduced my newest high school BFF to the movie at a sleepover. It became a favorite, of course, and entered our sleepover rotation amongst Jane Austen adaptations and weird fantasy and sci-fi movies like The Princess Bride and Event Horizon. Eventually, we would start quoting it at each other — to this day, she can start the line “Life without me…” and I would finish about it being even more unbearable.

This was before the days of Google and Goodreads, so there were things you kind of knew and forgot — like the fact that Interview With the Vampire was adapted from a novel by Anne Rice.

“Have you read the book?” BFF asked one day, maybe after our third watch.

I hadn’t, and maybe now was the time to remedy that.

I would discover that there were actually several books in the Vampire Chronicles, and starting with the second, Louis’s forlorn voice wouldn’t be the one telling the story. Instead, it would be the history and further adventures of his maker, come to the new century.

And I was forever taken with Lestat de Fucking Lioncourt.

His sass, his history, and his complete inability to be less than an absolute mess. His outrage at his body running around the world without him. Even his weird dissolution as he learned of Heaven and Hell. He’s a character you hate to love and love to hate — but also who you absolutely love to love because he’s so terrible and flawed, yet lovely and weirdly good at the same time.

BFF and I devoured the books on our own that summer, and came back chatty and bereft of more vampires to read about. We’d continue to buddy-read any other Anne Rice novels to come out, and would swap hardcovers of the next and the next Lestat books. (We won’t talk about how she would mess with me if I wasn’t reading fast enough and make up completely ridiculous “spoilers,” asking me if I’d gotten to “that part” yet.)

But what would we read next? Oh, of course, there were always fantasy romances and Dune, but what else would give us that same feeling as Lestat getting into trouble and falling in love with way too many undesiring, undeserving people?

All the vampires we could find. Sad ones; broody ones; snarky ones; sexy ones.

For the next several years, we would trade off recommendations, from Amelia Atwater-Rhodes to Christine Feehan to Laurell K. Hamilton to Charlaine Harris and more. We’d email each other about the next Dark Hunter book and hand over novella collections on holiday breaks.

As the mainstream vampire love expanded with more big name books and adaptations of popular book series, I kept close watch. There was a thin line between the ongoing urban fantasy and one-couple-one-book paranormal romance, and I loved to toe it. With every new Anita Blake book, I also picked up a new Black Dagger Brotherhood book. (Yeah, BFF told me about both of those series.) As True Blood led the Sookie Stackhouse Mysteries down a path I hated to follow but couldn’t bear to leave, I found myself wandering through Twilight and the massive amounts of fan fiction it would produce.  Some series got less interesting as the authors created more and more discord for their main character, while other paranormal series became a little too much of the same. The lore of the vampire was important enough, but so, I came to realize, was the endgame love story for each one.

(How interesting, considering I found no relationship right for my buddy Lestat. Okay, not true. But he never ran off with David into the sunset. Hint hint, AMC.)

Eventually, I’d decide that the love story was the key (and had been for a long time). The vampires were great, but I would find myself first asking “does this have a happy romantic ending” before venturing into most stories, whether written for adults or teens, whether they were about vampires or sci-fi heists. That HEA was the key, and I have firmed up quite the reading habit when it comes to consuming them. I still love a good vampire story (especially if it’s a romance), and I’m always happy to explore a new or new-to-me author who creates them in an interesting way, with characters I can latch onto and love forever.

And while BFF and I have taken divergent routes through life, we still share an abounding love for dark, weird, sexy books — hopeful they’ll reach a happy ending.

No matter what, though, we’ll always come back to Lestat.

And we’re looking forward to seeing what they do with him this time around.

Looking for some vampire content to sin your teeth into? Try these vampire romance books, or muse on the future of vampire books.