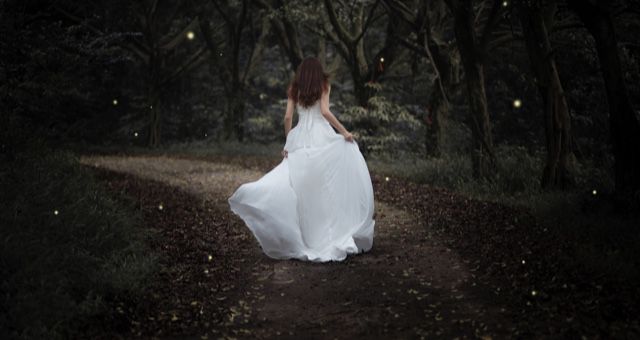 Some advice for readers: if strange beautiful humans offer you food and drink and want to dance in the woods, don’t. Most likely they are fairy folk waiting to make deadly bargains with you. They will always twist the deal because they can. 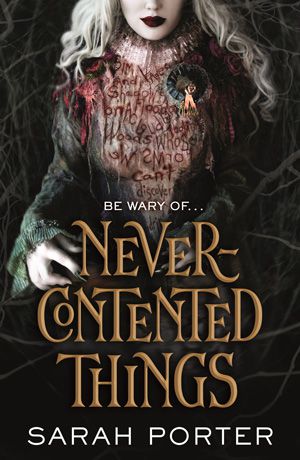 In Never-Contented Things, a reader may not know if the foster care system or the fairies are scarier. Fairies may not be real, but aloof red tape certainly is. Foster siblings Ksenia and Josh prepare for when Ksenia will age out of the system and have to leave their home, since their guardians see Ksenia as the bad influence and Josh as the golden child. Nothing can be further from the truth, but Ksenia’s low self-esteem and doubts allow her to believe that she is the bad influence and that leaving Josh would be for the best.

Josh refuses to accept that time and a broken system will separate him and Ksenia; when they explore the woods at night, mysterious handsome beings offer him a deal. As a result, Josh goes missing, Ksenia is trapped in a glamour imitation of their hometown, and their best friend has to navigate hell and back to save them both. Fairies are not nice, and their deals come with a high cost for most than those who make the bargain.

Sarah Porter’s other works include the Lost Voices trilogy, about a teenager who gets entangled in mermaid politics, When I Cast Your Shadow, and Ratspeak. She also leads creative writing workshops in NYC.

Priya Sridhar: Never-Contented Things is a devil’s bargain that one foster sibling makes to keep his sister in his life. What was your inspiration?

Sarah Porter: I decided to write a book about humans lured into Faerie after a night hanging out with my husband Todd and a few of our close friends while we were on vacation in Maine. We were talking whimsically, and Todd said he’d take a cocktail from a bartender with snake heads for hands. I got upset and told him he would do no such thing; under no circumstances do you accept food or drink from non-human visitants! He kept teasing me about it, until I was like, dude, you lack basic faerie literacy, and that leaves you vulnerable. The first glimpses of the story came that night. At first I thought it would be two twentysomething kids who stray into an enchanted bar, but then it became two teenagers who stumble across a faerie party in the woods.

As for Josh and Ksenia and Lexi, and the specifics of their dynamic? I don’t know where characters come from, mine or anyone else’s, and I wish I knew. Why do these voices appear and speak to us? Are our minds really so manifold and full of suppressed murmurings that are just dying to incarnate in ink, and emerge as distinct individuals?

PS: The fairies in this realm enjoy humans, and using their desires against them. What was your favorite part in writing about Prince and which mythologies were your source of reference?

SP: The epigraphs that open each section of the book trace its influences: Goblin Market and Sir Orfeo and some of the terrifying anecdotes in Yeats’s Mythologies were all important sources for me, along with Robert Kirk’s The Secret Commonwealth of Elves, Fauns, and Faeries. Brian Froud’s Faeries made a deep impression on me as a child, and I think Froud’s influence is all over YA fantasy. So it’s drawing on assorted faerie lore of Britain and Ireland, mostly.

In this book (and in Vassa in the Night, too) I particularly loved playing with the perversity of faerie logic. It’s a kind of magic that functions like metaphor, lawless and full of sly indirections and misdirections, and it’s a delightful challenge to capture those subtleties.

I have an especial love for the scene where Prince confronts Ksenia outside the liquor store, too.

PS: The story talks about the dangers of the foster care system, including how even the most well-meaning foster parents can be destructive. They certainly misjudge Ksenia because she is the reasonable sibling compared to Josh. How much research did this part involve?

SP: Most of the research I’ve done is focused on larger issues of psychological trauma rather than on the intricacies of the foster care system specifically; trauma is an area I’ve studied a fair amount.

The more I looked into foster care, the more I found that the laws are so labyrinthine and so varied from state to state that I kept the location of their town deliberately vague rather than try to sort it all out. I definitely did enough research to learn just how terrible the odds are for a kid like Ksenia, who reaches 18 without being either adopted or reclaimed by her family of origin. I’ve been close to people who’ve been in the system, and heard a lot of stories that don’t conform to the stereotypes. Someone I know was devastated when his parents came to take him out of foster care, because he adored his foster mother and wanted to stay with her. But since he was a child, the adults were free to make all the decisions without any regard for his feelings.

The Delbos do cruelly misjudge Ksenia, but so does almost everyone else, including her birth mother. And Ksenia is so locked down emotionally that I think it’s easy to see how her worth wouldn’t be readily apparent. There’s a gulf between her inner self and what she knows how to present to the world, and that isolates her and makes her even more dependent on Josh.

PS: Spoiler-free question; do you think without the magic, Josh and Ksenia would have found a way to stay together despite the red tape and disapproving parental figures?

SP: Without the magical intervention, I think Ksenia would have been obliged to leave town and make a new life elsewhere. I think she would keep visiting Josh whenever she could, but inevitably they would develop interests and attractions that would pull them apart. I’d imagine an eventual rupture, then ultimately a reconciliation that would let them stay friends, but their intense intimacy and entanglement almost certainly wouldn’t survive. My personal experience has been that relationships or friendships that rely on a confusion of psychological boundaries tend to blow up after a while, and sadly I think they wouldn’t be immune to that.

On some level Josh intuits all of this, which is why he’ll go to any extreme to hold onto her. One of the hardest parts of growing up is accepting that love isn’t always enough.

PS: Lexi, Ksenia and Josh’s friend, ends up being instrumental in saving them and their town, and her relationship with Ksenia is much healthier. Was it more than love that gave Lexi her strength to find the truth?

SP: It’s much more than love! Lexi’s family is a huge source of the strength and insight that makes her a terrible target for Prince and his cohort. She’s consistently very quick to see through manipulations and set boundaries, and those are skills that kids from nurturing, supportive, highly conscious families have a much better chance of developing. She doesn’t discount her own feelings and perceptions the way Ksenia does, because she’s been taught to trust herself.

So in an indirect way, I suppose you could say it’s love that lets Lexi find the truth. But it’s her family’s love and her love for herself that helps her apply her intelligence to cut through the fog. Ksenia is smart too, but she tends to use her intelligence as a way to confound and doubt herself; it’s a weapon pointed inward. Just being around Lexi is a huge education for her!

PS: There is always hope, the book promises, in the darkest of times. What other messages do you hope the book conveys to readers?

SP: I hope readers come away from it with more compassion for themselves and others. More understanding of how deeply vulnerable many of us are, and how much heroism there is in just fighting to know your own truth and speak it.

PS: Faeries aren’t real, but if they were, what advice would you have for teens and adults to avoid getting trapped or entangled?

SP: As a general rule around both faeries and humans, be on your guard against glamours. Charisma is a tool, not a trinket; when you see it, question how and why it’s being used. Ordinary turns of phrase can be made into magic spells to make you forget what you feel, what you know, what you value. Not all never-contented things are faeries, but all of them are looking for people they can feed on, and many of them know how to use enchantment to screen their true intentions. Be wary.

PS: What upcoming works do you have planned?

SP: I have another book coming out with Tor Teen next year. We haven’t settled on a title yet but it’s about Angus Farrow, who thinks of himself as an innocent, romantic boy on a quest to find his true love. In reality, he’s an embodied curse cast by an evil old sorcerer, and he’s meant to murder the girl he loves.

And I’m just starting a wild pseudo-science historical fantasy trilogy set during the Napoleonic wars. We’ll see where it goes!