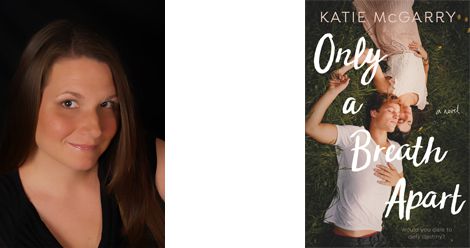 Scarlett wants to go to college out of town, and become a speech therapist. Her former best friend Jesse wants to manage the farm land he’s inherited from his grandmother and turn a profit. To prove he can handle the responsibility, however, he has to prove himself to three people; the local psychic who lives on his land tells him he has to reconcile with Scarlett, after the terrible way he hurt her. Jesse doesn’t know if he can do that sincerely, without cursing Scarlett in turn. But he’s willing to try, especially when Scarlett opens up about her problems.

Katie McGarry is a prolific YA author. Her series include Pushing the Limits and the Thunder Road series. Only A Breath Apart is her latest YA novel.

You have a marvelous and extensive writing career, spanning twenty works. How was writing Only A Breath Apart different from penning other books such as the Pushing the Limits Series? 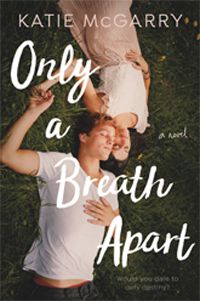 Only a Breath Apart is a bit different in that it’s the first book where I play with the realm of the mystical. It is still a contemporary novel, but Jesse has to deal with the fact that he’s been told his entire life that he’s cursed because of his bloodline. Scarlett becomes a psychic’s apprentice in order to make enough money to reach her goals. There she learns how to read palms and is told by the local psychic that Scarlett herself has psychic abilities. Writing this mysticism was a first for me and I loved it!

A sense of magical realism and fantastique runs through the story that the curse may exist and that Glory may be real. Do you believe in the curse?

I love this question. I’m hesitant to answer because I want readers to decide whether or not the Lachlin curse and/or Glory’s abilities are real. I’m afraid if I answer, it will sway people one way or another. I think that’s part of the fun of this book—what do you believe is real and what isn’t?

Glory is possibly one of my favorite secondary characters I have ever written. Is she a con? Is she really psychic? Is she both? She left me smiling nearly every time I wrote her onto the page. It’s up to the readers to decide Glory’s motives. Does she say what she does because she’s conning Jesse and Scarlett or because the universe has truly led her to help them?

Marshall is my favorite character and an example of an antagonist who isn’t outright evil. What was the process for depicting him?

I actually did a few rounds of edits on my own for Marshall. He was a bit of a tricky character to write because I needed him to be an antagonist to Jesse, but at the same time, I didn’t want him to be the overbearing/awful adult. I ended up writing Marshall based upon my experiences of being a parent to teens.  I love my teens, I’d die for them, but I also understand that they are on the verge of becoming adults. That means I need to give them space to make their own mistakes while still being close and involved.

Marshall understood that Jesse had been pushed into being an adult at a young age and was doing his best to respect that while still trying to give a guiding hand to someone who was still a teenager.

It’s a fine line, a tough tight-rope to walk and I tried to write Marshall as authentically as I could.

The story features instances of severe domestic abuse, and with the characters having to find solid strategies for navigating it. How much research did you have to do, and how did you deal with the upsetting parts?

I did quite a bit of research on domestic abuse and on what happens once someone does try to escape an abusive relationship. I talked to people who were involved in abusive relationships and discussed with them how they broke free. I also talked to therapists and people who are involved with the system. They gave me an understanding of how they would handle someone coming to them for help and legally what they were allowed and weren’t allowed to do.

The upsetting part of the story is that I know that domestic violence is real and there are people who are stuck in the terrible cycle. Leaving isn’t always easy. Abusers can be manipulative. Victims sometimes don’t see a way out. The question asked was how I dealt with the upsetting parts of this story—I’m dealing with the reality of domestic abuse by writing this story.  I have known people who have been in this awful circumstance and they felt as if there was no way to leave. I wrote this book to prove to them there is a way out and there are people who will help.

Do you think the abusive person in question will break the cycle, or at least have to face more consequences of his actions? (Mind that I think that their conclusion is quite satisfactory, so this is curiosity.)

I hope the abusive person does change. He was given tools to help change his behaviors, but that’s up to him. Change is possible, but a person has to want to change plus take the time needed to change. He also needed to let his family move on and get the help they needed while he dealt with himself.

Can our palm lines change with time? And how can readers learn more about palmistry?

According to the research I did, yes palm lines can change. I went to metaphysical bookstores, read books, researched online and talked to people who understood palmistry. I won’t claim that I have it all right as I did find that there are different theories about palm reading. I chose the theories that were best for the book.

I have a second book coming out with Tor Teen next year. This book features Jesse’s best friend, Veronica (or V for short). I’m not ready to talk much about the book yet, but people in house think it’s my best book yet. And I’ll be honest—Sawyer and Veronica are in the running for best book couple I’ve written!