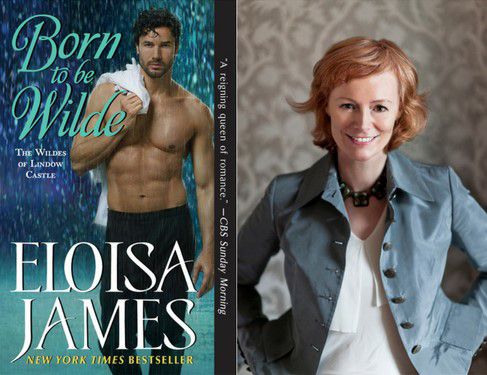 It was serendipitous that in college I, an avid romance reader, was in Professor Mary Bly, aka bestselling author Eloisa James’s class and she subsequently became my advisor. In between teaching Shakespeare classes, James weaves regency love stories between dukes and duchesses, princes and princesses, and everything in between. Today, she joins Book Riot to discuss the latest New York Times bestselling novel in her Wildes of Lindlow series, Born To Be Wilde, a battle of wills between Lady Lavinia Gray and Parth Sterling, the handsome bachelor who rejected her marriage proposal.

What can you tell new readers about The Wildes of Lindlow Castle series and the third novel, BORN TO BE WILDE?

Born To Be Wilde opens with my heroine, Lavinia, proposing marriage to one of the richest men in England—and being flatly rejected! Parth dislikes her, but he does politely offer to try to find her a husband. In short: this is a funny, emotional version of enemies to lovers.

The title of the third novel is quite interesting because Lavinia Gray and Parth Sterling—our main couple—aren’t actually Wildes by blood, even though they’re welcomed with open arms. What inspired you to tell this couple’s story and why did you feel it was important to negotiate their independent spirits with societal emphases on wealth, ranks, and titles in that time period?

Both of them appeared in Wilde In Love as secondary characters, but as soon as their first snappy, sassy conversation appeared on the page, I knew that I had to write their story. As you point out, neither of them are Wildes by birth. It was very interesting to write about people who are not solidly part of the establishment.

To switch gears a little bit, in an interview with Entertainment Weekly, you mentioned that this novel is the first time you’ve written a non-white hero. Parth is an Anglo-Indian businessman who grew up in England. When a non-white character is involved in that time period, there are always challenges to be mindful of, such as colonialism and orientalism. Can you speak to the kinds of research that went into crafting him and giving him an accurate portrayal?

Parth’s mother was from India. Writing a biracial hero was an enormous challenge and I leaned heavily on people’s help. Over the years, my brother-in-law Sunil had told me stories from Indian history and mythology (“Parth” was a famous warrior and Krishna, also known as Sunil, once served as his charioteer). I also hired two experts. One was a professor, who checked the novel for authenticity and accuracy in terms of history and detail—the correct adornment of Parth’s mother’s sari, for example. The second was a sensitivity reader, who read the book multiple times correcting language that might feel disparaging. Finally, my dear friend and marvelous author Sonali Dev read the final version out of the goodness of her heart—and even after all those versions, she found some errors that were corrected in the proofs. The novel was labor-intensive, and I’m so grateful to everyone who helped me.

There are preconceived notions about the roles people of color have in historical romances and what counts as “historically accurate.” In your note to readers at the end, you attempt to disabuse them of the notion that Anglo-Indian marriages were taboo in the 18th century. What are your thoughts on diversity in the context of historical romances, and as a longtime HR (historical romance) author, have you come across any other stereotypes that you think are inaccurate to a certain extent?

Putting on my literary professor hat, I would argue that no historical romance is strictly accurate. Young ladies certainly weren’t bathing daily, given that a footman had to boil water, drag it upstairs, and fill a movable tub—but my heroines do! At the base, romance writers create escapist fiction, and we are not scholars, although we do go to great pains to be as accurate as possible.  It’s marvelous, for example, to see our novels finally showing that there were people of color in all echelons.

In Born To Be Wilde, I thought it was essential to let readers know that Anglo-Indian marriages were proudly celebrated at the time; it was the Victorians who brought a sense of shame to the table. Parth, therefore, would not be as affected by prejudice stemming from the color of his skin as we might assume. Crucially, whether or accurate or not, the basic mores that structure our books must be congruent with contemporary mores or our readers will be disturbed rather than entertained. An alpha hero, for example, needs to be carefully constructed to reflect contemporary ideas about consent.

Diversity in romance novels has become more and more imperative for readers and novelists. With the introduction of Parth, is this something you think you’ll be addressing more in your writing?

I wanted to write Parth in answer to the many readers who’ve written over my twenty-year career and asked me for characters of color, and I’m very glad I created him. That said, I think the most valuable way to support diversity in romance is to support authors of color. I am making a concerted effort to read more “own voices.” I support the Women of Color in Romance on Patreon, and their newsletter has led me to some marvelous new-to-me authors. If you enjoy scandalous dukes, may I suggest you try the marvelous novels written by Erica Ridley and Liana de la Rosa? Or if you’re in the mood for a sexy, ferocious bikers, try Kathryn C. Kelly’s Death Dwellers MC series.

Speaking of stereotypes, the book opens with Lavinia proposing marriage to Parth, which establishes the fortitude of her character very nicely (and is very admirable!). What made you decide to go with that scene?

I didn’t want to start the book there!  My wonderful friend and author, Linda Francis Lee, read the first few chapters and pushed at me to begin the book with the proposal scene. She was right! As you can see, my books really are written by a village.

What’s in store for the Wildes?

Next up are three novels focusing on the three eldest Wilde daughters. Their mother ran away with a Prussian count, which cast their parentage in doubt. They went to an elite seminary school for girls but faced some ruthless bullying about being illegitimate. That trial by fire means that no duke would ever intimidate them!