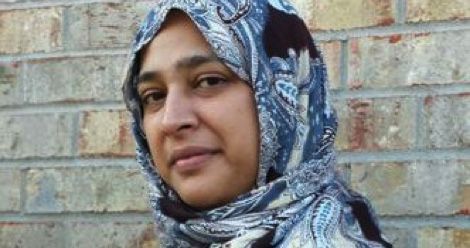 Meet Yasmin’s author, Saadia Faruqi, is a Pakistani American writer, essayist, and interfaith activist. Her adult debut book was named Brick Walls: Tales of Hope and Courage From Pakistan. She’s also the editor-in-chief of Blue Minaret, a magazine for Muslim art, poetry, and prose. I had the opportunity to ask her a few questions about her upcoming children’s book! 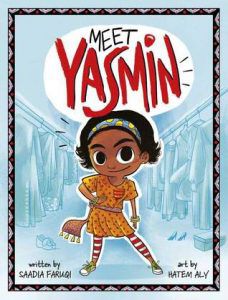 Yasmin is a Pakistani American second-grader ready to take on the world. She is creative and curious, and with the help of her family, there is little that this spirited young girl can’t achieve! You can Meet Yasmin! on August 1st, the book’s official release date!

First of all, Yasmin is honestly such a brilliant character! I loved how you developed her creativity and curiosity, and the way it was always supported and encouraged by her family. Where did these characters come from and how did you develop them?

Saadia: Thank you, I’m glad you like her! Yasmin was inspired by my daughter, and not just the creativity but also the frustration that comes very naturally when a child wants to do something but isn’t successful on the first try. My daughter, now 9, has always been very imaginative but when she was younger she was also prone to tantrums when things weren’t going smoothly. Actually, most kids in that age group are. I really wanted Yasmin to be a reflection of her readers: kids who may be South Asian, kids who may be first-generation American, and kids who may be Muslim. In fact, Yasmin is a reflection of childhood itself: she’s curious and creative, but she also has self-doubt and gets bored or dejected easily.

During the book, Yasmin dabbles in some very creative roles. Is there a reason why you specifically chose them?

Saadia: There were a couple of reasons. Since Yasmin was inspired by my daughter, I naturally look to her for story ideas. She’s always doing something creative, both at home and at school, so Yasmin sort of follows that trend as well. But I think it’s nothing special to my daughter because I know many children in their first decade are very creative as they learn about the world around them. The second reason is that I really want to encourage creative pursuits in the South Asian community through my books. I know many South Asian parents prefer their children to go into scientific fields, and it’s very disappointing to me that we don’t put as much emphasis on creative arts as career choices. So I’ve tried to show Yasmin doing creative things, such as painting or sewing, to remind our future generations that art is also a good path to follow if you so choose.

What do you hope readers take away from Meet Yasmin?

Saadia: I hope that Muslim/South Asian kids will find self-affirmation in the Yasmin series. They’ll see themselves in the pages of a book that’s in their school library or their local bookstore, and it will improve their self-esteem. We, too, have stories to tell, and these stories have value. It makes a huge difference to early readers to read positive books about characters they can identify with, and I hope I’ve created a universe that’s very familiar to them. I also hope that all other children will be able to understand and empathize with their Muslim/South Asian peers better because of Yasmin. They’ll see a culture that’s different from theirs as a normal part of the books they’re reading, and it will help create tolerance and diversity in their thought process as they grow older.

Going from writing for adults to young children is quite a drastic shift? What prompted it?

Saadia: I still write for adults. I have another short story collection for adults in the works, and I still submit work to literary journals. I decide on a story I want to tell, and then I figure out what character or age group would be the best to tell that story. I really don’t see the two audiences as different, nor do I consider jumping from adult to children’s fiction as much of a change. Much of the writing process is the same, and how I plot or what topics I decide to highlight are universal: first generation cultural changes, food, family, and more. To me, it’s all part of my activism. I write stories to share my perspective, to bring about some positive change through storytelling, and that goal is the same regardless of who I’m writing for.

Are there any challenges writing for children has that writing for adults doesn’t? Or vice versa?

Saadia: I’d say writing for children is harder and more complicated, especially if there is art involved. One has to create complex characters and complete plots with only 500 words in the case of an early reader or a picture book. If there are illustrations, they have to work together to tell the story, so you have to work closely with the design team to ensure that happens. And of course, if you read my adult work you’ll see that I tend to write characters who curse a lot. That’s something I have to curb in my children’s writing!

Speaking of the art, Hatem Aly is a really great artist. How did that partnership come about?

Saadia: I’m indeed very blessed to have Hatem working on this project with me, not only because he’s such a talented artist but because he’s from a Middle Eastern background. He knows what I want to portray without my having to use words. You’ll find that the art in Yasmin is really seamless in how it portrays culture and religion without being part of the stories themselves. Like in Yasmin the Explorer when the mother and daughter go out to the farmer’s market, he’s drawn Mama putting on her hijab while Yasmin puts on her shoes. It’s such an ordinary action, one that millions of kids see their moms do every single day, but it’s something that can be a starting point for a discussion for other children. Hatem is very much in tune with what we’re trying to do with this series and I’m very grateful for that.

You mentioned that you are an interfaith activist. What does that entail?

Saadia: It’s just a fancy word for talking to people of different faiths. I love meeting people and bringing them together to discuss the similarities in their religious and cultural backgrounds. As part of my efforts, I’ve co-founded a local women’s interfaith discussion group in Houston that’s been meeting for more than six years now. I also train various organizations about stereotyping and Islamophobia, and recently was featured in O Magazine for my training. It’s really all about getting to know someone different than you so that we can all become friends instead of fearing or hating “the other.” Anyone can be an interfaith activist, all you need is a big heart and a sense of determination.

Do you find that your work as an interfaith activist feeds into your books?

Saadia: Absolutely! I try to use my writing for the same purpose as my activism: to spread understanding and share perspectives. I’ve seen first-hand how quickly children learn bigotry from their parents or other adults. My son has been called a terrorist in school by his peers, and my daughter often worries about having brown skin. It’s heartbreaking, but as a writer, I feel empowered to create stories that can show a different sort of reality. Kids who read about different cultures appreciate those cultures more, and in general become more empathic, I believe. Storytelling has a certain way of breaking down barriers and helping us see each other as humans instead of headlines. If Yasmin and my other books can change mindsets in even a small way, then I will have accomplished my activist goals.

Do you have any recommendations for diverse children’s literature we should read as we wait for more Yasmin?

Saadia: There are so many Muslim writers putting out great children’s books right now: Hena Khan, Jamilah Thompkins-Bigelow, Karuna Riazi, Canadian writer S.K. Ali, British writer Naima B. Roberts, and others. It’s important to remember that even within the Muslim community there is such diversity and richness, that you may read a book by a Bangladeshi or Pakistani writer, or by an African American writer, or even a white Muslim writer. The more diversity we have within our own writing, the richer and more accurate our representation within children’s literature. Our readers will definitely benefit.