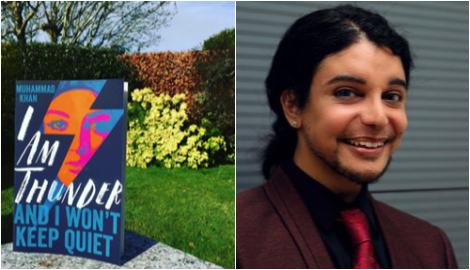 I recently had the amazing opportunity to sit down with author Muhammad Khan. A maths teacher from South London, Muhammad Khan’s debut novel I Am Thunder is a harrowing and realistic portrayal of a young Muslim teenager being radicalized by a terrorist cell.

The protagonist, Muzna, dreams of becoming a novelist. 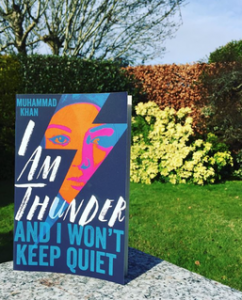 Her parents want her to become a doctor and are oblivious to Muzna’s actual dreams.

When she moves to a new school, Muzna’s low self esteem is thrown into overdrive. She feels she is too big, too ugly and will never become popular

However, when high school heartthrob Arif starts up a relationship with her, Muzna begins to think that all of her self doubt was for nought.

Muzna becomes completely devoted to Arif, and when Arif’s strange and serious brother becomes involved in their relationship, a tiny worm of doubt begins to wriggle into Muzna’s brain.

She’s right: not only is Arif harbouring a very dark secret, his brother is hiding an even more sinister one. As Muzna finds herself tangled into a dangerous web of lies and deceit, she begins to wonder if she can make it out of this nightmare alive.

It’s an important book that I think everyone would love. Enjoy the interview below:

Lucas: I Am Thunder is an intense novel, yet it also has a lot of humour and hope. As a High School Librarian in South London, I could recognise a lot of the teens in the novel.  I feel like whenever I speak to adults who don’t work in a high school, I spend a lot of time defending the students, explaining how funny, smart and empathetic they are, simply because we often only see the negative side of teens in the media, literature or TV. Do you agree that teens are often misrepresented in these mediums?

Muhammad Khan: Yes, sadly that’s often the case. I became a teacher and later a YA novelist because I think teenagers are just the coolest bunch of people. They are so honest and sincere: what you see is what you get. If they don’t like you or your subject they’ll let you know. But the beautiful thing is that they’ll also give you a chance to change their minds. If you take the time to connect with them by taking an interest in them as individuals, you’re halfway there. It’s the most rewarding thing in the world for a teacher to help students nurture their talents—hidden or otherwise. I guess that’s what I’m trying to do with my books: help young people recognise that you can win at life no matter who you are.

L: Did you rely on your own students’ experiences to help create the one Muzna has in I Am Thunder, and what other research did you carry out to write this novel? 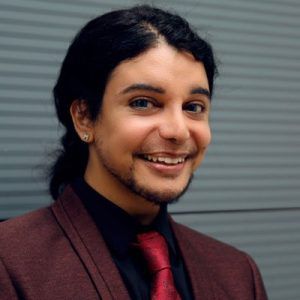 MK: I carried out lots of research just because the topic was so incredibly sensitive, but yes, I primarily based Muzna on some of my students. In fact, virtually every character in the book has a real-life counterpart! I felt it was important because their voices were not being heard.

When you write about your own community, you can add so many layers of nuance and detail. I also underwent Prevent Duty training, as all teachers do. When I was at university, there was an older student who tried to radicalise some of us. He was eventually banned from campus, but it’s frightening to think that intelligent people can get mixed up in the madness of extremism.

Of course, ultimately I Am Thunder is a work of fiction, so I tried to balance realism with keeping the reader hooked. I set out to write an anti-Islamophobia and anti-radicalisation book to protect young people from hate but I didn’t want it to be ‘preachy’.

LM: This is the first UKYA book I’ve read (and I’ve read a lot) where a Muslim character is the hero. Who are the authors that made you feel that you were being included in published work and did they inspire you to create Muzna?

MK: You know, that was exactly what my students said too! They wanted to know why the hero never looked like them. After hearing that I had to write Muzna’s story.

When I was a kid, my school library didn’t stock books by British authors of colour. The best we had were relatively old books by U.S. authors. Minfong Ho and Rosa Guy made me believe a different culture/experience was something to be proud of. Until that moment, I always wrote stories about white protagonists because that’s all I ever saw reflected in books, TV, and film. I suspect Muzna may subconsciously have been inspired by Jinda from the brilliant Rice Without Rain.

L: Muzna’s parents want her to become a doctor even though secretly she wants to become a novelist, a profession she knows they won’t approve of. Most parents probably want their children to succeed and have stable jobs out of concern for their well being. Do you agree with this and was this your experience growing up? Did you feel pressure to become something you didn’t want to be?

MK: Yes. My dad wanted me to become an engineer, but unlike Muzna I wasn’t brave enough to say no. I’d like to point out that wanting your child to become a doctor, engineer, or lawyer comes from a belief that these professions will offer security, respect and freedom. Parents want to protect their children from the hardship they might have faced in their own lives. So this desire comes from a place of love as opposed to the pushy Stage Mom/Dad presence trying to relive their ill spent youth through their child.

When I became a teacher and heard some of my students talking about feeling pressure to follow a certain career path, I thought it might be helpful to address this in my book. I think finding a character going through similar experiences can be very comforting. Ultimately a person’s wellbeing is paramount. We all have different talents, it’s finding a job that fits those unique aspects of who we are that provide the greatest satisfaction.

L: Muzna has to struggle with Islamaphobia, radicalisation, her parents’ desire for her to “act like a girl from back home [Pakistan]” and all of the pressures that an average teenager must endure. This was a stark reminder for me personally so I was wondering how cognisant you think society is of these extra pressures that young people from diverse backgrounds and faiths are under on a daily basis. Do you feel schools and educators should be doing more to acknowledge this?

MK: First of all I just want to point out that not all young people from diverse backgrounds face the pressures Muzna faces, but some of them do and I certainly did. I wanted to be a voice for this minority because we often face erasure or are believed to be inferior to those who have chosen assimilation over integration. Britain is proud of being a multicultural society. I do think it would be incredibly helpful if schools underwent more sensitivity training around the tapestry of cultures that reside in Britain.

L: What is one thing you’d like for a teenager to take away from I Am Thunder?

MK: First and foremost that Islam and terrorism are never, ever the same thing.

Secondly, that greatness can come from humble beginnings. Muzna has more problems than most of us ever will but she rises above them all to become a true hero. Everyone has a spark of greatness inside them, you just need to be kind to yourself and discover your inner thunder.

That was two things. Sorry!

L: Thank you so much for taking the time to speak with me today!

MK: Thank you for having me, Lucas. I really enjoyed this interview and I think it’s so cool that you’re both a librarian and journalist. 😊