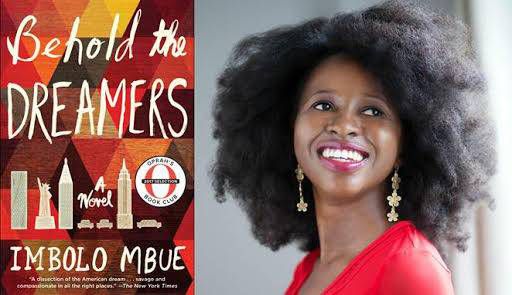 Behold the Dreamers by Imbolo Mbue is Oprah’s 2017 Summer Book Club pick. If you haven’t already read it (and there’s every chance you have, considering Mbue won the PEN/Faulkner Award and is universally praised) it is the story of two families in New York City whose lives become entwined during the economic crisis of 2008.

The Jongas are struggling Cameroonian immigrants whose circumstances improve when Jende Jonga lands a job as the chauffeur for a top Lehman Brothers’ exec. He and his wife get to know the members of the wealthy Edwards family – Jende spends his days picking up and dropping off Clark, Clark’s wife and two children, while Neni helps care part-time for the Edwards’ youngest son. Behold the Dreamers explores the complicated relationships that exist between the wealthiest 1% and the people they employ.

But the novel is about much more than that. It is about the importance of family, of working hard and, ultimately, what we’re each willing to sacrifice in order to attain the “American Dream”..Her characters are so real you expect to bump into them on the street. And Behold the Dreamers is the best novel I’ve listened to this year.

I had the chance to ask Imbolo Mbue some questions about her home, first impressions of the United States and her wonderful book.

I was very homesick when I first arrived here at 17 but there were many things about America that fascinated me. One of my favorite things was that television was all in English. Growing up an English speaker in a predominantly French-speaking country, I couldn’t understand most TV shows since they were in French, so coming to America allowed me to enjoy such a simple pleasure. And speaking of TV, I loved late night comedy—I couldn’t believe how American comedians were ridiculing powerful people on TV; such a thing was very rare in Cameroon. As for what I missed, I spent many cold nights longing to be back in my seaside hometown of Limbe, hanging out with family and friends on a warm afternoon.

Do you get to go back to Cameroon often?  What has been your families’ and friends’ response to your novel? Have they read it? Are they excited about it being chosen for Oprah’s Book Club?

I am hoping to go back to Cameroon later this year. I don’t believe the novel is available for sale there but there are certainly people there who’ve read it, and they had the kindest things to say to me about it. It brings me great joy to see how much the PEN/Faulkner Award and the Oprah Book Club selection means to my family and friends and fellow Cameroonians both at home and abroad. I wish more people knew about Cameroon—it’s such a beautiful country with warm, friendly people.

BEHOLD THE DREAMERS seems to be about two different families who, in pursuit of their dreams, are forced (or feel forced) into sacrificing what they value most. This is true of the Edwards, but it’s also true of the Jongas. These parents want what’s best for their children, they want to give them better lives, for them to grow up to be successful and happy, to preserve their families because family is everything, to not have to struggle. Their dreams are very similar, but play out in different scales. When you began writing did you know this was what you wanted to write about? Or did it unfold gradually? And how did you choose the title BEHOLD THE DREAMERS?

No, I didn’t have a full idea of what I wanted to write about when I first started in 2011. All I knew is that I wanted to tell a story about two men—one a Lehman Brothers executive, the other his Cameroonian immigrant chauffeur—and their families, and how the financial crisis affected their lives. I simply allowed the story to flow and unfold to the point where it because BEHOLD THE DREAMERS, a journey which took me five years to complete. As for the title, it was inspired by the Langston Hughes poem “Let America be America Again.” I couldn’t get over the line “let America be the dream the dreamers dreamed.” As much as the novel is about family and class and marriage and immigration, amongst other things, I ultimately decided that the dreams of the characters was what was at the center of the story.

One of your characters says “This country no longer has room for people like us.” Lehman Brothers closed in 2008, so your story is set almost a decade ago. Immigration is such an important issue in BEHOLD THE DREAMERS – and it’s such a hot button topic today.  Has anything changed? What I mean is, if you were to set your story in 2017, do you think Jende Jonga and Neni’s experiences would be different (better or worse) if they were to come to New York City today?  Or would their situation be exactly the same?  Could you explain why?

I was recently asked this question at a library event, about if the story would be the same if I’d written it today. I wish I could say I’d given a strong, coherent answer but I can’t—I struggled with the answer and can’t even remember what I said. But then, after the event, a sweet lady came up to me and said that whatever my answer was, it was the wrong answer. “If you’d written this story today,” she said, “it would be the same story because you’d write it with the same honesty with which you first began writing it in 2011, because that is the kind of writer you are.” To which I said, thank you.

Are you currently working on another book or are you taking time to enjoy the success of BEHOLD THE DREAMERS?

I’m doing a lot of talking about BEHOLD THE DREAMERS, so I’ve barely done any writing this year.

Who are your favorite writers?  Are you reading anything at the moment that you would recommend?

I have a ton of favorite writers, the newest of whom is Sherman Alexie. I know I’m late to this party but I only recently read his short story in the New Yorker about a hotel maid, and was completely hooked on his brilliance. I’m currently reading WAR DANCES and plan to follow it with his memoir, YOU DON’T HAVE TO SAY YOU LOVE ME. I’m also currently reading Jessica Yu’s beautiful GARDEN OF THE LOST AND ABANDONED, which will be published in November.

Thank you so much for your time.