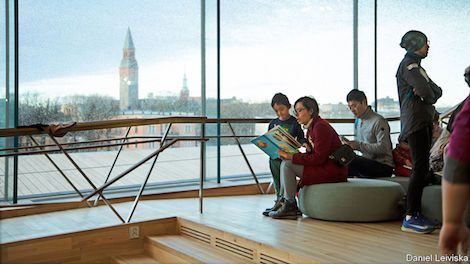 Enter to win our giveaway of $100 to spend at Amazon!

VISITORS TO Oodi (meaning “ode”), Helsinki’s new central library, will find few books on its shelves: since it opened in December, a staggering 70% of the 100,000-odd collection has been borrowed. “The children’s section was left completely bare,” says Anna-Maria Soininvaara, the library’s director. Around 420,000 people, equivalent to roughly 60% of the city’s population, visited the library in its first month. On a Tuesday afternoon, the building is heaving.

This library impresses me the more and more I learn about it.

The late Michael Crichton’s literary archive and production company has authorized a sequel to his breakthrough novel “The Andromeda Strain.”

HarperCollins Publishers announced Tuesday that “The Andromeda Evolution” will come out Nov. 12. The book will be a collaboration between science fiction author Daniel H. Wilson and CrichtonSun LLC., for which the author’s widow, Sherri Crichton, serves as CEO.

The small independent press Valancourt Books has been in operation since 2005 with one goal: Bringing long-forgotten books back into print in order to allow a new generation to rediscover them. In April, Valancourt is launching a new limited series of five neglected paperback horror novels from the 70s and 80s that encapsulates their mission.