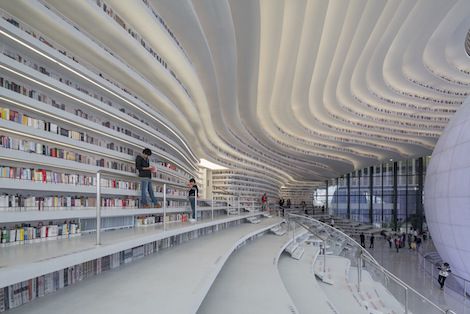 Critical Linking is sponsored by The Art of Escaping by Erin Callahan.

The Tianjin Binhai Library in China is a breathtaking work of modern architecture which aims to inspire enjoyment of the arts.

The unique design of the five-level 33,700 meter square (362,743 square foot) building creates an eye when viewed from the outside. The contours inside create a shell holding a pearl at its center. This shell is made up of terraced layers of bookshelves, stacked on top of each other in curves that reach from the ground floor all the way to the ceiling.

Sources say a deal is expected shortly. Zemeckis will also pen the script, with his partner Jack Rapke producing through their banner ImageMovers, along with Alfonso Cuaron and Guillermo del Toro. Del Toro had long been attached to direct, but a scheduling conflict led the Oscar winner to vacate the director’s chair.

Montgomery’s characters became her own shining light, a way for her to choose happiness. Like their author, these girls and women chose each day to focus on what’s beautiful, knowing that not everything would be perfect. It is this depth of storytelling that has allowed Montgomery’s work to continue to appeal to new fans, offering something timeless and magical to everyone who encounters the story: hope.

A really lovely piece on L.M. Montgomery and the history of Anne of Green Gables.