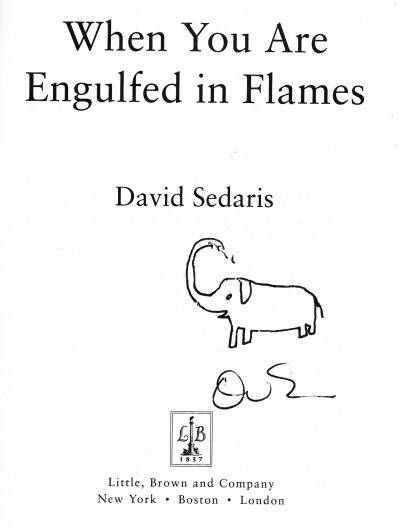 I’ve kept a copy of Edie: American Girl for twenty years purely on the basis of its impeccable, delectable inscription. (OK, maybe George Plimpton also had something to do with it.) Soon after I moved to New York, a dear friend sent the biography to me with these words looping giddily up front: “This is the definitive guide to Manhattan living . . . DO see through the chicanery of pretentious, pouty, opportunistic pop artists. DON’T have amphetamines for breakfast.”

Stellar advice on both counts.

Something about that winking humor gives all of ol’ Edie a glow. I’d far rather have that scrawl than a doodle by Warhol or a lipstick print from Ms. Sedgwick herself. The right inscription transforms a welcome book into a treasure.

There’s something especially thrilling about the first significant inscription you get from new friends or fresh infatuations. Will they write an endearment, an in-joke? Will they make it count? “Amantissima et delectissima” . . . leave the Latin a mystery, better that way.

Anne Fadiman memorably confessed how she puzzled over the first inscription from the man who would become her husband. It read: “To a new true friend.” Anyone who’s ever had an unspoken crush knows just how infuriatingly vague that is! Five words holding infinite promise and pink-eared confusion.

I’ll lay odds that Ms. Fadiman is an exceptional inscriptor. (Inscriptress? Flyleaf artist?) And I yearn to know what kinds of inscriptions certain authors write to their friends and lovers. There’s something so intimate about a message in a gifted book, that small but telling window. If they’re inscribing in their own books, do they toss in that silly nickname? If it’s someone else’s work, will they suggest what they love about it? It’s a dizzying bit of code-cracking.

Hemingway, for instance—what pidgen English quip would he scribble in a book he gave to Marlene “the Kraut” Dietrich? What would Kingsley Amis write in a novel he’d send to Philip Larkin? I picture Peter Beard sketching a crocodile and smearing the ink with his thumb.

Antiquarian and used bookshops can divulge all sorts of curiosities. I’m waiting for someone to find a Nora Ephron paperback inscribed to her shrink. Just last month, inscribed books from the collection of Augusta Leigh, the half-sister and scandalous lover of Lord Byron, appeared in a secondhand shop. And if you’re flush you can buy a first edition of James Thurber’s 1929 breakout, Is Sex Necessary?, in which he wrote: “To Jill / With love and kisses, / giggles, and the pulling / out of chairs from under / ancient conventions; also / with due piety, esteem and / admiration; and finally with / that rarity in art — a / Thurber Man smiling! / Jim.” Who is Jill?!

David Sedaris apparently writes and draws all sorts of fabulously screw-loose things in his fans’ books. Reports roll in from all over the country: “skin cancer for everyone;” “let’s not go to the ball together;” “thank you for making me rich;” “let’s carve a jack-o-lantern by the light of a burning bible.” A drawing of Abraham Lincoln, a sketch of a turtle. If this is what he does for total strangers, what deliciously warped figments end up in the books he gives his own friends or family? Best of all . . . what would he write in a book for Amy Sedaris?

How about you—what are the inscriptions that have most surprised and thrilled you? Any Sedaris-isms to share?