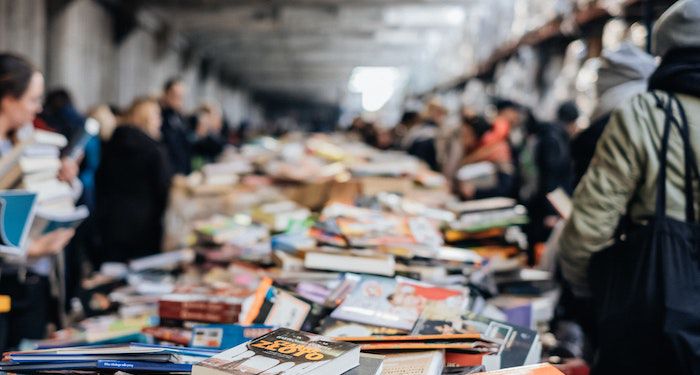 Ah, the Scholastic Book Fair. The smell of new books and erasers. The serious business of circling your chosen books in the flyers. The hum of excitement in a crowd of kids navigating the tables stacked with books and other shiny goodies. They are the epitome of the nostalgic bookish childhood experience. Unfortunately, though, that’s not everyone’s memories of the book fair. Underneath the glossy flyer pages and the nostalgia, school book fairs are also a site of inequality. For poor kids and underfunded schools, those book fairs look very different — and what’s on display has often been far from diverse.

50 years ago, book fairs were a competitive business put on by a variety of companies and organizations. In 1981, Scholastic acquired California School Fairs. By the 1990s they had come out on top as the de facto school book fair provider Now, they host 120,000 fairs a year across the U.S. and 11,000 across Canada (at least, in years where these isn’t a global pandemic). Most schools have these fairs as a fundraising initiative for their school library, and they are usually arranged by the school librarian or the PTA. This can be a great way to get new titles onto the library’s shelves, but it’s not without controversy.

While school book fairs are often looked back on fondly by adult book lovers, they were a very different experience for those who grew up poor. I think the point Elizabeth May makes here is important: for many students, this was when they realized they were poor. School book fairs are a public display of disposable income. For kids looking on at their peers laden down with purchases, it can be a trying and even humiliating experience. It’s also a drawn-out process: from circling those items on the flyer to asking your parents for money to walking around the fair and looking at price tags to seeing your peers show off their hauls, it’s impossible to ignore if you aren’t able to participate.

Parents often feel this weight, too. For families who don’t have a lot of spare money, they may feel pressure to spare their children the embarrassment of not being able to participate, so they cut corners in other ways, giving kids cash they can’t really afford to shield them from that reality. Even for parents who are middle class, school book fairs can be a source of annoyance more than nostalgia: it is school-sponsored consumption, encouraging kids to beg their parents for money that will inevitably be spent on toys or an overpriced book with a LEGO figure embedded in the cover. Many parents have protested against this marketing of toys and other non-book items during the Scholastic Book Fair. It’s hard to imagine any other company that could get this same placement in schools, with catalogues passed out in class and perused during instructional time, not to mention a store placed inside of the building.

Each school book fair is not made equal, either. A few years ago, I ran the Children’s Department of the largest used and new bookstore in Canada. We put on book fairs throughout the city as an alternative to Scholastic: schools got more choice in the books, we could provide used and discounted books to supplement the new titles, and the money stayed local. The inspiration for this post, though, was my dismay at seeing the difference between private schools and underfunded public schools in their bottom lines. For one private school, parents spent an obscene amount of money on these books. They would rack up thousands of dollars in store credit — so much that they never actually spent it all. It would roll over year after year. They already had a decent library budget, after all, and the fairs were more of a fun event than a fundraiser. For another public school that was much less well-funded, they would end up with a couple hundred dollars in store credit. Parents and students didn’t have a lot of spare cash to contribute. The school usually had spent all of the credit during the fair itself by putting aside books to put in their library. It was sometimes their entire year’s book budget.

It became very obvious to me that this was an inescapable cycle. Underfunded schools served communities where families didn’t have a lot of money to spare, meaning that fundraisers would bring in very little. Private schools served wealthy parents, so their fairs would bring in a ton of money that they didn’t need. Underfunded schools can also feel a lot of pressure to try to make the fairs as profitable as possible, because it constitutes the majority of their library budget. Since their students usually have less money, this places a further burden on them.

The Downsides of Scholastic Book Fairs

For this section, I have to admit that I am biased. As I mentioned, I ran a Scholastic Book Fair competitor for years. Still, I no longer do, and I stand by this statement: Scholastic Book Fairs in particular are not great. They only stock Scholastic books, which is a limited pool of titles, and often a huge percentage are franchise tie-in books (Star Wars, My Little Pony, LEGO, etc). They carry too many toys and other plastic nonsense. The $1 pencils and erasers I stand behind completely, but if you browse a Scholastic Book Fair flyer, you’ll see a lot of plastic junk included, some of which is quite pricy. There is not a lot of flexibility in the books schools can request — although there is some wiggle room, it’s not much. It is also a lot of money taken out of your community instead of going to a local bookstore (assuming there is one), where it can keep circulating.

More importantly, though, take it from a pricer of used kids’ books: Scholastic paperbacks are terrible quality. I get it: they’re cheap. But a $1 Dover paperback will last for decades. A $4 Scholastic paperback will fall apart after one reading. The binding is the worst I’ve seen in my bookselling (former) career. Since many schools take their portion of the profits in credit, especially underfunded schools that want that dollar to stretch, that means that they’re only able to select these books that will quickly fall apart in school libraries.

Finally, let’s look at one other aspect of inequality in Scholastic Book Fairs. Think back to those days of circling your choices on the flyers. Which books and authors do you remember? Which ones did you pick out, or which did you want to? If you’re able to get your hands on an old flyer, peruse through and answer me this: how many authors of color are included?

If you, like me, track bookish news, you might remember We Need Diverse Books teaming up with Scholastic for a special flyer edition. Do you remember what led up to this, though? In December of 2016, Scholastic received online backlash for publishing a book called A Birthday Cake for George Washington, which showed enslaved Black people happily preparing for and celebrating Washington’s birthday (#SlaveryWithaSmile was the criticism’s hashtag.). This was soon after the A Fine Dessert controversy, although A Birthday Cake for George Washington was written and illustrated by people of color, and it’s worth reading the Kirkus and NPR articles for the nuance of the situation. Scholastic pulled the book, and a month later — at the end of Black History Month — they reached out to We Need Diverse Books. This appears to have been a one-off partnership, but hopefully Scholastic learned from this and is being more deliberate about the books they publish and stock at fairs going forward.

I don’t mean to imply that book fairs should be cancelled. They are one of the few times that kids can pick out books for themselves to own, which makes a huge difference in their literacy and love of reading. I have my own fond memories of school book fairs, and I don’t want fairs to disappear. What I do think, though, is that they should consider each school and their demographic, and adapt so that every student can enjoy them. I don’t have all the answers, but here are some options.

There is no one perfect solution, but it’s worth experimenting to find a strategy that works for each school and their community. In a perfect world, every school would have a fully funded library, which would free up money to provide books for students to take home if they can’t afford it. Until then, we’ll have to keep working within the system to see which compromises are worth it — as long as we’re not too overcome with nostalgia to identify these problems.