“There’s a world in which that was the right answer,” my boyfriend joked over a long round of Trivial Pursuit. It wasn’t the right answer in this articulation of reality, but: sure. In the theory of infinite universes, I am somewhere a surgeon, I was somewhere never born, and I somewhere think Crocs are high fashion; there is a world in which cats are the dominant species on Earth, in which we take care of our neighbors, in which wars never happened; there is a world in which the University of Georgia won the national championship last year, and we hope there are many worlds in which 45 was never elected president.

Anything is possible, everything is somewhere real, and reality is complicated, infinite, and wondrous.

I find the physics side of this a little daunting to contemplate, but it’s fertile ground for fiction, and these five already-out or coming-soon titles are great places to begin reading across the multiverse. 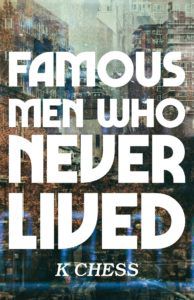 In Famous Men Who Never Lived, a universe parallel to ours experiences a meltdown, but not before its scientists manage to open a hole between worlds and ferry thousands of residents out. These barrier-crossing pioneers have no time to decide: if your number is called, you show up at the portal, and you either enter the unknown or…not. Staying means certain death, but death in a world you know, among people that you love.

Hel chose to go through the portal, leaving behind her son and her illustrious medical career. Now, she is a no one in an unfamiliar world—another Universally Displaced Person on a very long list of people whom most regard as alien and unwelcome. Her partner, Vikram, adjusts to their new settings better, and the books that he brought with him, some of which were never written in this new world, are a great comfort to Hel. That is, until one is stolen. Hel’s efforts to retrieve one of the few artifacts exclusive to her world are gripping; excerpts from the novel (The Pyronauts) are fascinating; and the stories of other UDPs speak eloquently to displacement. This novel is beautiful, thoughtful,  and impossible to forget. It comes out in March, but I’ve already recommended it to everyone I know. 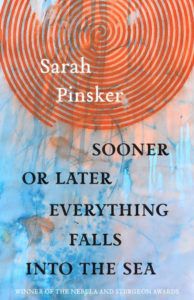 While their stories don’t focus on the multiverse exclusively, both Sooner or Later Everything Falls into the Sea and Quantum Convention have long stories with that theme. In Quantum Convention, a character gathers with other articulations of himself at a convention designed specifically for that purpose; it is both a disorienting and horizon-expanding experience. The last story of Sarah Pinsker’s Sooner or Later Everything Falls into the Sea does this premise one better: the character meeting other versions of herself is, in fact, Sarah, and someone has killed one of the other Sarahs. But before you get to the discovery of why someone would want to take out her mirror image, there are uncanny sortings through the Sarahs’ different choices: who ended up in similar careers, and who deviated? Who is married, who is with Sarah’s seeming soulmate, who is not? Where did Seattle escape destruction? These questions prod the larger question about whether there’s anything essential about who we are. It’s a fantastic trip (and all of the speculative stories that precede this utterly unique murder mystery are equally captivating). 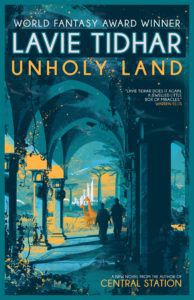 Lavie Tidhar’s Unholy Land doesn’t rush into its multiverse themes; at first, it seems like an alternate history in which there was no Holocaust; Europe’s Jews evaded Hitler’s designs by adopting Zionism earlier, setting up a land in what was Uganda. The country is Palestina, and resultant indictments of colonialism are severe, if without the precise religious complications that arise in Israel. At first, it seems like we’re going to follow the novel’s lead, Lior Tirosh (a pulp writer who’s never achieved much fame), through an existential crisis—but it soon becomes apparent that said crisis has its roots in the fact that Tirosh traverses worlds without much intention, and such traveling has universal implications. Other universe jumpers are tasked with tracking him down, and their own dashes between universes are thrilling, if sometimes nightmarish. They’re also sometimes awe-inducing. 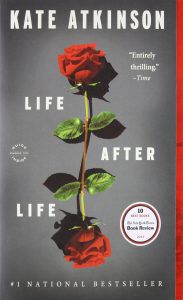 While the above books have multiverse themes that are overt, other books are more…uncertain. I think that Kate Atkinson’s Life After Life COULD qualify—but maybe it’s more of a reincarnation book? The ambiguity here is a plus. The book opens with Ursula Todd having a chance to kill Hitler. The next scene moves back to the turn of the century; Ursula dies while being born. This shifting continues throughout the novel: sometimes Ursula makes it through terrible peril (being born, the ocean waves, the flu pandemic, a violent partner, and wartime), and sometimes she does not, and the clock starts over. Some part of Ursula remains aware of the articulations of herself that came before, which helps her to avoid minefields; this could point to reincarnation, but it could also be a really inventive multiverse proposal. In any case: every page of this massive book is a treat.

Wherever you elect to start with your multiverse reading, you’re bound to encounter humbling and inspiring notions; these imaginative and speculative works are replete with surprises, scientific inventiveness, and hidden delights.