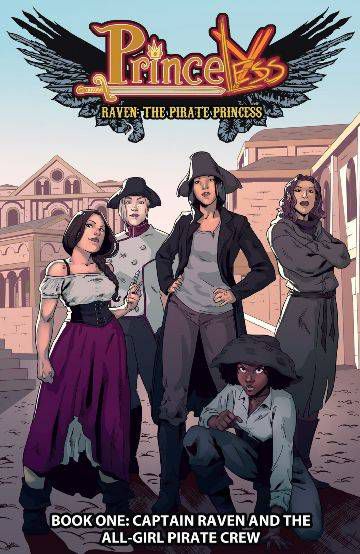 I’ve wanted to be a pirate since I was ten years old. I’m not certain what initially drew me to piracy. Treasure hunting? Sheer lawlessness? Carrying a sword? (It was probably the sword.) Whatever the reason it never faded. Twenty-some years later I still actively search out clothing and accessories bedecked with skulls and crossbones, watch movies like The Princess Bride and Cutthroat Island with far too much regularity, and read as many pirate themed books as possible.

So, when I stumbled upon Princeless – Raven: The Pirate Princess by Jeremy Whitley, Rosy Higgins, and Ted Brandt, thanks to a column by the amazing Mey Rude, I was beyond excited. It’s hard for me to express just how much joy this comic has brought me, but I’m going to try.

Raven Xingtao, also known as the Black Arrow (badass nickname, right?), is introduced in volume 3 of the larger Princeless series when she is rescued from a tower by main character Princess Adrienne Ashe. The two don’t always get along. In fact they fight each other almost as much as they fight the men holding Raven captive. In the end though, they part as “sisters” and Raven goes on to seek revenge against her traitorous brothers.

Raven’s solo title picks up immediately after. Here’s the thing, Princeless – Raven is as close to a perfect comic as I’ve found. For me anyway. Humor? Oh yes. Meta? Waves to Kelly Sue, Marjorie, and Willow. Feminist themes? So, so many. Queer lady pirates who flirt? Hello, sailor. And on top of all of that is the most inclusive cast I’ve ever seen in a comic book. Women of size. Women of color. Straight women. Queer women. Butch women. Femme women. Women of varying ability, religion, and skill set. Oh, and one half-elf.

And it feels natural. None of these characters are around so that the creators can check off a box in the diversity column. Nor are they limited to secondary or minor characters. Raven, Sunshine, Ximena, Jayla, and Katie are the five “main” characters. Four of them are women of color and all but Jayla have displayed some type of queerness. Both Raven and Katie identify as sailors (or pirates), but Sunshine is a dancer and thief, Ximena is a cartographer, and Jayla is a chemist. As to the rest of the crew, while we don’t know them quite as well as the main five, the little details added with each issue point to a depth that many “side” characters never achieve.

I’m particularly enthusiastic about Raven. Despite the general trend of whitewashing in so many forms of media, here we see an Asian woman portrayed as a strong but imperfect leader. She’s not fetishized or tokenized, but is allowed to make mistakes and grow as a character. She’s not always the best fighter or most successful strategic thinker. She stumbles and she leans on the women who surround her. Raven is young, queer, and bent on revenge, but she’s also kind, confident in her own abilities, and willing to listen and enact change.

Historically, piracy existed as an act of resistance. A almost necessary example of a criminalized sub-economy when economies of the world were inherently unequal and exploitive. In issue #2, Katie, while applying to be part of Raven’s crew states that, “A pirate’s real place should be setting right the injustices done to the poor and underprivileged,” and that “The ability to work outside the law is a gift that we should use to strike down tyranny.” The women of Princeless – Raven are from the margins, the underprivileged, the exploited, and they are looking to change things.