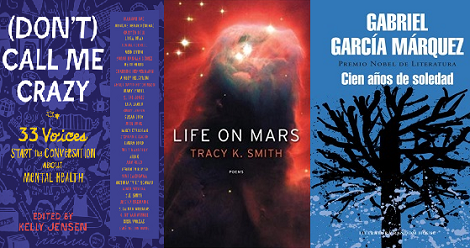 I’m moving from Des Moines to NYC next week, so I’m in the process of packing up my life and, most importantly, my personal library. I’m flying out for a summer program, and my books won’t rejoin me until I’m settled into an apartment sometime in the fall. As you can imagine, this indefinite period of separation has made the packing process more difficult. It’s also driven my reading over the past few weeks as I say goodbye to my local library, choose what to sell or donate, and borrow those last few books from my parents before I move 1,100 miles away from home. 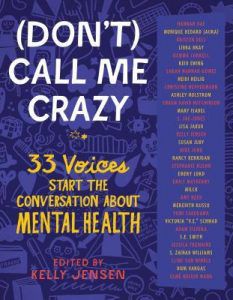 I just got approved for an electronic ARC of this book, the next anthology from Book Riot’s very own Kelly Jensen. This collection features essays on mental health from dozens of writers, including YA authors Adam Silvera, Libba Bray, and Victoria Schwab, and even a few fellow Rioters. I can’t wait to dive in and see how these stories add to contemporary conversations about mental health.

After months on hold, I finally the audiobook from my library, just in time for my last-minute packing frenzy. I don’t read a lot of mysteries, but this one’s received high praise from other Rioters and fits Read Harder task 21 (a mystery by a person of color or LGBTQ+ author). The story follows a black Texas Ranger solving two murders in a small town rife with racial tensions. I’m about 10% in and already loving the southern noir writing style.

I stumbled upon this book while shelving at my local library where I volunteer (volunteered? Sob. Moving is weird). I’d heard of the author through John Green, who’s mentioned Rosenthal as an influential figure in his early writing career. I loved the unconventional format of this memoir, which creatively bounces off of the school subjects that make up its chapters. There’s even an interactive texting component. Rosenthal’s unmatched capacity for wonder struck a deep chord with me—the book felt like a gift. The author passed away in 2017, the year after the book’s publication, which made certain passages all the more poignant. 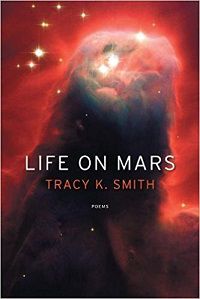 I had never read anything by Tracy K. Smith, but when I found this while shelving in the poetry section, I remembered she’s the current Poet Laureate of the United States. This beautiful collection of spacey poems repeatedly drew me out of myself with awe. There are some incredible lines in here, including this stanza from “No-Fly Zone”: “…Look, I want to say, / The worst thing you can imagine has already / Zipped up its coat and is heading back / Up the road to wherever it came from.”

On Chesil Beach by Ian Mcewan

I hadn’t heard of this book until I watched this interview with Saoirse Ronan about the new movie adaptation in which she’s starring. I checked Libby, and my library had a copy of the audiobook. Set in 1962, this novella follows two virgins on their wedding night, which turns disastrous as the story unpacks their physical and emotional issues. It’s concise and well written, evoking all kinds of emotions and empathy as we witness the pain, sadness, and downright awkwardness of the evening.

The Man Who Loved Clowns by June Rae Wood

A friend gave me this book a few years ago, and I finally got around to reading it (thanks Kayla!). This middle-grade book follows thirteen-year-old Delrita and her Uncle Punky, a man in his 30s living with Down’s syndrome. The author based the story on her relationship with her brother, who also had Down’s syndrome. The result is a sweet, heartfelt, and often sad book about living with and loving those with disabilities. I’ll be dropping it in a little free library before I move in the hope that it continues to foster empathy in future readers.

Technically this is not “on deck.” I have been reading this off and on since September 2017, but this is the week I power through the last third. Why is it taking me so long, you ask? Because I’m actually reading Cien años de soledad, the original Spanish version, which a friend gave me at the end of my year teaching in Spain. It’s a far more ambitious read than the other books I’ve tackled in Spanish—the first three Harry Potter books—so I’m inching along with the help of Shmoop summaries, SpanishDict.com, and the English translation. I really, really, (really) want to finish it before I move.

I started this as an audiobook a few months ago but didn’t care for the narrator’s voice and gave up after the first third. It’s one of my mom’s favorite books, though, so I want to give it another chance before I move—I’ll be borrowing her physical copy, which will be a lot easier now than when I’m in New York. The book follows the title character as she looks back on her seventy-some years of life (hey, that fits Read Harder task 23!). My mom relates a lot to Hannah, whose children all grew up and moved away, which is becoming the story of me and my three siblings—once I move, the closest to home is still a five-hour drive away.