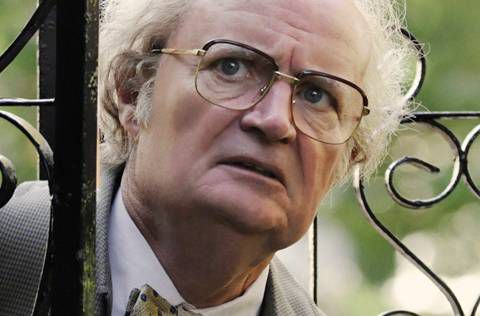 This winter, my Confidence Index on the film of Cloud Atlas was skeptical. OK, OK, I put on my Doubting Jane judgypants and said: “I sense they’re creating a platinum-coated dog’s breakfast.” I’ve just seen the Cloud Atlas trailer. I hope to eat those judgypants.

Of course, there are many dazzling shots: the Papa Song clones unfurling from their shelves; a man diving to a rope atop the mast of a 19th-century ship; Luisa Rey’s VW bug plunging underwater. In true Wachowski form, there are balletic moments of violence and whizbang action sequences. Lots of that “bullet time” slow-motion and time-slice effects, as when a character seems frozen but plates fall and explode around him. (Frobisher’s moment of hearing his inner music?)

But there are also glimpses of great actors being great, especially anything with Jim Broadbent. And glimpses of actors who may surprise us, like Hugh Grant’s freaky Teflon grin in his role as the head of the nuclear reactor. I even love the typeface used for the film’s title.

It’s still not clear whether the three directors kept or dropped David Mitchell’s original nesting-doll structure. Early reports suggested they’d make it linear. But one shot in particular suggests how they may bend the chronology: Whishaw as the composer Frobisher rifling through his 1931 bedroom, and the room then bleeds over to the 1970s hotel room where his old friend Sixsmith sits.

Then play the trailer, don’t actually watch it but just listen to the voices… and it’s still mostly wonderful. Shiver as Hugo Weaving growls “there is a natural order to this world” and swoon over Whishaw’s voice as he says “a half-read book is a half-finished love affair.” The piano music for the “Cloud Atlas Sextet” sounds quite lovely.

Tiny quibbles: Sonmi~451 looks too expressive. No one should make Tom Hanks blond … oh, I’m shutting myself up.

The film is still slated for a late October release. Take a look and tell us what you think!