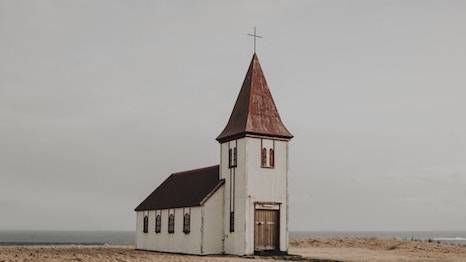 I think I am having a crisis of faith. Or rather, I have plenty of faith but no idea what it’s telling me, what I should call it or where it belongs. In true Hermione Granger style, I’ve been rifling through books to try to come to terms with my introspection—but since I have no idea how I got here, even the library feels like a labyrinth. Books alone might not be the answer. Let me explain.

I was born and raised in the Republic of Ireland. In the 1990s, we were still heavily under the thumb of the Catholic Church. When I was born, divorce, abortion, and suicide were illegal, as was homosexual activity. The photographs from that time tell a story of the prominence of the Catholic Church—when Ireland went to the polls to legalize divorce in 1995, parades of the religious walked the streets, statues of the Virgin Mary held aloft, insisting that marriage is a contract before God and should never be voided. The fervor was intense.

I made my first Holy Communion in 1997; I was six years old. Small girls in white dresses paraded down the aisle to accept get communion. We were forced to confess our sins to a priest. At age 6, I had to make up sins—I was mean to my brother and I swore at the cat. We didn’t even have a cat, so then I had made a sinner of myself for lying. Each week we were sent to Mass and tested in the classroom; shamed if it was discovered that we hadn’t actually been. There was a lot of guilt. 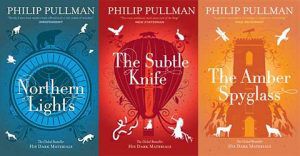 By 12, I was beginning to question everything, thanks in no small part to Philip Pullman’s His Dark Materials. The year I was Confirmed, endless hours were spent on religious instruction in school. To this day, I can recite endless sections of religious doctrines, prayers and hymns in English, Irish, and Latin, but my capacity for basic mathematics has been consigned to history. There was no choice involved.

Though Ireland voted for marriage equality in 2015, abortion remains mostly not just illegal, but unconstitutional. In 2012, a woman in the midst of a miscarriage who sought an abortion in Ireland was rebuffed and told “Ireland is a Catholic country.” She died, and she was not the first or last woman to suffer. 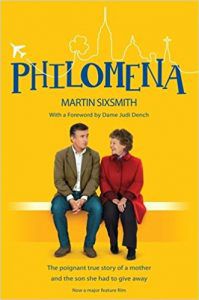 By the time I was 15, reports, already long rumored, had trickled through Irish society and communities—stories of single mothers locked up by religious orders, enslaved in Laundries across the state, their babies taken from them, sold or sent away. Perhaps the most popular book about it is Philomena, the story of a woman who seeks her long-lost son with a stubbornness that is resolutely Irish, but the New York Times has recently also shone a light on more recent discoveries, with longform journalism about the volume of infant remains buried near infamous “Mother and Baby Homes.” That’s plural—there isn’t just one. 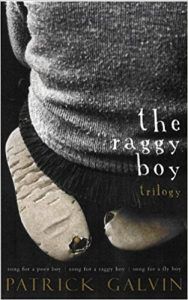 Physical and sexual abuse of minors may have hit the headlines in Boston with the Spotlight reports, but in Ireland it was long known and long hidden- it features heavily in the wonderful Song for a Raggy Boy—Patrick Galvin grew up in the town I was born in, and his story is shared by many of his generation. Abuse was endemic and as a teenager finding my way in the world, I couldn’t separate belief from buildings. My anger grew and grew. Even now, looking at the cover of Galvin’s book, 15 years since I read it, my heart splits.

I took a trip to Lourdes at 18, volunteering with disabled people to ensure they could gain something from the pilgrimage experience—but I felt nothing but horror at what I witnessed. Solid gold statues, magnificent artwork, beautiful pillars of marble—a richness that doesn’t trickle to the billion Catholics worldwide, many of whom live in abject poverty and pain- many of whom had languished in Ireland for generations without solace. It hurt my soul. When I came back from Lourdes, I ended my relationship with Catholicism—I wanted freedom from doctrine. I sought relief and left any sense of faith behind. My pilgrimage ended. 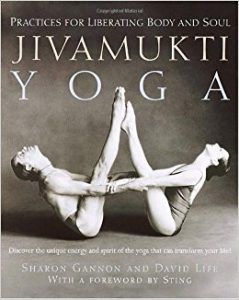 But of course, we can’t push away the past for too long, and we can’t unlearn what we know. My sense that there’s something bigger in the world never went away; there’s something amazing everywhere I look. When I started practicing yoga, I got the same feeling of peace on the mat that I get when I walk into a church—I’ve come to learn that I love yoga precisely when it has a sense of spirit, meditation and introspection. Without those elements, I’m just stretching and it’s not the same. Jivamukti Yoga made that so obvious to me that I can’t believe I needed a book to realise it.

I know now that I find something I admire in every world religion. I believe in the core concepts of kindness, love and gratitude to myself and others. I believe in trying to be a good person, in being non-violent, in being kind to the planet. That sense of peace I find on the mat and in the Church? I also find it when I’m scrambling through the undergrowth on my hikes, or watching the stars at night in wonder. These things might not be religious prayer as I was taught it as a child, but they’re a form of faith in myself and others, and in the world around me. Does that not count? Is it worth less because it’s not formal and tiered.

All prophets and gods are harbingers and every religion has stories that teach important lessons, from the Quran to the Bhagavad Gita to the Norse Gods. I’ve been thinking about it for months and that’s how I ended up here, in a labyrinth of books, seeking clarity. Where do I fit? Do I even have to fit somewhere precise? 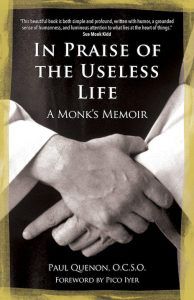 I recently read In Praise of a Useless Life by Paul Quenon, a Trappist monk at Gethsemeni in Kentucky. He talks about choosing a lift of freedom within four walls, a stubborn poverty which allows him the absolute freedom to experience God. His God isn’t the God I remember from my childhood—his God is one of mindfulness, writing, poetry and personal gratitude. A life of quiet reflection, no more nor less. For the first time in a long time, Catholicism had some relevance to me when I read those pages. I have had a Vipassana retreat on my bucket list for some time and this book made me want it more and more. I crave the silence, the reality of being alone with myself; the challenge of facing my own brain, toe to toe. 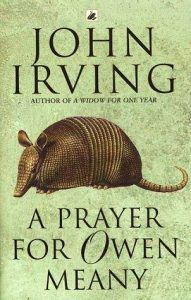 Last year I read A Prayer for Owen Meany– Meany’s frequent refrain that he is AN INSTRUMENT OF GOD filled my heart in a way few other books have and his determination to be of service to others precisely when required was a joy to read. Elizabeth Gilbert’s Eat Pray Love is an exploration of herself and her openness about what faith means was refreshing; God doesn’t have to be the white haired, cruel, and vengeful white man I remember from religious instruction.

Gilbert raised the excellent point that people of faith are often rejected, frowned upon, or judged. I realize that for a long time I have stood on the side of the judges. I want to change that.

My commitment to feminism, marriage equality, and being a solid LGBTQ ally doesn’t mean I can’t believe in something else. The boat of Catholicism has departed without me, and that’s okay—but in the past decade I have developed a series of deep convictions that are part of many religions and none. I can’t say I’m religious, but that doesn’t mean I believe in nothing.

My own life in Ireland has made me mistrustful of organized religion and I don’t think that will change—but I mistook that anger for atheism and I was wrong. I am wary of religious fervor and I’m a wild, loud proponent of the separation of church and state—but the Church building, the institution, the preacher, and the Book don’t inspire me or make me believe in anything at all. What I believe is intrinsically personal and desperately intimate. Maybe I don’t fit anywhere at all; maybe I don’t have to. For the first time in my life, no book has the answer.

My mother confided recently that she wants to walk the Camino de Santiago. I asked her to take me with her and she agreed. Of course, this necessitates a return to the library, but I’m confident that at least there’ll be a map I can follow this time.

You can read about Ireland’s vote for marriage equality in Crossing the Threshold: The Story of the Marriage Equality Movement. You can read more about reproductive rights in Ireland in Repealing the 8th: Reforming Irish Abortion Law.

I’m interested to read books about different religions and faith systems from Thich Nhat Hanh to Desmond Tutu—please leave me some recommendations for authors or titles that I should check out.