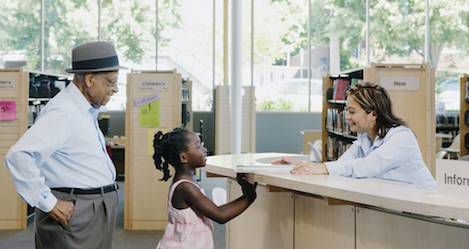 My boss asks me for a librarian’s perspective on an audio books purveyor. I hesitate. Then comes a disclaimer that I immediately regret: “I don’t have an MLS, you know.”

This insecurity is new, and exists apart from the pride I take in having worked for several years in libraries, though I’m degreed in other topics. And I find it’s a sore spot for other non-degreed librarians as well, a gift of the unspoken line that seems to exist when you gather any group of library workers together: those who studied this work versus those who merely live it.

Yet I’m convinced that no librarian should feel inadequate for learning the discipline on the ground rather than in a classroom, not only because library work requires creativity and understanding that you develop best once you’ve gotten to know your particular community and its needs. It doesn’t matter to a group of six year olds whether the person coaching them through weekly crafts, singing them songs, and doing the voices at story times has a degree or not: they revel in the interaction, period. They grow from that, our CVs aside.

And no patron ever paused prior to asking for directions through the stacks, or for a recommendation for a book like-this-one, to verify my MLS credentials, or lack thereof. Library theory isn’t at the fore when you’re  helping someone navigate the computer for an online application, or when you’re putting together a display to feature underloved books. It is beside the point when a patron has a crisis, or when you’re helping a line of children check in during summer reading. You’re there for the love of it—that’s what patrons sense; that is the essence of the work.

But that statement–the idea that librarians can be driven primarily by a love of books–is also a surefire way to draw ire from (some) MLSes. You’re handed back an immediate, often scornful, “that’s not all libraries are about.” No kidding—but it is what holds a library clerks’ center during the tough moments, when you’re getting screamed at over fines, or when someone has defaced library property yet again, or, more and more frequently, when you’re facing drastic budget cuts, even closures, because local politicians DON’T love books, or understand how vital access to libraries is for a healthy community. Love of books might not be the science behind the institutions; it is at the heart of them.

Why else do we fight to keep libraries open? It’s love of books that breeds awareness that the right title, at the right time, can change someone’s life–and that you shouldn’t have to be wealthy to have a place to find such titles. It’s love of books that makes librarians encourage children to find the fun, illumining center in a story–that leads to puppet shows and sing-alongs, to seasonal reading checklists with associated rewards. Most of us had our lives transformed by pages at some point; that’s why we returned, that’s why we want to contribute behind the desk. Library work is giving back, in nerdy, hopeful form.

Love of books is what makes librarians who struggle with bills hold on to their jobs–because those at the front lines of battles with bureaucracy aren’t there to bank, they’re there to make a difference. Politicians work to keep public library funds low, squeeze them down until they’re next to nonexistent, and non-degreed librarians stay. They’re the most vulnerable when cuts come, they’re the last to receive a raise, but they’re there to protect the idea, the practice, and the space provided by public collections.

My former library co-workers are warriors for ideas, battling for open access to information and safe spaces for those who come to seek it. We didn’t treat each other differently based on who studied the topic in school or who didn’t; we were all fighting the same battles, against the same information-indifferent forces, and it was our commitment to sustaining that fight that mattered.  No one was giving anyone crap for showing up on Monday “just” for love of books.

So I think I’m done treating the space that develops between MLSes and non-degreed librarians upon first meeting as relevant or meaningful. I have opinions on how libraries run, and on what librarians need, that I developed those over years of library work. I’m no longer going to introduce those ideas with a caveat. They are both valid and experiential.

To the women and men still working in libraries, still protecting public access to research materials, media, and novels galore: thank you for loving books enough to fight that fight. Nothing matters more.