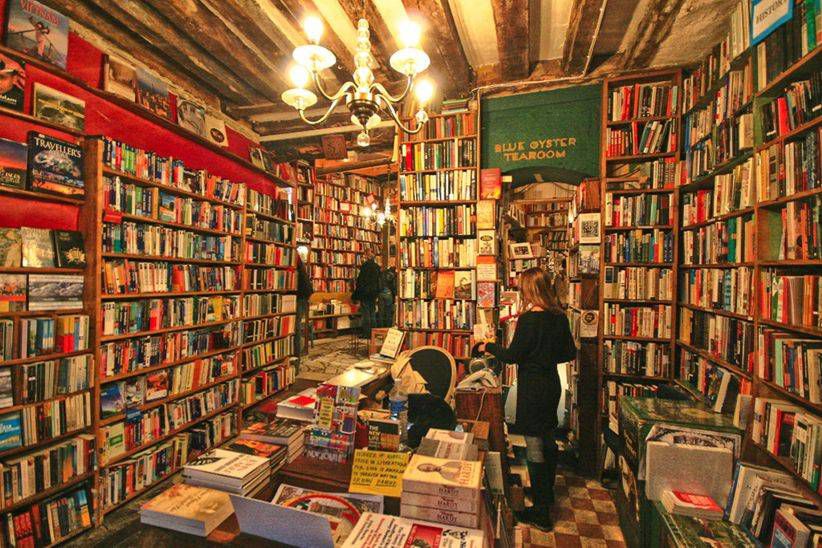 The first thing I want to talk about is my very favorite bookshop in the world. You’ll never be able to visit it any more thoroughly than I have, because it’s completely fictional. That’s okay, though. I don’t see any reason why something like “existing” needs ever get in the way of me enjoying something.

My favorite bookshop was featured all-too-briefly in the movie Hugo, a remarkable movie by Martin Scorsese (based on Brian Selznick’s book, The Invention of Hugo Cabret) which had a plot for a little bit and then wandered off into a passionate love letter to old films. Briefly, in the middle, we enter a bookshop which is based in this idyllic Parisian train station. It is a long narrow space with tall bookshelf-ladders (remember those? I miss those) and winding iron-wrought staircases going to higher levels. All of the tomes in the shop are hardbacked and gilt-inscribed, interrupted only by the occasional bust of a statue. Sitting up front at a tall, almost magisterial desk, there is Christopher Lee, resplendent in a suit and beard.

The shelves are full of books and there are stacks of books tactfully all over the place, like little mountain ranges. It’s lovely. look at it. just LOOK at it

As I said, it’s not in the film very long. If I could, I would crawl into the screen and go live in that train station, that bookstore. I dunno if there’s a heaven, but I’d quite like it to be a golden-lit bookstore staffed by Christopher Lee, thanks.

But the reason I bring it up…are those stacks of books.

And that’s because I just don’t want to see them anymore.

I want to compare this idyllic movie-bookshop to a real bookshop which is just a few blocks down the street from me. I am fortunate, in this part of the Seattle area, to have an abundance of indie bookstores. I have three within five minutes of me. Of these, two of them are disasters, and for both of them, the reason is organization.

There are books on shelves, but there are also heaps and stacks everywhere. In one bookstore, not only were there so many books and shelves crammed into a tiny location, it was claustrophobic to navigate…but on my last visit, I discovered I couldn’t look at Fiction past the letter M because there was a massive wheeled cart blocking the shelves, and so overloaded with books, there was no possibility of moving it out of the way.

It’s like that everywhere in these shops. I probably don’t need to describe them in too much detail, because you can imagine them. This is a really common phenomenon with bookstores. Frequently used bookshops, sometimes used-and-new. Heaps and piles of books everywhere.

The other shop in question here is likewise a wreck. Some shelves, but lots and lots of stacks everywhere, and if they’re in any discernible order, then it’s one which I am unable to crack. The last time I was in there, I found a Dickens biography (what else) at the bottom of a stack. I stared at it, realized I’d have to move a whole other stack just to dig in this one without avalanche…and I gave up and just didn’t bother.

I have gorgeous indie bookstores in my area (as I said, the Pacific Northwest fairly teems with indie shops, many of which are as awe-inspiring as that movie one above). I follow gorgeous indie stores from around the country on Twitter, and I drool over their photos. So if it is clearly possible to sell books in an organized, well-laid out, and actually beautiful fashion, what is the point of the stores that look like an earthquake has just happened?

I would argue that it’s laziness. In both of my local examples, they needn’t be such disasters. It’s just that instead of intelligently organizing the stores, they’ve decided to stuff as many books as possible onto the sales floor. It’s a weird disaster-shopping experience we only tolerate in some bookstores, some antique shops, and most garage sales. BLACK BOOKS: one of the best shows ever made, but not meant to be INSPIRATIONAL…

We wouldn’t put up with this sort of disastrous look in any other sort of business, and I would argue we don’t particularly put up with it in the bookshop business either. It hurts your customer base, because the people who are mostly going to Heap Bookshops are big readers who are as familiar with that type of store. Given a choice – and they have a choice – the casual shopper and the casual reader will prefer a clean, well-lit, organized store every time. Whether it’s Barnes & Noble, a gorgeous indie bookstore, or the well-ordered menus of Amazon.com. When most of the customer base leaves, these messy bookstores go out of business. Sometimes, they put a sign on their doors blaming Amazon.

It’s their own faults, and if I can be blunt…I’m not that sorry.

No, I don’t want bookstores to go out of business. I want them all to exist. I love bookstores more than almost anything else in the world and I would like every one of them to continue on happily ever after. But if it feels like you haven’t any interest in store, how it looks, and how people use it, then why should anyone else have any interest in it?

The fact is that these sorts of messy stores have existed for ages and thus, like so many things in the book world, it takes on the sacred connontation. It has existed, therefore must continue to exist without any changes or else doom and gloom befalls us all. People love the sight of the stacks, the feel of digging through them, the muffles cries of small unsuspecting children now lost beneath the papery dunes of Literary Biography: A – G…

Doubtless, these messy stores will continue to rise and fall and heap books anywhere they can. Me grouching about it won’t make any difference. All I can say for sure is, I’m all worn out by messes and I am spoiled with choice, both online and offline. Any romance there might be in messy heaps of books piled into an old daycare building are all gone for me, and I’ll not be shopping at them anymore. I’ll be sorry when they finally collapse and go out of business…but I’ll not be that sorry.

I’ll be busy in bookstores which come amazingly close to that idyllic Parisian bookstore, wandering their gorgeous well-organized shelves, petting their cat, and giving them all the money I can lay hands on.