Ngozi Ukazu’s Check Please! is a big deal. Seriously. The webcomic is currently raising funds for its second volume after the success of its first Kickstarter back in April 2015. The first volume raised $74,290 which was $59,290 over the original goal of $15,000.

Its sequel has smashed that. 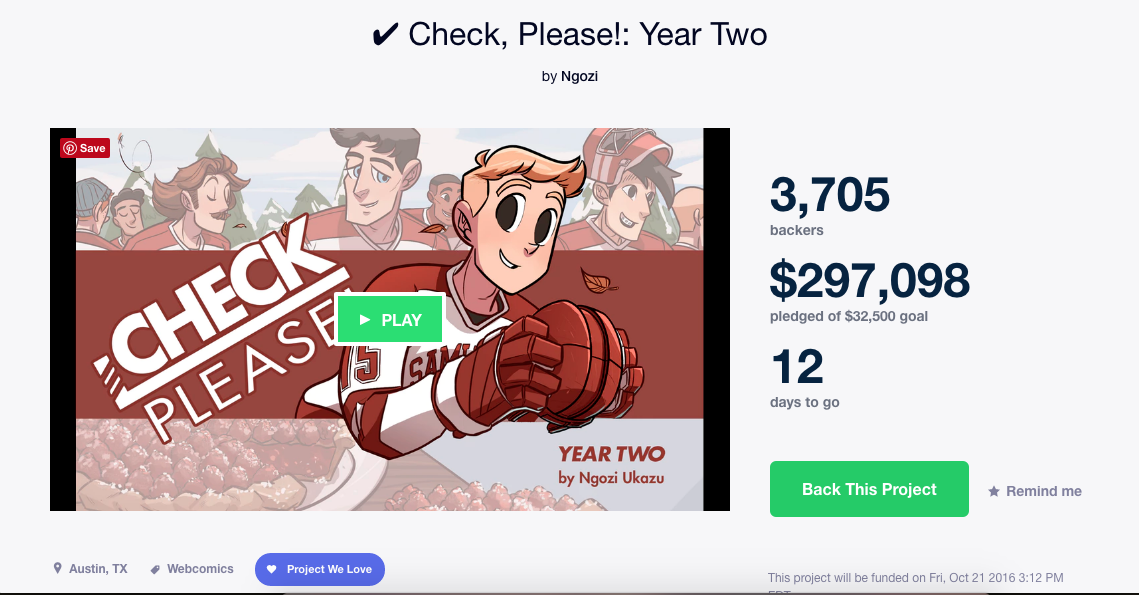 So what’s Check, Please? It’s a webcomic on Tumblr written, and drawn by Ngozi Ukazu about Eric “Bitty” Bittle. Bitty is a former figure skater, vlogger, and baking enthusiast who goes to Samwell University on a hockey scholarship. Year One chronicles his freshman year at Samwell as he gets to know his teammates, and deal with his fear of getting checked. It’s an endearing, and funny comic even if hockey isn’t something you’re into. Bitty gives us a lead who doesn’t fit into the stereotypical mold of a hockey player but it allows him to enrich the team’s dynamic. Nogzi also works to add layers to the hockey bros who you can’t help but fall in love with. The idea for the webcomic manifested during Ngozi’s screenwriting class as an undergrad at Yale; it originally was a screenplay with a darker tone about a stoic, and brooding hockey player. The comic is great and everyone should read it.

But the significance of the Check, Please! Year Two kickstarter isn’t just in how much money it raised in such a short time but the type of project it is to do that. Ngozi is a black woman who’s created a comic with a gay lead character. In a time where mainstream comic publishers are making excuses for why marginalized voices on, and off, the page don’t sell, you have this project smashing every single one of them. Black women as creators in the mainstream helming a project is rare (Nilah Magruder became the first black woman to write for Marvel with A Year Of Marvels: September Infinite Comic #1), and queer characters leading a solo title is like pulling teeth.

Even before this current Kickstarter, Check, Please! was living its best life. You can currently read a Spanish translated version online, and the only way to nab a physical copy if you weren’t a backer on Kickstarter was at conventions. In May 2016, Ngozi was tabling at the Toronto Comics Arts Festival (TCAF), and a line formed as soon as the doors opened on Saturday. Luckily, I got myself a copy of Check Please! Year One before she sold out on the Sunday afternoon.

It’s important for the industry how significant projects like a Check, Please! are when we’re discussing diversity. It’s not a buzzword. It’s asking for a reflection of reality, and people are proving that with their dollars.