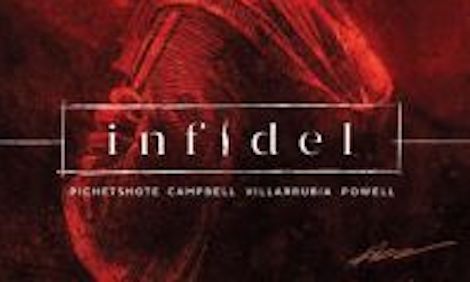 Ghosts and goblins and demons, oh my. ‘Tis the month for spoopy and spooky and terrifying, a last hurrah of delicious wickedness and wildness before those of us who live in the northern part of the country, and at a good many latitudes of the northern hemisphere, retreat inside and beneath fleece and wool for the winter.

There’s also the matter of the upcoming midterm elections which are equally, if not more, terrifying than the Halloween horror movie marathons (I just so as not to dissolve into tears or become rage incarnate).

The connection between the two? 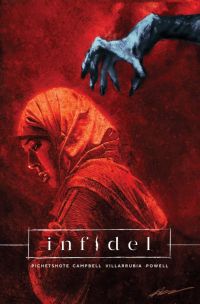 by Pornsak Pichetshote, Aaron Campbell, José Villarubia, and Jeff Powell, forward by Tananarive Due and afterward by Jeff Lemire.

Infidel, originally a five issue mini-series and released as a collected trade paperback on 9/26, is a haunted house story ready for your readerly eyeballs. Unlike other horror properties to date, however, with a few notable exceptions such as Jordan Peele’s Get Out, it focuses on characters of color, on immigrants, on the racism still viciously present not only in the system, but in horror as a genre and comics as a medium.

It is the story of Aisha, a Pakistani American Muslim woman engaged to a white man and the prejudice she faces from his mother and their neighbors and her best friend, Medina, who points out early on:

Racism’s a cancer that does’t get cured. The best you get is remission.

Aisha’s family and the rest of the cast live in a building that was damaged by a bomber who happened to be Muslim. Well, he’s the alleged bomber and the building’s residents all want the traumatic event boiled down to that simple story. They want a political and social Occam’s razor based on their own assumptions, a solution they don’t need to question, don’t need to confront.

The real story of the bombing isn’t what anyone expects but hate is easier than compassion, preconceived notions easier than educating one’s self, habit easier than change, so the majority of characters settle back into their comfortable, closed worlds and resolve never to examine the details, or the people with whom they share a living space, too closely, to question too loudly or openly.

It is their denial, their ignorance, their fear which establish conditions perfect for raising a monster. 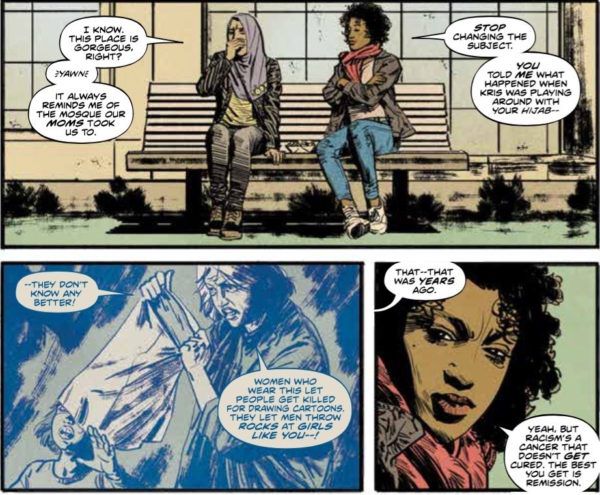 The creatures brought to life in the pages of Infidel are both figurative and literal. Claws and teeth and tentacles powered by deliberate ignorance, jealousy, and hatred. Born of individual’s inabilities to take believe they may actually have failed in their own rights, of their decisions to transfer blame to those who bear no responsibility.

That this monster takes possession of the white characters and targets the characters of color, that it is stalled, but ultimately not defeated, by a black woman who finds faith in the most unexpected of places, is no mistake. That the parable will make some readers uncomfortable is no mistake either.

Which is as it should be.

Because at its heart, Infidel is about the damage done to hearts and minds and souls when we forgo humanity in favor of easy, detestable assumptions. When we force others into boxes we establish. When we allow ourselves to remain ignorant, when we ignore truth, when we become complacent, letting the monsters in.

This one is fittingly graphic for the subject matter and most definitely for mature audiences. If you have issues with gore or blood or visuals portraying demons, it probably isn’t the book for you. But, if you can handle it, you should. Infidel will have you questioning everything, including our reality, including yourself.

Sometimes, something good comes of something terrifying. That’s incredibly important, especially right now. So challenge yourself. Question your assumptions.