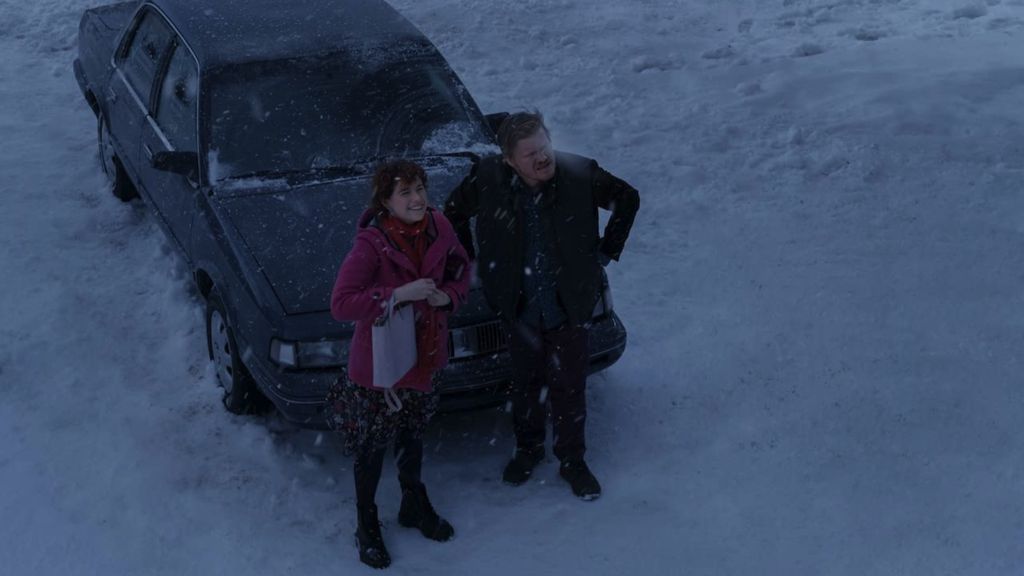 Every day I ponder life after college. I try to suppress these thoughts, but they sit in my wooden desk chair as I sleep and gawk at me as I wake up in the morning. Neighbors and middle aged adults I know constantly tell me and everyone like me that things will “work themselves out” and that “everything will be fine.” I’m Thinking of Ending Things shows us what happens when those words of affirmation never come to fruition.

Written by Ian Reid in 2016, I’m Thinking of Ending Things is a novel about a young couple, an unnamed narrator and her boyfriend, Jake, as they drive to meet Jake’s parents. Charlie Kaufman’s film adaptation of the thriller was released in October. Reid’s enthralling story and Kaufman’s surrealist tendencies coalesced into a film that explores human beings’ constant fears of aging and inadequacy; the film’s themes will be remembered for decades.

While the film is centered around the unnamed narrator and Jake’s car ride to his parent’s house, the main story is often interrupted with footage of a janitor. We see the janitor clean the local high school and sit in his supply closet as he watches films and eats. Scenes of his work life are consistently interspersed with the main character’s narration, in which she states, “I’m thinking of ending things” over and over again. When the frame quickly shifts from Jake’s perspective to the janitor’s, we get the feeling that there is an unspoken connection.

Regardless of what is happening, tension layers every scene. From the car ride to meeting Jake’s parents, there is an inescapable uneasiness the narrator cannot pin down. When the narrator and Jake stop to get ice cream, they run into the high schoolers that work there, and we cannot help but sense a sort of apprehension as Jake sees them laughing at him. It is a form of high school ostracization that everyone faces, but watching an adult fall victim to it turned the universal experience into something uncanny. As they are leaving, a young, odd girl working at the ice cream stop whispers to the narrator, “You don’t have to go forward in time.  You can stay here.”

On the drive back, Jake stops at the local high school to throw away trash, and he ends up disappearing, forcing the narrator to find him. This is where the janitor, Jake, and the narrator seemingly collide. This is where we see Kaufman employ themes from the musical Oklahoma!, in which he applies the dreamscape essence in a literal way by reenacting the musical’s dream ballet sequence. There are two Jakes in this sequence, playing both Jud and Laurey; in other words, he is both the charismatic lead character and the disarming loner. The Jud version of Jake kills Laurey, and everything suddenly comes together: we were not watching a girl meeting her boyfriend’s parents for the first time. We were watching a janitor, Jake’s thought process, before he killed the charming self he longed to be and his real, stunted self. Jake is trapped within his own surrealist state, dreaming of a life in which he had the confidence to ask a girl out and take her to his parents house. Instead, he is stuck within the confines of high school; there is no way out, and in Jake’s eyes, it is too late for a way out. And isn’t that everyone’s biggest fear? To be immobile, unable to progress through time?

Young people are constantly told “it gets better” without caveats, and perhaps we need more of those, considering our world and its ramifications. When we take into account our witnessing of wildfires and the deterioration of democracy, “it gets better” proves to be more and more of an empty promise we can barely hold onto.
Kaufman’s adaptation of I’m Thinking of Ending Things is topical, intelligent, and consistently restless. He employs humanity’s greatest fears in two hours without looking back, with the narrator stating, “We’re stationary and time passes through us, blowing like cold wind, stealing our heat, leaving us chapped and frozen.”