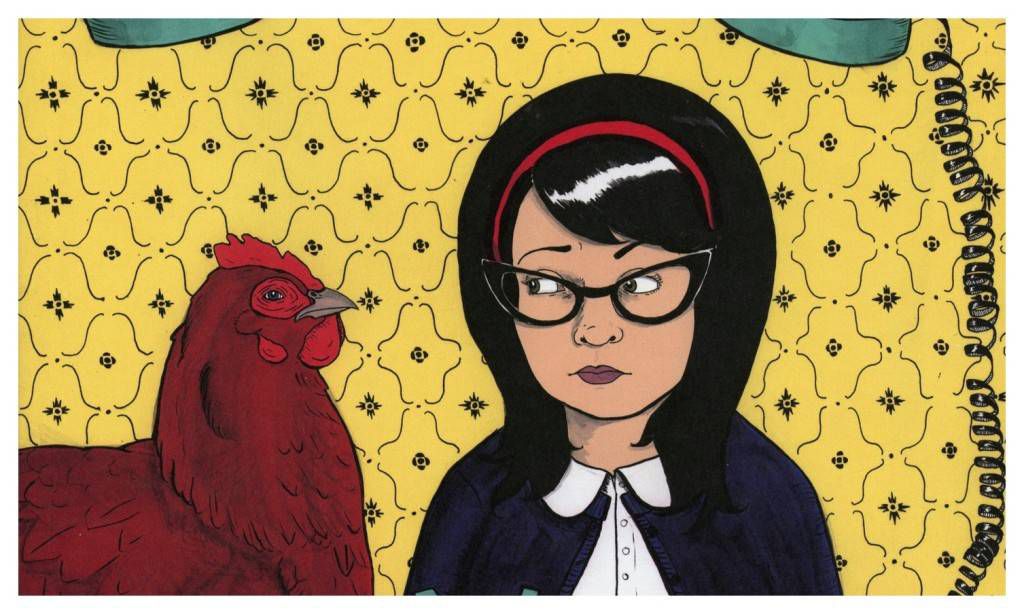 If sixteen consecutive months of preadolescent girls exhorting us to “Let It Go,” has taught the world anything, it should be this: keeping family secrets does not protect children. What it protects, generally, is adults’ sense of shame.

Nicole Georges uncovers the first clue to her mother’s secret on page 11 of the autobiographical Calling Dr. Laura: A Graphic Memoir, when a psychic tells her, “Maybe the man you think is your father is dead…but your real father is very much alive.”

It’s an engaging memoir of past and present. Visually, Georges delineates time by rendering the present with sophisticated graphic details and realistic, almost portentous shading. People and places are complicated. The past is represented in clean lines and pure black and white, without a hint of gray. Characters in the past appear childish and adorable with round, oversized heads and simplified facial features. The animals that Georges loves—dogs and chickens—appear warm and happy and simple. Unlike people, animals are not complex, and they never let her down.

Why would you call a right-wing conservative talk show therapist about a problem? You must be really messed up.

The gap between past and present is as vast as the gap between Georges’s reality and her mother’s lies. She’s long since given up on honestly relating to her mom, having developed the defense mechanism of falling asleep whenever conversations turn emotional. A splash page labeled “Anatomy of a Mom Fight,” illustrates a pattern of stonewalling and gaslighting. Her obsession with angry conservative talk show host Laura Schlessinger seems like both a desire for straight talk as well as a longing for simple fantasy solutions to complex real world problem.

Georges originally suspects that her older sister is her real mother, but she’s so averse to confrontation that it takes her over 130 pages to ask. Her sister tells another story: her biological father was a career criminal. Their mother left him to protect the girls, admonishing her then-teenage sisters to “tell her he died” of a random deadly condition: “I don’t know…colon cancer.”

It no coincidence, the reader suspects, that when baby Nicole grows into elementary Nicole, she suffers from colon-related ailments: constant stomach pains and encopresis. Her mother’s shame and lies are made manifest in the little girl, who then develops her own sense of shame and lies to cover up a personal sense of disgust.

Georges desperately seeks approval. Although she’s a hip-looking vegan lesbian in Portland, Oregon, she has difficulty interesting women in monogamy, and when she falls into commitment, she’s always the one compromising. Her adult relationship with her mother follows the same pattern. She’s afraid to come out of the closet, knowing exactly how her mom will respond. Only when Georges realizes she can choose to accept her mom “as she was—a 60 year old woman with an enormous capacity to love in the present, but never reconcile the past,” can she stop seeking her approval.

It takes years of her life, and the experience of working on Calling Dr. Laura, before Georges pursues the final piece of the puzzle and reaches out to her father. What she discovers, of course, are more lies and more loss. Her mother may have thought she was protecting her children by hiding her mistakes, but in the end Georges sees through her mother’s selfishness. The falsehoods meant to keep her safe have done nothing but carve out a hollow space inside her, fill it with shame, and keep her from a happier truth.

Parents: are you ashamed of yourselves? Do you think you can protect your kids with lies? Are you paralyzed by the thought of how others might perceive your failings? Take a note from Calling Dr. Laura and Queen Elsa: let it go. There’s no truth so terrible that it can hurt a kid more than the knowledge that their parents have hidden that truth from them for decades.