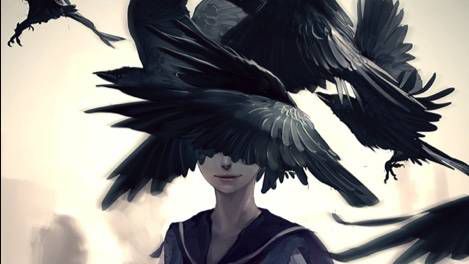 The Raven is certainly Edgar Allan Poe’s most famous work, and perhaps part of the reason lies in how often it’s been illustrated by awesome artists. From its publication in 1845 to the 21st century, artists have captured and reinterpreted the poem in different styles in their illustrations for The Raven: from modern to romantic, surreal to macabre, each puts their own spin on the story, adding new meaning and intonation. Looking at the range of interpretations underscores just how influential and important The Raven is as a piece of poetry. 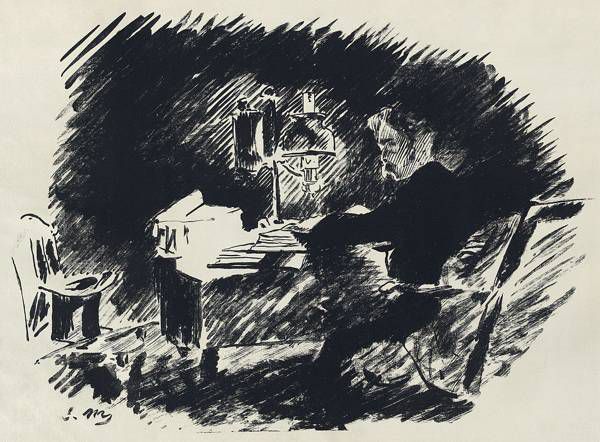 “Deep into that darkness peering, long I stood there wondering, fearing,” The Raven, Edouard Manet, 1875.

One of the first notable artists to tackle illustrations for The Raven was Edouard Manet, 19th-century flâneur, best frenemies with Degas, and modern painter infamous for such works as Le Déjeuner sur l’Herbe and Olympia. Manet was buds with Stéphane Mallarmé and provided four illustrations for Mallarmé’s 1875 translation of The Raven. Manet was admittedly an odd choice. His illustrations are stark, lacking in any sense of sentiment or narrative. They are, in other words, very Manet-esque, and not at all what readers today might expect from The Raven.

In fact, when Gabriel Rossetti, member of the Pre-Raphaelite Brotherhood and inexplicably attractive ladies’ man, got his hands on a copy of Mallarmé and Manet’s The Raven, he hated it. He wrote to Jane Morris, “Manet… certainly must be the greatest and most conceited ass who ever lived. A copy should be bought for every hypochondriacal ward in lunatic asylums. To view it without a guffaw is impossible.” 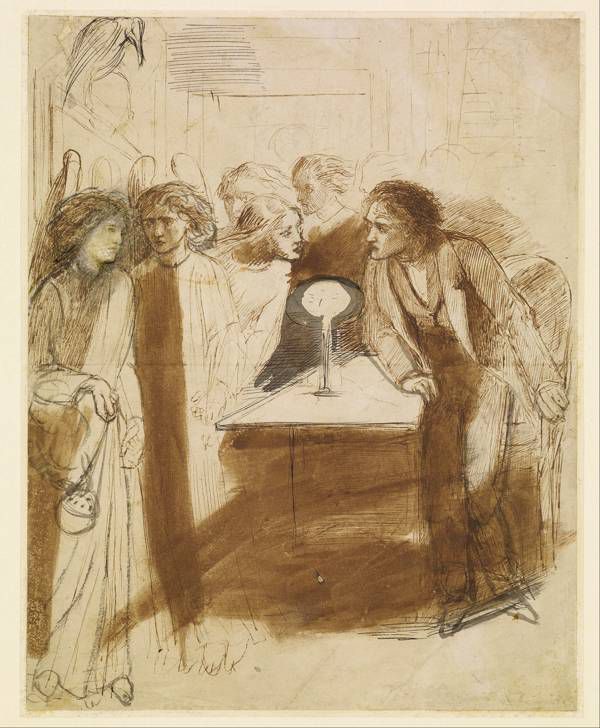 Although Rossetti never officially made illustrations for The Raven, he did sketch scenes from it multiple times. His favorite line appeared to be, “Swung by Seraphim whose foot-falls tinkled on the tufted floor.” Nearly all Rossetti’s sketches for The Raven show angels marching past the narrator as his ornithological nemesis perches atop a bust. It’s no surprise Rossetti was so attracted to the poem: after all, he and many of his PRB brethren built entire careers on portraying tragically romantic, beautiful women like the lost Lenore, apparently agreeing with Poe’s idea that, “the death then of a beautiful woman is unquestionably the most poetical topic in the world.” 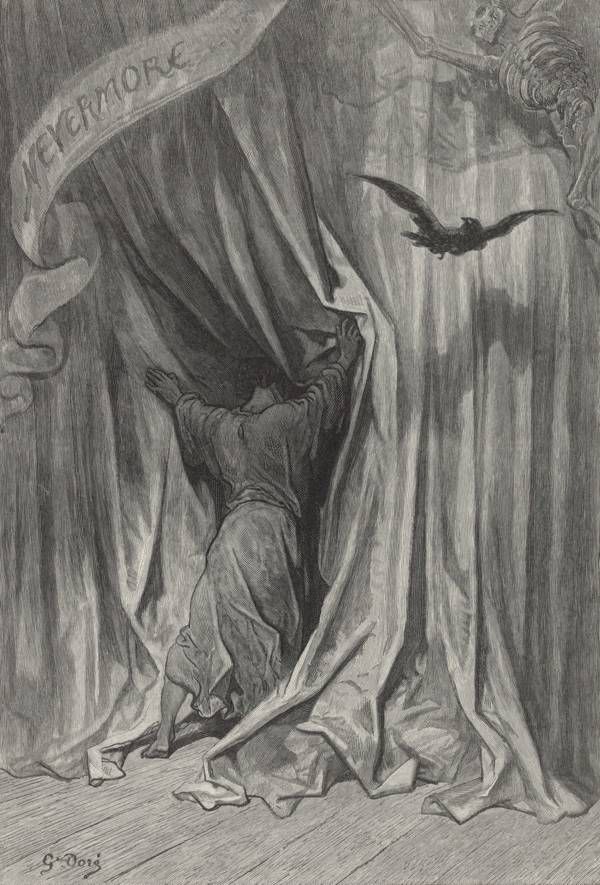 Far more well-known than either Manet or Rossetti’s illustrations for The Raven are those of Gustave Doré. A symbolist, Doré’s vision of The Raven combined the romanticism of Rossetti with the surreal spiritualism typical of his work. Doré’s illustrations appeared in a lavish, 1883 oversized special folio edition, and number among the poem’s most famous images.

For the US publication of the special folio edition of The Raven, Harper & Brothers announced a competition to illustrate it. This was nothing but a publicity stunt–Doré, one of the most famous artists of the time, was already on board as the illustrator. But a Liverpool artist named James Carling, who happened to be in Chicago that year, decided to enter with a collection of painted illustrations that rival Doré’s. Sadly, he died before they could be published. 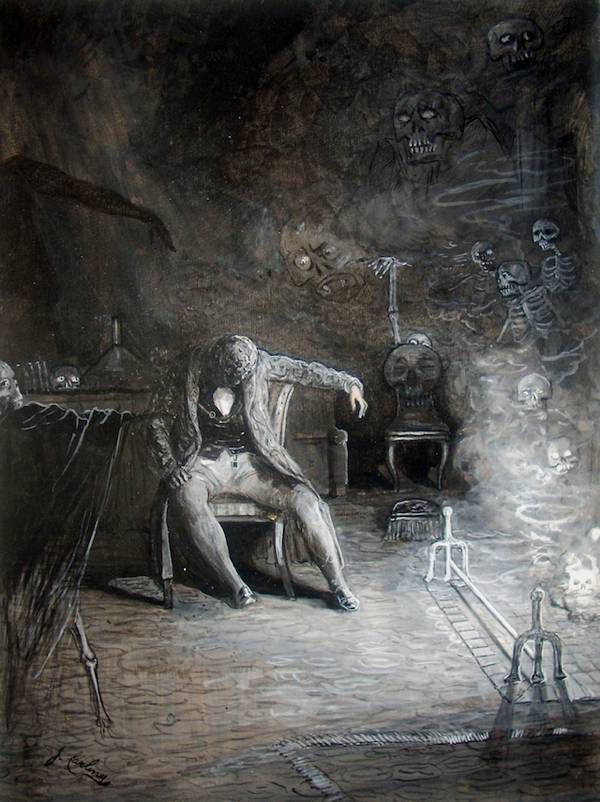 “And each separate dying ember wrought its ghost upon the floor,” The Raven, James Carling, 1883-87. Edgar Allan Poe Museum.

Poe was Carling’s favorite writer, and his images channel Poe’s belief that, “The scariest monsters are the ones that lurk within our souls.” They’re macabre and dream-like, turning the narrator’s psyche, rather than the raven, into the central horror of the work. When comparing his own vision of The Raven to that of Doré, Carling said,

Doré’s are beautiful; there is a tranquil loveliness in them unusual to Doré. Mine are stormier, wilder and more weird; they are horrible; I have reproduced mentality and phantasm. Not one of the ideas were ever drawn before… for I have followed [Poe’s] meaning so close as to be merged into his individuality.

Many other artists have taken their hand to illustrating The Raven since then, including early 20th-century illustrator Edmund Dulac and anamorphicist István Orosz. 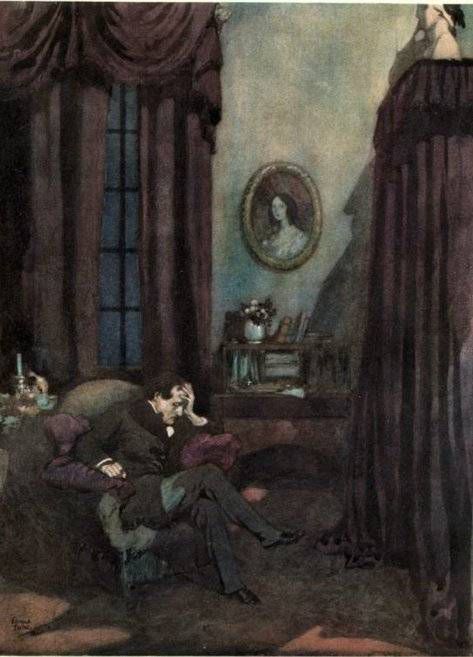 One of the most interesting post-War interpretations is by Italian graphic artist Lorenzo Mattotti, for Lou Reed’s reinterpretation of the poem. Reed described his vision of The Raven as “meant to be heard in the mind.” Even though Mattotti’s background is in comics, his images for The Raven are anything but cartoonish–they’re dark, powerful, with an underlying hint of terror and eroticism introduced by Reed.

With all the excellent illustrations for The Raven to choose from, what would the ultimate illustrated edition of The Raven look like? Perhaps something like this… 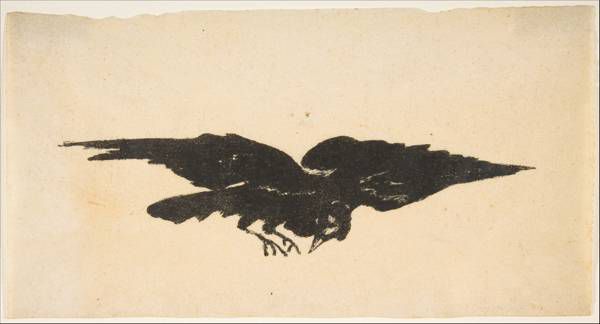 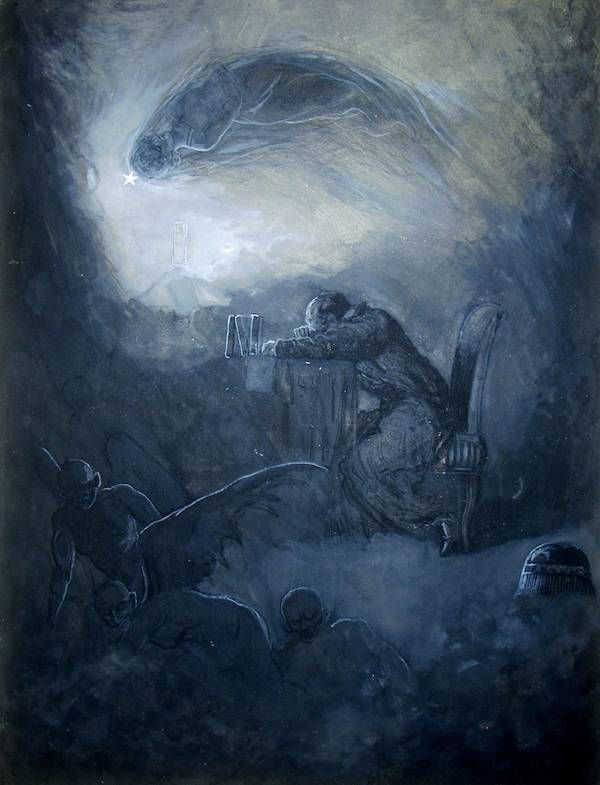 Once upon a midnight dreary, while I pondered, weak and weary,
Over many a quaint and curious volume of forgotten lore—
While I nodded, nearly napping, suddenly there came a tapping,
As of some one gently rapping, rapping at my chamber door.
“’Tis some visitor,” I muttered, “tapping at my chamber door—
Only this and nothing more.” 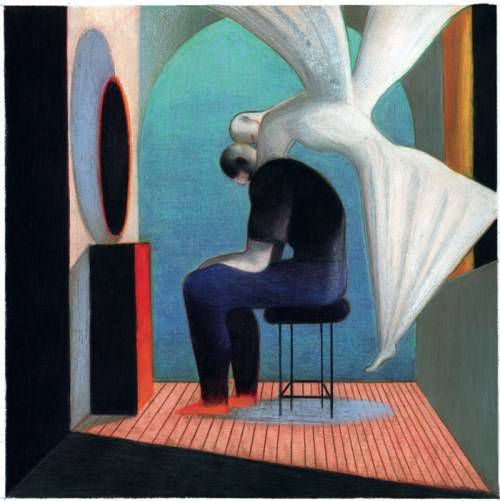 Ah, distinctly I remember it was in the bleak December;
And each separate dying ember wrought its ghost upon the floor.
Eagerly I wished the morrow;—vainly I had sought to borrow
From my books surcease of sorrow—sorrow for the lost Lenore—
For the rare and radiant maiden whom the angels name Lenore—
Nameless here for evermore. 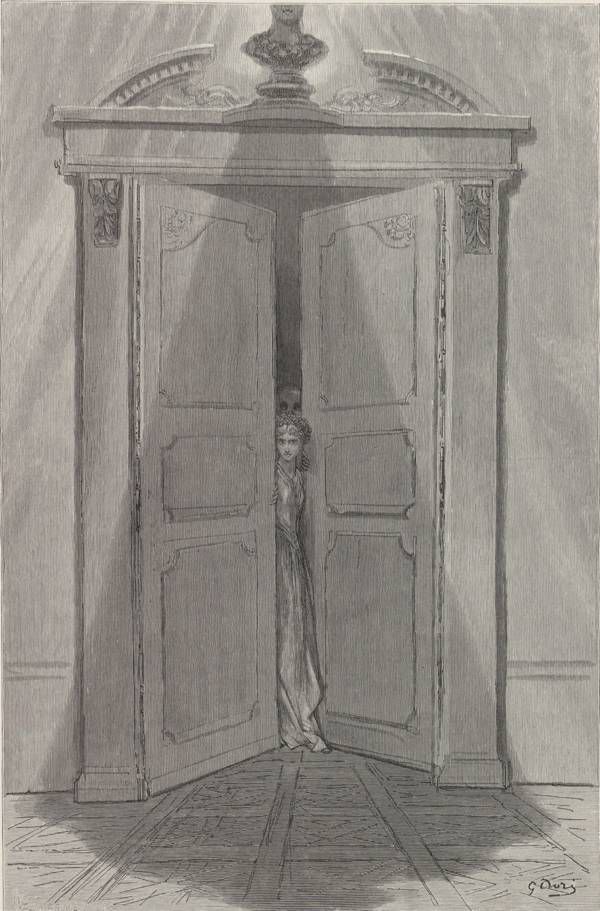 “Entreating entrance at my chamber door,” The Raven, Doré, 1883. 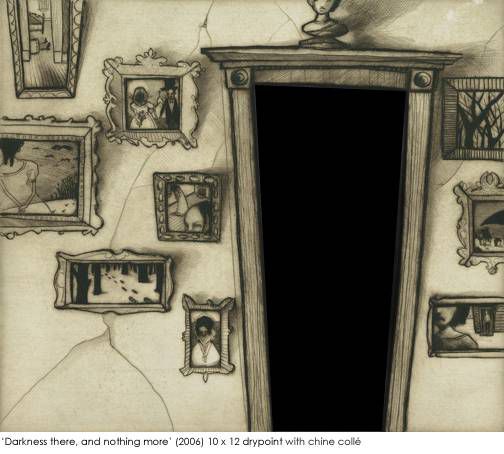 Presently my soul grew stronger; hesitating then no longer,
“Sir,” said I, “or Madam, truly your forgiveness I implore;
But the fact is I was napping, and so gently you came rapping,
And so faintly you came tapping, tapping at my chamber door,
That I scarce was sure I heard you”—here I opened wide the door;—
Darkness there and nothing more. 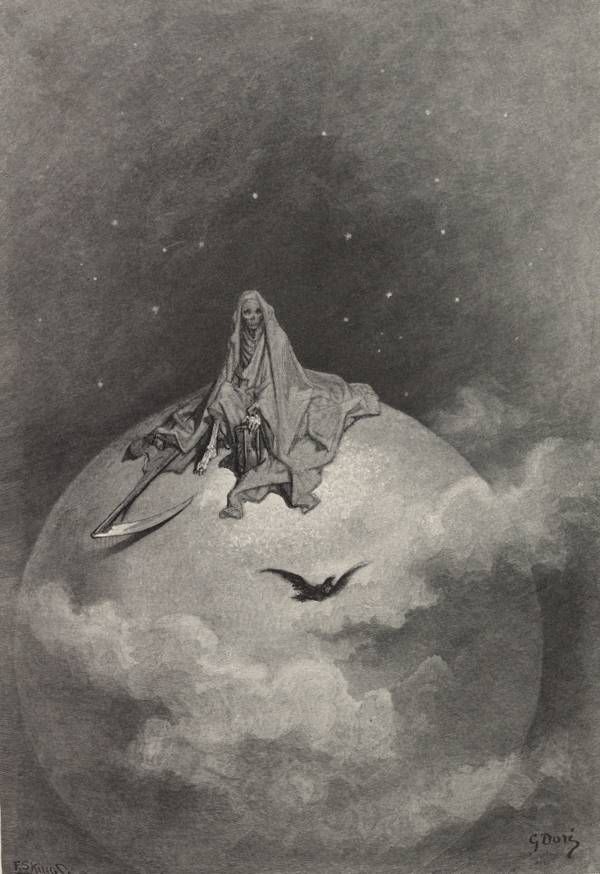 “Dreaming dreams no mortal ever dared to dream before,” The Raven, Doré, 1883.

Deep into that darkness peering, long I stood there wondering, fearing,
Doubting, dreaming dreams no mortal ever dared to dream before;
But the silence was unbroken, and the stillness gave no token,
And the only word there spoken was the whispered word, “Lenore?”
This I whispered, and an echo murmured back the word, “Lenore!”—
Merely this and nothing more. 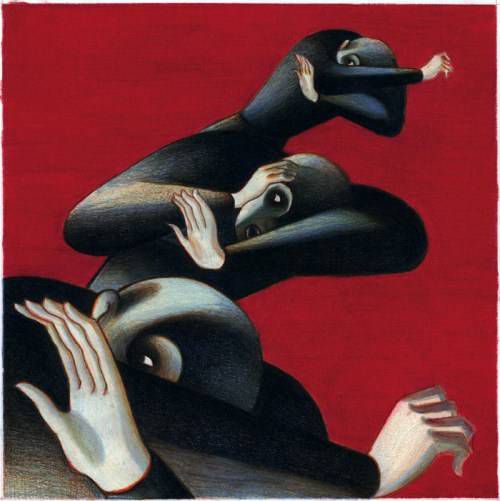 “Soon again I heard the tapping somewhat louder than before,” Lou Reed’s The Raven, Lorenzo Mattotti, 2003.

Back into the chamber turning, all my soul within me burning,
Soon again I heard a tapping somewhat louder than before.
“Surely,” said I, “surely that is something at my window lattice;
Let me see, then, what thereat is, and this mystery explore—
Let my heart be still a moment and this mystery explore;—
’Tis the wind and nothing more!” 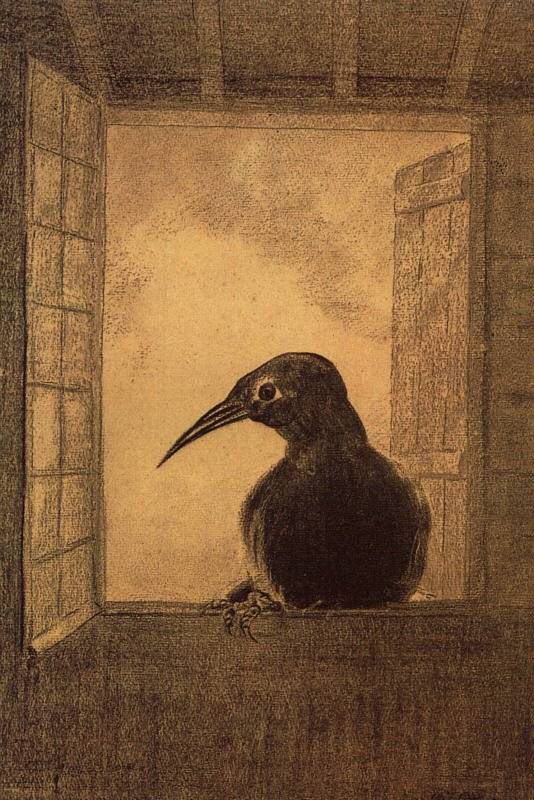 Open here I flung the shutter, when, with many a flirt and flutter,
In there stepped a stately Raven of the saintly days of yore;
Not the least obeisance made he; not a minute stopped or stayed he;
But, with mien of lord or lady, perched above my chamber door—
Perched upon a bust of Pallas just above my chamber door—
Perched, and sat, and nothing more. 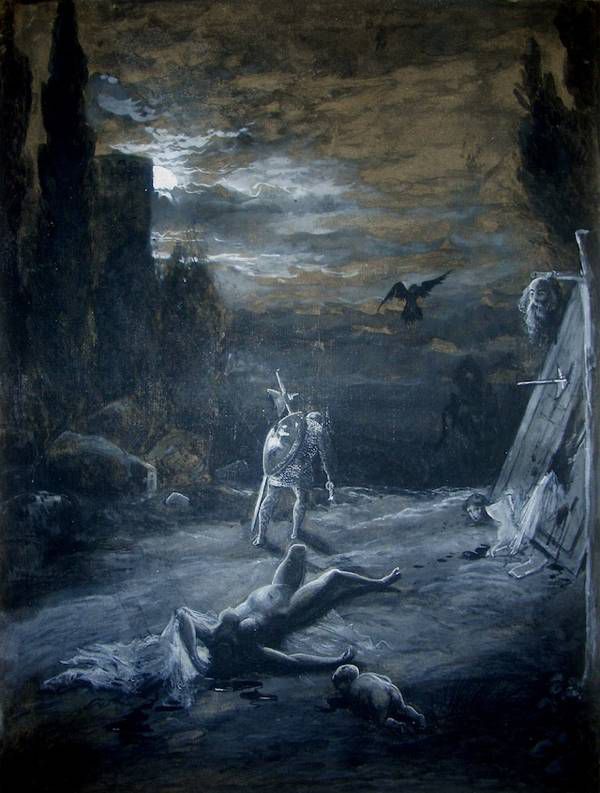 Then this ebony bird beguiling my sad fancy into smiling,
By the grave and stern decorum of the countenance it wore,
“Though thy crest be shorn and shaven, thou,” I said, “art sure no craven,
Ghastly grim and ancient Raven wandering from the Nightly shore—
Tell me what thy lordly name is on the Night’s Plutonian shore!”
Quoth the Raven “Nevermore.” 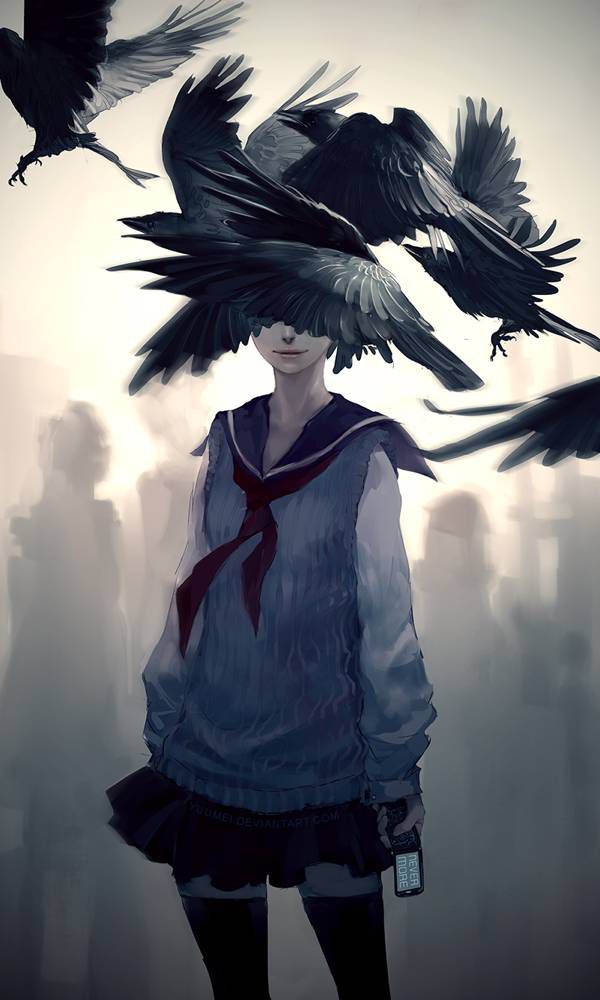 Much I marvelled this ungainly fowl to hear discourse so plainly,
Though its answer little meaning—little relevancy bore;
For we cannot help agreeing that no living human being
Ever yet was blessed with seeing bird above his chamber door—
Bird or beast upon the sculptured bust above his chamber door,
With such name as “Nevermore.” 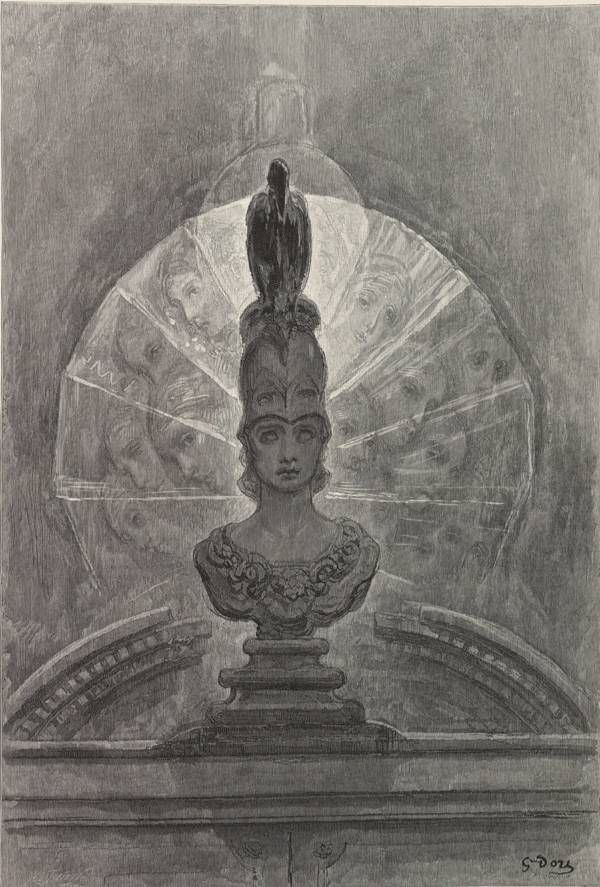 But the Raven, sitting lonely on the placid bust, spoke only
That one word, as if his soul in that one word he did outpour.
Nothing farther then he uttered—not a feather then he fluttered—
Till I scarcely more than muttered “Other friends have flown before—
On the morrow he will leave me, as my Hopes have flown before.”
Then the bird said “Nevermore.” 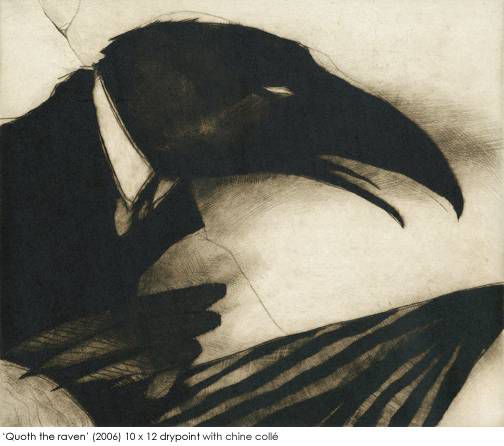 Startled at the stillness broken by reply so aptly spoken,
“Doubtless,” said I, “what it utters is its only stock and store
Caught from some unhappy master whom unmerciful Disaster
Followed fast and followed faster till his songs one burden bore—
Till the dirges of his Hope that melancholy burden bore
Of ‘Never—nevermore’.” 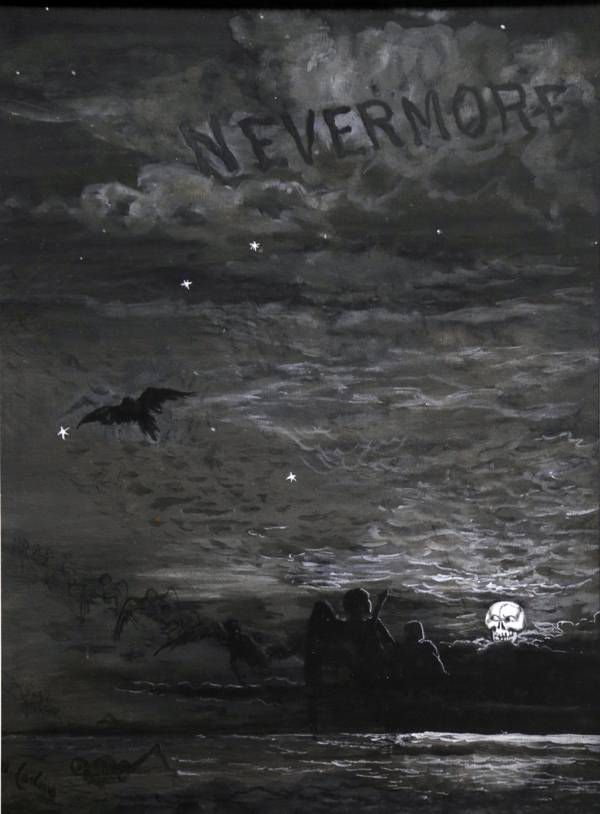 But the Raven still beguiling all my fancy into smiling,
Straight I wheeled a cushioned seat in front of bird, and bust and door;
Then, upon the velvet sinking, I betook myself to linking
Fancy unto fancy, thinking what this ominous bird of yore—
What this grim, ungainly, ghastly, gaunt, and ominous bird of yore
Meant in croaking “Nevermore.” 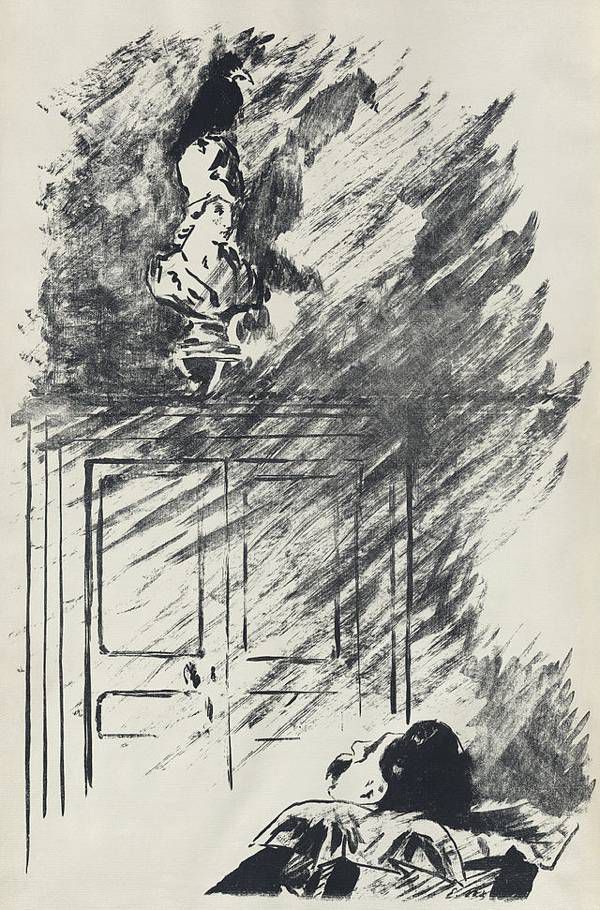 This I sat engaged in guessing, but no syllable expressing
To the fowl whose fiery eyes now burned into my bosom’s core;
This and more I sat divining, with my head at ease reclining
On the cushion’s velvet lining that the lamp-light gloated o’er,
But whose velvet-violet lining with the lamp-light gloating o’er,
She shall press, ah, nevermore! 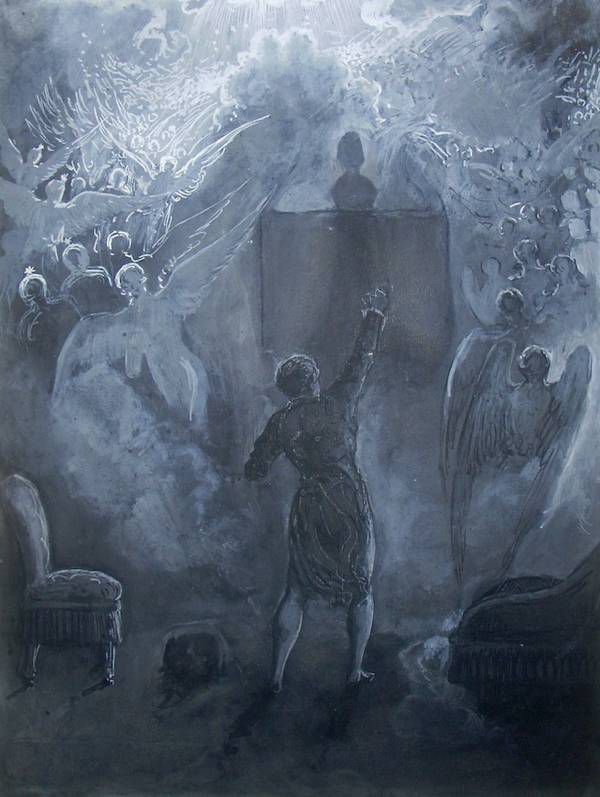 Then, methought, the air grew denser, perfumed from an unseen censer
Swung by Seraphim whose foot-falls tinkled on the tufted floor.
“Wretch,” I cried, “thy God hath lent thee—by these angels he hath sent thee
Respite—respite and nepenthe from thy memories of Lenore;
Quaff, oh quaff this kind nepenthe and forget this lost Lenore!”
Quoth the Raven “Nevermore.” 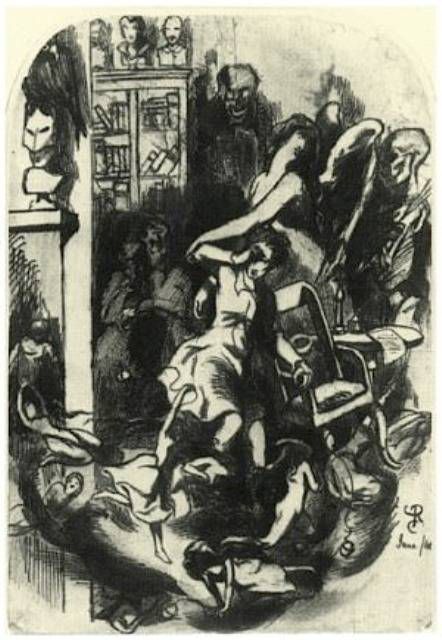 “Prophet!” said I, “thing of evil!—prophet still, if bird or devil!—
Whether Tempter sent, or whether tempest tossed thee here ashore,
Desolate yet all undaunted, on this desert land enchanted—
On this home by Horror haunted—tell me truly, I implore—
Is there—is there balm in Gilead?—tell me—tell me, I implore!”
Quoth the Raven “Nevermore.” 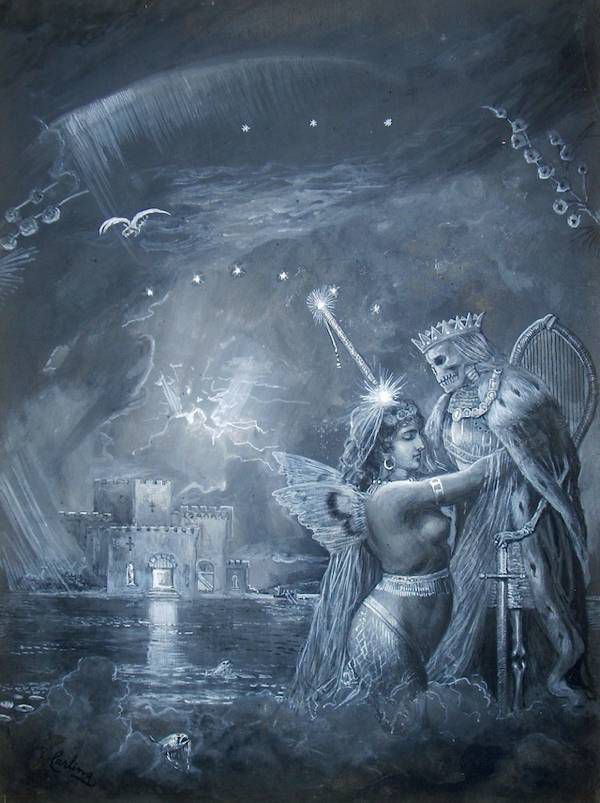 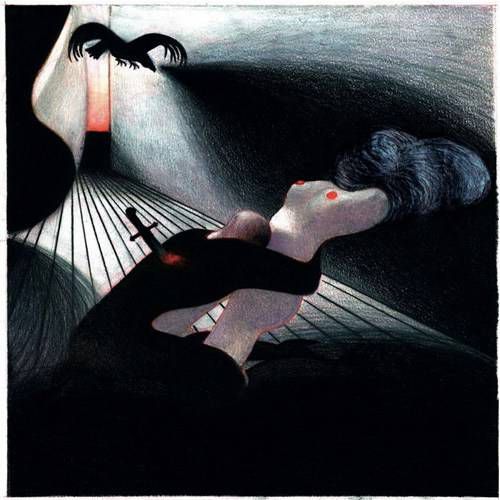 “Be that word our sign of parting, bird or fiend,” Lou Reed’s The Raven, Lorenzo Mattotti, 2003.

“Be that word our sign of parting, bird or fiend!” I shrieked, upstarting—
“Get thee back into the tempest and the Night’s Plutonian shore!
Leave no black plume as a token of that lie thy soul hath spoken!
Leave my loneliness unbroken!—quit the bust above my door!
Take thy beak from out my heart, and take thy form from off my door!”
Quoth the Raven “Nevermore.” 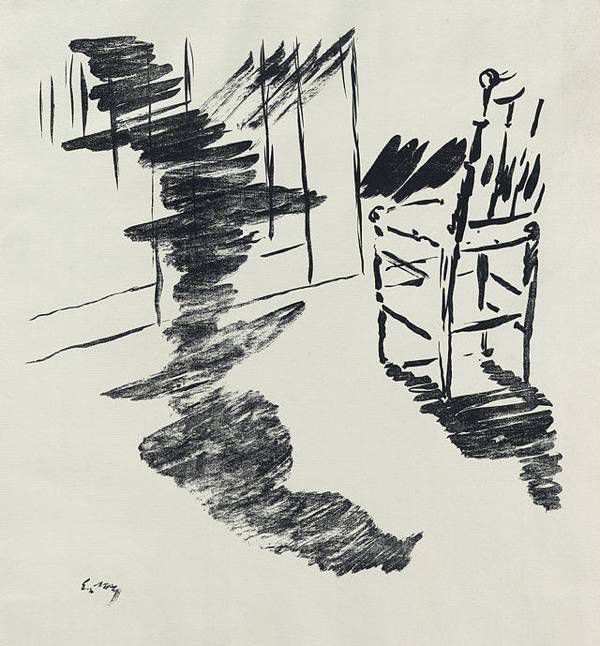 “And my soul from out that shadow that lies floating on the floor,” The Raven, Manet, 1875.

And the Raven, never flitting, still is sitting, still is sitting
On the pallid bust of Pallas just above my chamber door;
And his eyes have all the seeming of a demon’s that is dreaming,
And the lamp-light o’er him streaming throws his shadow on the floor;
And my soul from out that shadow that lies floating on the floor
Shall be lifted—nevermore! 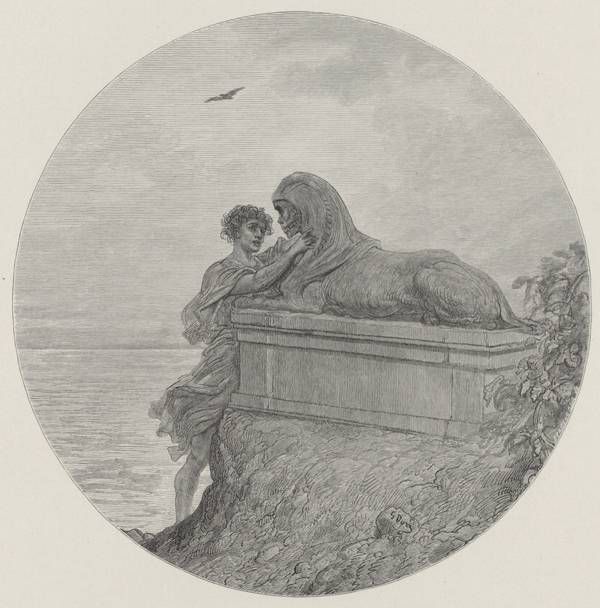