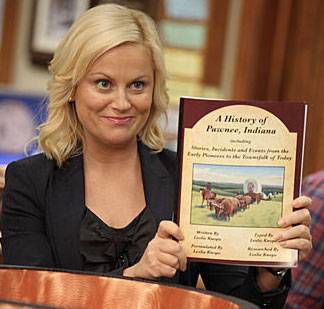 We’ve already enjoyed the curmudgeonly book blurbs of Parks and Recreation’s Ron Swanson– now let’s hear from Leslie Knope, resident optimist and all-around-endearingly-sincere local politician. Here are a few samples of what would happen if Leslie Knope blurbed books (taken from her actual lines, of course).


“I would like to be president someday, so no, I’ve not smoked marijuana. I ate a brownie once at a party in college. It was intense. It was kind of indescribable, actually. I felt like I was floating. Turns out there wasn’t any pot in the brownie. It was just an insanely good brownie.”

THE CATCHER IN THE RYE
“The sun roof was open, the music was high. And this girl’s hand was steadily moving up my thigh. She had opened up three buttons on her shirt so far. I guess that’s why I didn’t notice that police car. I can’t believe it, I just made a mistake. Well, parents are the same no matter time nor place. So to you all the kids all across the land. Take it from me, parents just don’t understand.”

THE TAMING OF THE SHREW

Book Deals Newsletter
Sign up for our Book Deals newsletter and get up to 80% off books you actually want to read.
Thank you for signing up! Keep an eye on your inbox.
By signing up you agree to our terms of use
“I’m a feminist, okay?…I’ve gone on record that if I had to have a stripper’s name, it would be Equality. But I’m willing to sacrifice all that I’ve worked for just to put a smile on your perfect little face. So don’t blow this.”

TWILIGHT
“Ron Swanson: Leslie, what do we do when we get this angry?
Leslie Knope: We count backwards from 1,000 by sevens, and we think of warm brownies.
Ron Swanson: Go do that in your office.”

When she heard that Zadie Smith also wanted other famous women to blurb her new book, NW:


“No one is more upset about this than I am. Not like it’s a competition or anything. ‘Cause if it was, I would win, but that’s neither here nor there. The point is I would win.”

THE HUNGER GAMES
“Every great work of art contains a message, and the message of this… is, “Get out of my way unless you want an arrow in your ass.””

When a debut author offers her money to write several fake positive reviews of the book on Amazon:
“Everybody knows that we cannot accept gifts for over $25 for corruption reasons. We live in a fish bowl. Everyone is watching us. That’s why I go two towns over if I want to rent a movie with nudity in it.”

GOING ROGUE by Sarah Palin
“Ben: Why are you laughing?
Leslie: Because my dream is dead.”

THE BELL JAR
“My official statement is that is, overall, a bummer.”

The first draft of THE TIME TRAVELER’S WIFE
“”The Time Travelers Optometrist” by Pawnee’s own Penelope Foster. A heart-warming story about a caveman eye doctor who travels to present day Cincinnati and can see everything but love. Unreadable.”

SWAMPLANDIA!
“That’s the style now Ron. It’s called Lollipopping. All the kids are doing it.”

BEAUTIFUL RUINS
“All the things make me think a lot of feelings about myself.”

THE KILLER ANGELS
“One time I fell madly in love with a civil war re-enactor that I had only known for six hours. And then I found out he wore the clothes all the time… and he was married. But the clothes thing really bothered me.”

Upon DNFing FINNEGAN’S WAKE:
“I doth proclaim to be a stupid fart face.”

The newest TWILIGHT fanfiction erotica:
“Leslie: See there’s more things to look at on the internet other than naked guys Ann.
Ann: What?”

THE POWER OF POSITIVE THINKING
“One time when I was in high school a guy’s mom called me and broke up with me for him. There was another time when I was on a date and I tripped and broke my kneecap, and then the guy said he wasn’t feeling it, so he left and I waited for an ambulance. One time I was dating this guy for awhile, and then he got down on one knee and he begged me to never call him again. One guy broke up with me while we were in the shower together. Skywriting isn’t always positive. Another time a guy invited me to a beautiful picnic with wine and flowers. And then when I tried to sit down, he said, “Don’t eat anything. Rebecca’s coming.” And then he broke up with me.”

The new Dan Brown
“He’s not going to be able to keep anything from me. In high school they used to call me Angela Lansbery… but that was because of my hair cut.”

DAVID COPPERFIELD
“I know you’re probably thinking, “There’s that crazy gate lady from outside back again.” And to some extent, you’re right. I am the gate lady. But the only thing I’m crazy about is leaving the past behind.”

LEFT BEHIND
“My nana, she used to say the best stuff. No working yourself into a lather. Look where it is and you’ll find it. Don’t put me in a home. Tell the truth and shame the devil. The devil knows where you’re hiding. If you take enough rides with the devil pretty soon he’s going to drive. She was really into the devil.”

The new Philippa Gregory
“History is important. You just can’t go around changing everything all the time. Or else next thing you know they’ll be painting the White House not white. I’m so angry I can’t think of another color. [pause] Green.”

THE NIGHT CIRCUS
“It’s the most romantic story ever. It makes The Notebook look like Saw V.”

THE OBAMAS by Jodi Kantor
“It’s gotten a lot harder to work in government. You think Winston Churchill ever had to pull his pants down and show his butt? No. But would he have? Yes. Now could he have? Well maybe not towards the end of his life. But, he would have. Because he loved his job.”