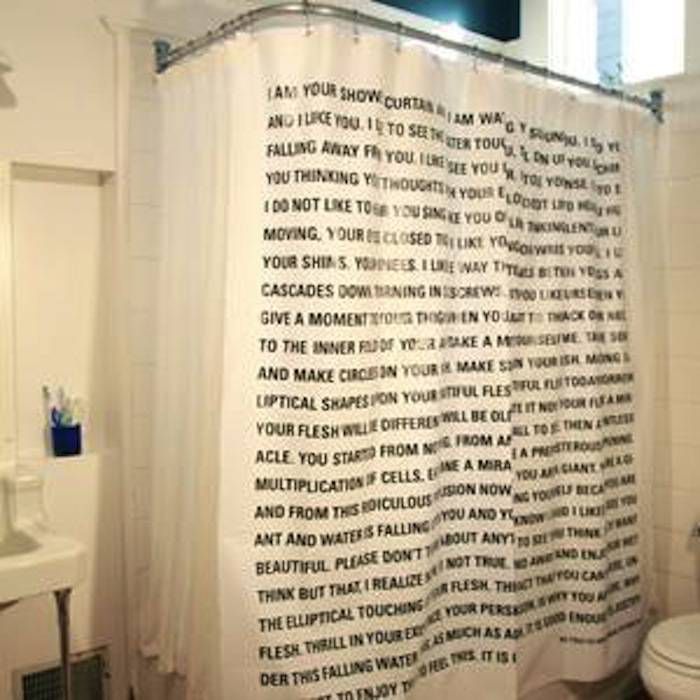 Ever wondered what your shower would say to you? Dave Eggers has. The McSweeney’s founder and literary impresario’s latest work has taken him inside the vinyl mind of the average shower curtain.

Eggers has written a monologue from the curtain’s perspective, addressing the bather, and printed it on one, which, when you think about it, is an act of self-defacing, like an author tattooing their diary entry on themselves.

The short story is for The Thing, the literary and art quarterly which splices together writers and designers for one-off projects. Aside from whether the supply of Eggers’ curtain will match the demand from hipster showers, this project raises an important question.

When did we lower the sights of our anthropomorphising ray gun and start zapping household appliances?

Maybe it’s a sign of age. As kids we dream of animals speaking, forests laughing, mountains singing. The closest this impulse got to being domesticated was in believing our toys came alive at night. Maybe mortgage repayments do funny things to the imagination.

I actually think the shower curtain idea is rather great. But then again, I have a mortgage.

But Eggers’ exploits have stirred the inner Mary Poppins, someone who took great pleasure in breathing life into mundane accoutrements. What writers could best bring to life other parts of the bathroom or home? Who could articulate the deepest parts of the toilet’s soul? Who best understands the hopes, dreams and fears of the scales? Who can regale the quixotic adventures of the soap?

Here are some suggestions:

Toilet – Charles Bukowski:  Who better to chart the vicissitudes of the porcelain throne than someone whose characters spent most of their time hugging it?

Scales – Helen Fielding: In Bridget Jones’s Diary we heard a lot about the heroine’s furtive glances at the tumbling numbers of doom. But if it had words, not digits, to offer, what advice would it offer?

Soap – Chuck Palahniuk: A writer who somehow made soap, that most bland of personal hygiene products, exciting and not a little bit gross. The Imperial Leather biography awaits to be written.

Edd McCracken lives in Scotland, works for an ancient university, and writes about culture for fun. Follow him on Twitter:  @EddMcCracken