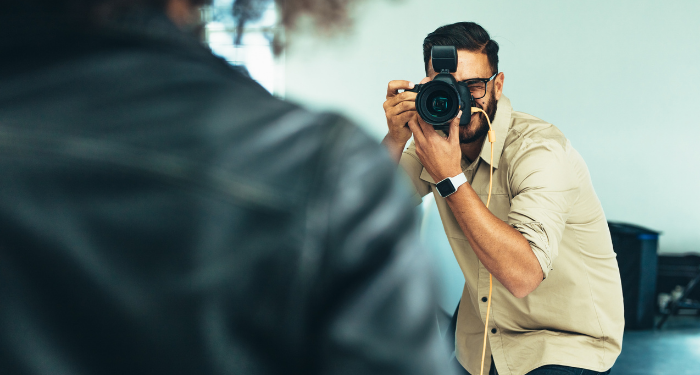 Author photos are tricky. Readers will make a conscious or unconscious judgement of the author from them; but how much can you convey with one image? Do you want to look like yourself as you would appear walking down the street on a Sunday morning before coffee or do you want to appear like a version of yourself that’s been run through 45 image-enhancing filters? (No judgment!) Do you want to be DOING something in the photo so the reader feels they know you a little bit — reading, walking on the beach, cleaning your bathroom? Do you want to hold something? Smile or smirk? There is only so much you can say with one photo, and is it better to make a statement or let your book do the talking? Many authors choose the “safe” traditional headshot route, but others dare to step outside the box. There is no right or wrong answer, but there are photos that the reader skims over and then there are shots that appear in our brains before we remember the book cover. These are the images that have reached icon status.

Below, 15 iconic author photos that speak volumes with one image.

Roxane Gay’s head-in-hands author photo is iconic. She goes with a completely nontraditional pose and the personality this photo is able to convey is why I’ve included it on this list. She is managing to both smile and roll her eyes (but in a friendly way??) in one photo. Not only is that simply impressive, but this photo makes you want to read more, and also probably become this person’s best friend.

If Roxane Gay’s photo is an impressive feat of friendly eye rolling, this book jacket photo of a young Stephen King is a downright iconic example of eyebrows giving us EVERYTHING.

Eric Carle’s author photo for The Nonsense Show is somewhat nonsensical — but in, like, a good way? The visual playfulness and originality here totally lives up to his legacy as a one-of-a-kind.

The late poet Lucie Brock-Broido knew how to take a compelling photo and this one, featuring her cascading blonde hair in all of its glory, more than earns her a spot on this list. Yes, some authors choose to pose on thrones. Brock-Broido makes her own throne out of her hair.

Xiran Jay Zhao tweeted in 2013 that if they ever got published, they would take their author photo in a cow suit. Earlier this year, they were able to make good on their promise and take this now-iconic cow suit author photo.

It is no surprise that Oscar Wilde’s author photo matches his charismatic reputation. His photo exudes casual, even bored, extravagance — an iconic visual legacy.

Rabih Alameddine is himself an artist, so it makes sense that he is also the uncrowned king of author photos. This recent photo is an iconic blend of visually inspired and playful.

What else would we expect from a renowned comic genius? Amy Poehler’s sailor-inspired photo for Yes Please is hilarious and makes us want to say “ahoy matey!” to her book. If you picked this book up and turned it over, would you have any doubt that it was going to make you laugh?

R.O. Kwon’s black and white author photo, featuring her signature eye makeup, is nothing short of piercing. As soon as you see it, you can’t unsee it and it can’t unsee you, kind of like those pictures with the eyes that follow you around the room. The photo is even more iconic when you read this article from The Cut, in which Kwon talks about how and why her black eye shadow became her signature — a lesson in fierceness.

If Rabih Alameddine is the uncrowned king of iconic author photos, Anne Rice may be the queen. There are several photos of Anne Rice that I could include here, and it came down to this choice: skull or doll? I went with the more classic skull. Anne Rice, who just passed away in December, was one of a kind and she will be remembered, among a million other things, for her iconic author photos.

In fairness re: Jim Shepard’s dogs, I give you Haruki Murakami’s cat. Twitter is deeply divided on which pet makes the best author photo ever, but I think we can agree they both belong in this list of icons?

Photo from 1989 edition of A Wild Sheep Chase, photographer unknown

As I start to include a second comedian on this list, I admit that it doesn’t feel quite right. Comedians want you to think their book is funny so in a more obvious way it serves them to have a hilarious author photo as well. It’s not as unexpected as, say, Rabih Alameddine or Xiran Jay Zhao going the humorous route. But listen, Ali Wong HAS HER EYES CLOSED AND IS FEIGNING SLEEP OR MAYBE SHE IS ACTUALLY ASLEEP in full glam on the cover of her book. If that doesn’t deserve a spot on this list, then I don’t want to be writing it. What could be more Ali Wong than having your eyes closed on the cover of your first book? The photo is iconic.

Jean Rhys is unimpressed by you. You’ll read her book anyway.

This list would not be complete without the late, great Joan Didion. This piercing image of her loosely holding a cigarette between her fingers is nothing short of iconic. Has a photo ever screamed “I don’t care” as much as this one does? Have we ever cared more? Not possible.

On sitting down to write this piece, I had to ponder the question “what makes an author photo iconic?” Demonstrating personality and stepping outside the box were the short answer I came up with, and this list makes clear what I consider to best convey those things: impressive facial expressions, humorous costumes, cute animals, and women who DGAF.