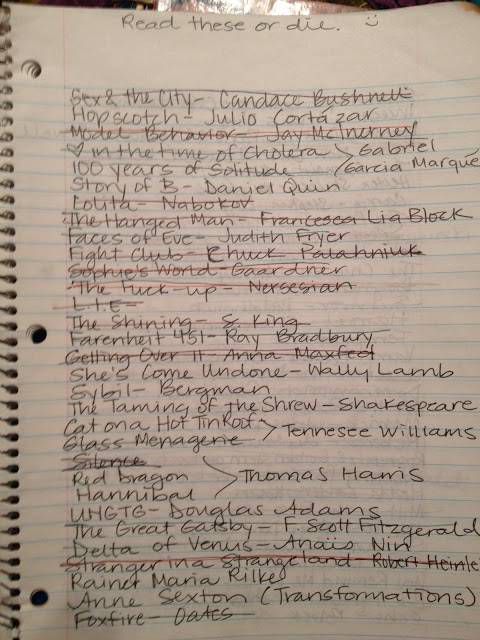 I once stole a t-shirt with an image of Sylvia Plath’s floating head on it from my high school theater’s costume department. It was grey, and also had a scripty-fonted quote about death or writing or something from one of her journals. The shirt was an XXXL and I remember thinking, “Perhaps this shirt belonged to a burly professional football player and the world is less shitty than I think it is.”

I could’ve worn the shirt as a dress, but I was too busy wearing black fishnets as arm warmers and hating strangers to think of stuff like that, so I cut Sylvia’s head out (along with the quote) and safety-pinned it to the front of my Very Early 2000s military-style cross-body tote thing.

I contrasted nicely with the Vera Bradley wristlets full of strawberry-flavored lip balm and–notably–no extracurricular books that were carried by my classmates. Surely this has no relation with how my Moby-Dick iPhone case and Virginia Woolf t-shirt and F. Scott Fitzgerald tattoos stand in sharp relief against the backdrop of the other moms at our playground.

Before the military-style cross-body tote (stolen from the mall after reading On The Road) was bedazzled with Sylvia’s perfect coif, it had to pass the War and Peace test. I wouldn’t go on to read War and Peace until I was in my early 20s, married and working a customer service job teen me would’ve flogged early-20s me with glass-studded whips for accepting. But in high school I knew, based on my bone-deep bookishness and need to one-up people who never knew I was one-upping them, that I would one day have to lug it around. It was my personal eventuality, the literary black hole that I circled round and round, getting closer and closer through Crime and Punishment and Anna Karenina and feelings of personal superiority.

So, all my purses had to be big enough to carry War and Peace in preparation for its inevitable arrival, making me a clumsy thief who had to stop and consider the depth and width of the bag she was about to steal. It helped that purses that big are also big enough to carry two to three not-War and Peace-sized books, along with the various detritus of the life of a teenage girl who likes to always be prepared to run away, even though she knows she never will.

It’s a rule I still keep, and even though TI-83 calculators and loose change and packs of Camel lights have been replaced with diapers and voter registration cards and a set of keys that open doors to old apartments, and though War and Peace has come to mean Any Big Ass Book I Want To Carry Around, I am sometimes able to see that I keep the rule now for the same reasons I did at 16.

My two best friends and I were called The Trinity by classmates who thought that counting to three and naming a thing that had to do with three was the height of cleverness, but we did each act as agents of each other when we were apart, and we attributed unwarranted holiness to our mission to make people like the same books we did. While teachers tried to get us to care about Algebra II/ Trig, we passed notebooks back and forth, making lists of books people had to read in order to hang out with us. The whole list wasn’t necessary- we’d accept a good faith effort.

It sounds very Mean Girls, and it was certainly rooted in a heartless Weeding Out The Unworthy place that I don’t inhabit anymore. But when I enter a new house now I immediately scan for bookshelves and then quickly eye the titles, looking for common ground I can inhabit with the host. And if there isn’t a bookshelf to be found, well, I might just pick up my Sylvia Plath-adorned tote, no doubt containing Elizabeth Wurtzel’s Bitch and a worn copy of The Perks of Being a Wallflower and walk on out of there…but only in my head.