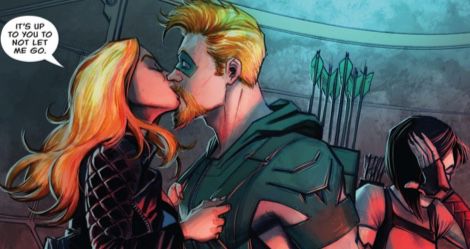 I’ve read a lot of fan fiction over the years. And by a lot I mean an average of 5-10 hours a week, every week, for the past 15 years. Don’t do the math, for both our sakes, just trust that when it comes to fic, I’m pretty well read. Many things draw people to fan fiction – plot holes, love for a setting/world, a desire to see two characters (who may or may not be romantically linked in the original media) get together. That last one, we call that shipping. As in relationship-ing, and it’s the bread and butter of fan fiction.

Different factors draw me toward a particular ship, including subtext, chemistry, and visual appeal, but I will also read a pairing that I have no interest in solely based on the portmanteau. I love a well crafted ship name. Equal parts description and pun, a good ship name is like a good roller derby name – designed to make you both smile and groan.

What follows are a few of my favorite ship names from comics, both the absurd and the brilliant. 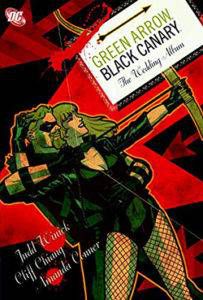 Here is our first absurd example. Far better than the simple smashing together of two names (I’m looking at you Olicity), Dinahver Quance is ridiculous in concept, yet rolls off the tongue effortlessly. Also, Black Canary and Green Arrow are a historical couple in comics. They first got together in 1963, and with DC Rebirth, they are together once again.

Yes, I snuck a Marvel cinematic pairing in, (just wait, there are more) but how can you not love Kat Denning’s Darcy Lewis? I would ship her with Mjolnir. (Note to self, possible name: Electric Hammer.) I digress. I adore that Darcy is usually represented in ship names by electricity or tasers. See: Electric Green, Scarlet Shock, and Taserhawk.

Yes, Stucky is the far more used moniker, but Starbucks is funny, and fits into all those coffee shop AUs perfectly. It doesn’t make quite as much sense as Stucky, but come on there is a huge star right on Steve’s chest, and one on Bucky’s Winter Soldier arm (hey, they match!), so it totally works. 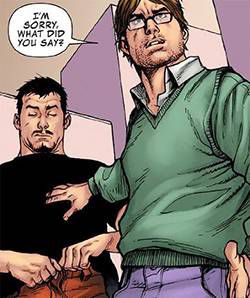 I honestly don’t know which name I like better. Science Bros is fun, and coined by (my Queen) Kelly Sue DeConnick in her run on Avengers Assemble. Brony makes me think of sensitive bearded millennial boys debating the wonders of Equestria. Friendship is magic. Brony totally works for those slice of life, Bruce brings Tony ice cream because he’s sad fics.

This might be my favorite ship name. Groan worthy, funny, meta – it has it all. Fandom took a throwaway line from Captain America: The Winter Solider and made it into shipping gold. Brilliant.

This is a prime example of how a ship name brought me to a pairing I would never have even thought of reading. I was big into the Skimmons (Sky/Jemma) ship on Agents of Shield, which no longer works now that Sky is Daisy Johnson or Quake (Dimmons? Jake?). Anyway, I saw Mockingnerd, giggled, and was immediate on board with this awesome science lady romance. 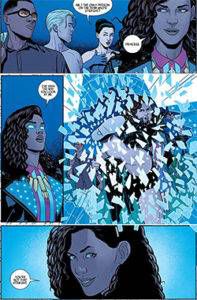 from Young Avengers #15 by Kieron Gillen and Jamie McKelvie

It’s supposed to sound like America if you say it fast. Think, “MeriKa.” Okay, okay, it’s not the most awesome name and personally, I would call it American Princess, but it’s a great ship.

Feel free to point me toward your favorite ship names in the comments. I’m always looking for more.