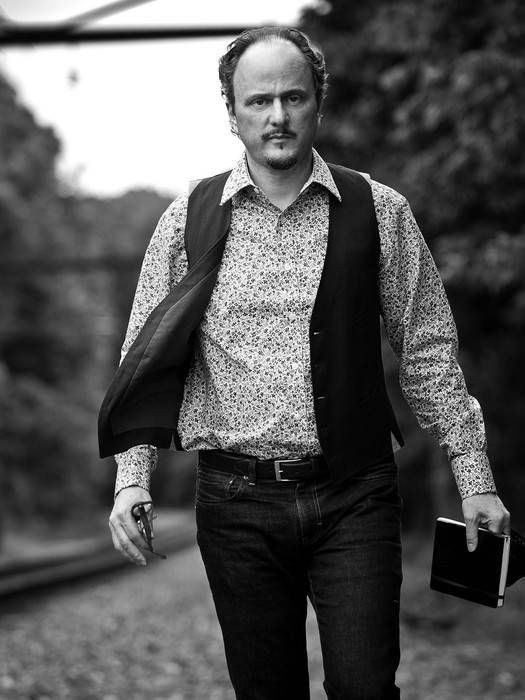 I am terrible with authors. I already knew this because of how awkward I get at events at the bookstore where I work, but it was confirmed at this year’s Book Expo America. I met several authors while either standing in their signing lines or at the American Booksellers Association reception, and I always managed to say the goofiest, most undignified thing possible.

I don’t hero-worship writers, but I do try to think of something to say other than, “gee-whiz, your book was great, by golly.” I imagine they get bored of having that conversation over and over, so I try to come up with something else. This is my hubris. This is my doom.

My first awkward author run-in happened in line for Justin Cronin’s new book, The Twelve. I took a photo of him as he signed the book of the person in line in front of me. He noticed it, and told me to tweet my photo or put it on Facebook. My response was something along the lines of, “Well, according to an episode of Are You Afraid Of The Dark, the camera takes a piece of your soul every time a picture is taken of you. I’m going to tweet your soul!” His response was a curious little head-tilt that screamed I AM UNFAMILIAR WITH NICK AT NITE AND YOU ARE SEVERAL BITS OF STRANGE, to which I thought YOU WROTE A VAMPIRE ZOMBIE BOOK HUSH YOUR JUDGEY FICTIONAL THOUGHTS.

Next, I met Jeffrey Eugenides at the ABA  reception. It took place just after an ABA luncheon, so it makes sense that he made small talk by asking me which boxed lunch I had selected (it was roast beef). I then couldn’t think of anything to say and was just standing there trying not to make a vest-on-a-billboard joke, so he very politely filled in the gap in conversation with roast-beef related banter, and signed my copy of The Marriage Plot to “Amanda, the carnivore.” While I’m sure he’s had more awkward interactions, I will now forever associate him with lunch meat.

At that same ABA reception, I went on to tell Amor Towles (author of Rules of Civility) that his book reminded me of “The Great Gatsby, but without such an annoying fucking narrator.” His response was a kind of dead stare, suggesting that perhaps he had a soft spot in his heart for good ole Nick, and that I’d just insulted his favorite literary character of all time. I meant to compliment his work by favorably comparing it to, oh I don’t know, one of the best books ever written. But noooo! My foolish pride!

Then I met Ann Patchett and, upon reading my badge, she did a fist-pump and exclaimed “Sister bookseller!” I thought she was trying to do a fist-BUMP, so that resulted in a little awkward fist dancing with an Orange Prize winner. And THEN I met Tea Obreht (author of The Tiger’s Wife, which was my Book I Sell To Book Clubs last year) and told her that I had convinced all the book clubs in Richmond to read her book. I subsequently panicked, thinking, “Convinced is a terrible word! She’s going to think I had to FORCE this book on people, which isn’t true,” so I stammered out an explanation while she graciously doodled a tiger in my book and sort of chuckled. At me? With me? I’ll never know.

Robert Goolrick is coming to my store this month to present his new book, Heading Out To Wonderful. My money is on my saying something like “Your book is so interesting and dark, but not dark like Stephen King dark, more dark like [panics, tries to think of a comparable dark book that is equally literary, fails, names an awful movie from the 1980s.]. So that’s going to be fun. Wish me luck.