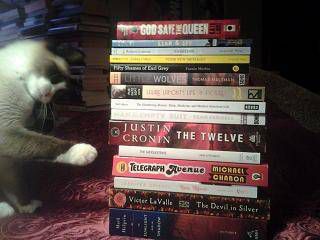 Last week, this little country mouse left cozy New Hampshire behind and attended Book Expo America in NYC – holy cats, it was awesome! I got to meet authors, book reps, and fellow Book Rioters and booksellers. The publishers had booths on the show floor, where they displayed upcoming titles, and THEY GAVE ME BOOKS. I was overwhelmed by all the amazing books I saw, and ended up carrying a 42-lb bag of ARCS home on the bus. (For those of you who don’t know what ARC stands for, it’s Advance Reading Copy, or as I call them, Advance Reading Crack, because it was nearly impossible to say no to them.) Here are some of the titles I picked up that I’m really excited about (as modeled by my cat, Steinbeck.)

The Middlesteins by Jami Attenberg (Oct. 2012, Grand Central Publishing) The story of the Middlestein family and their interactions with food and each other. I confess – I already read this book, but it was so wonderful, I wanted another copy to share.

Telegraph Avenue by Michael Chabon (Sept. 2012, Harper Collins) The literary icon returns with the tale of Brokeland Records, its owners and the competition that is moving into the neighborhood.

The Twelve by Justin Cronin (Oct. 2012, Ballentine Books) As the sequel to The Passage, it goes without saying that this is going to be one of the biggest books of the year. And it’s totally deserved – Justin Cronin is a fantastic writer, and his apocalypse story, complete with scary monsters, is hella-fun.

Man in the Empty Suit by Sean Ferrell (Feb. 2013, Soho) I love this premise: A time traveler who returns to the same place every year to celebrate his birthday arrives to find his older self dead from a gunshot wound. He has exactly one year to figure out who shot him and to keep himself from being murdered. Inorite?! Sounds awesome.

In Sunlight and in Shadow by Mark Helprin (Oct. 2012, Houghton Mifflin Harcourt) I love Helprin’s Winter’s Tale with the heat of a thousand suns, and I am crazy-excited for this one, a post-WWII romance between an heiress and a paratrooper. I don’t mind the kissing parts if they’re done well, and Helprin has proven before that he’s a wonderful writer. 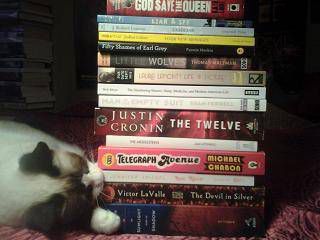 The Devil in Silver by Victor LaValle (Aug. 2012, Spiegel & Grau) The author of the wicked fantastic Big Machine returns with the story of Pepper, a newly-admitted patient of a mental institution in Queens. Pepper can’t recall his crime that brought about his incarceration, but he has bigger problems than that at the moment: The Devil is a resident of the institution, too.

Familiar by J. Robert Lennon (Oct. 2012 Graywolf Press) Another amazing-sounding story: A woman is driving back from visiting her son’s grave when she realizes everything is somehow different. For starters, when she arrives home, she finds that her son is no longer dead. This sounds super-creepy and awesome. And if you haven’t read Lennon’s previous novel, Castle, you should do so. Right now. Go. I’ll wait here.

God Save the Queen (The Immortal Empire 1) by Kate Locke (available now from Orbit) I tried to win an advance copy of this months ago, and was unsuccessful, so I was excited to see that Locke was doing a signing at BEA. This book looks like so much fun – it’s about the British Empire being run by an undead matriarch, and her vampire and werewolve minions. No, it isn’t nonfiction.

Little Wolves by Thomas Maltman (Jan. 2013, Soho) Interweaving stories revolving around Minnesota farms during drought season in the late 1980s.  I picked this up simply because it had a blurb from Peter Geye on the cover. Geye writes amazing books, so if he says it’s great, that’s all it takes to get me to read it.

Fifty Shames of Earl Grey by Fannie Merkin (a.k.a. Andrew Shaffer) (Aug. 2012, Da Capo) I have not read 50 Shades of Grey, nor do I plan to read it, but I’ll definitely read this spoof of it, because Andrew Shaffer is awesome. I’m sure it will be hilarious. I was excited to see people’s reactions to it at BEA – the line for the signing was soooo long! And the book came with a bookmark with a tea bag attached, which Steinbeck promptly removed with his little fangs. (See picture below.) 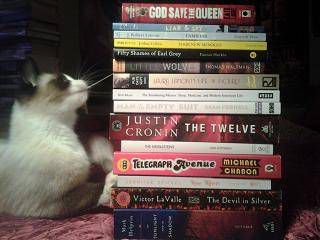 Love Slave by Jennifer Spiegel (Sept. 2012, Unbridled Books) I am a die-hard Unbridled Books fangirl – they consistently release fantastic books. At the show, the reps told me I’m going to love this novel about an office temp who writes a confessional column for an alternative weekly. It sounds great – and it has a cat on the cover. I probably would have picked it up based on that alone. Cats run the internet, you know.

Mr. Penumbra’s 24-Hour Bookstore by Robin Sloan (Oct. 2012, Farrar, Straus and Giroux) I wasn’t able to include this book in the pictures, because I wasn’t able to snag a copy – they went that fast! But I can’t resist anything about bookstores, and this one sounds weird and brilliant and fun, about a guy who works the night shift at a 24-hour bookstore. Also, Sloan spoke at BEA, and he was wildly impressive. Excited to get my hands on a copy.

Liar & Spy by Rebecca Stead (Aug. 2012, Wendy Lamb Books) I have already read this book, but it’s incredible, as is Stead’s Newbery Medal-winning previous book, When You Reach Me. Seriously, Stead is one of the greatest authors of books for intermediate readers out there today – she’s smart, classy and inventive. Two cat paws way up for this one.

Laura Lamont’s Life in Pictures by Emma Straub (Sept. 2012, Riverhead Books) I am not entirely certain that Emma Straub is made of real. She must have clones to be able to have a huge internet presence, work in a bookstore, review television shows, bake amazing treats (which she sometimes brings to her readings), and do everything else she does. And, oh yeah, she also writes amazing books. Laura Lamont is a wonderful novel, about a Hollywood starlet’s rise and fall. (I am checking the fine print on the copyright page to see if it actually says “Written by Emma #3.”)

The Slumbering Masses: Sleep, Medicine, and Modern American Life by Matthew J. Wolf-Meyer (Oct. 2012, University of Minnesota Press) I was surprised by how little non-fiction I grabbed at BEA, as I’m trying to increase the number of non-fiction books I read. The Slumbering Masses is a discussion of sleep pathology and the sleep industry. As one who sleeps maybe three hours a night, this one looks incredibly interesting.

I’m going to tell you more tales from BEA itself soon, but for now: What books are you excited to read, kittens?