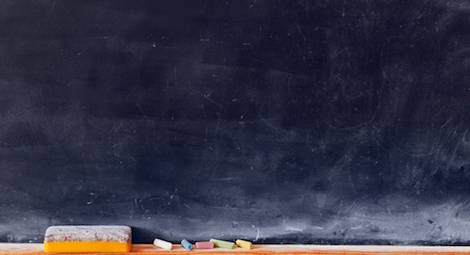 It happens even now, ten years into retirement.

My dad’s former students, sometimes from decades ago, will recognize my father everywhere, whether it’s in the local Wawa getting hoagies, on a beach in Maine, or over the phone in a telemarketing call. My English teacher father, now retired, taught the full range of students at our local high school for 40 years, everything from A.P. classes to college prep to electives on vocabulary building (his “Word Power” students have a special handshake). My dad, himself the child of two English teachers, had a gift inherited by my brother and sister, both teachers, for reaching students who so many had given up on. He treated them like they are absolutely capable of analyzing Milton’s imagery, dissecting a Yeats poem, and drawing parallels between Romeo and Juliet and their own lives, and so they were. If ever there was a real-life teacher like Robin Williams in Dead Poet’s Society, it was my dad.

Growing up, my parents, both readers—my mom a voracious speed reader who devours books about history and sociology—took us out to Borders every Friday night so they could listen to live, local bands and my brother and I could run around the store. My brother and I would race around the children’s section until we’d go off to our respective corners and huddle down with a book, finally tired out. Little Women, Roald Dahl, Shel Silverstein…ever the daddy’s girl, I’d often convince my dad to not only buy my one book, but two, or even three, if I was good. We’d head home when Borders closed at 11, my dad carrying me out to the car where I’d fall asleep, my latest book clutched in my tiny hand as I’d rest my forehead against the cool glass. Saturday mornings, ever the family of a teacher, we’d wake up bright and early, and my dad would cook pancakes. For me, Saturdays and Sundays were spent almost exclusively reading, 48 blessed hours where I could read however much I wanted.

And fortunately, my father didn’t care.

As the years passed, my love for literature didn’t let up. I didn’t “grow out of it,” as some might have predicted (and hoped). When I went on vacation with friends, I didn’t care about gossiping about boys (unless they were Mr. Darcy) or playing MASH (unless it stood for Mass Paperback, Audiobook, Short Story, or Hardcover). I’d read YA. Or I’d read Salinger. Taking my dad’s mustard-colored hardback school copy of Catcher in the Rye off the shelf in his office, I devoured the novel at my friend’s lake house. We went boating on the water, my friend shouting at me to look while she skied one-handed. Well, I missed it. I was too busy reading about Holden Caulfield and puzzling over my dad’s question to me about the cult classic: “But is any of it real?”

Throughout my teenage years, I walked the halls of my high school under the cloud of my father’s legacy. He’d retired just before my freshman year, and the hallways would part for his little awkward daughter who upperclassmen would say looks just like their beloved Dr. Davis. Teachers would treat me special and never fail to remind me what my father meant to them as a mentor. I was just trying to identify myself in relation to this godlike presence. I was cocky in English class, slaying the classic white male authors and tossing around literary jargon I’d gleaned from my father’s theory books in his office. I thought I knew everything. I didn’t. But it made me somewhat flattered and nervous when I’d see my dad watching me through the window of my English class after he’d been observing a student teacher down the hall. He remained connected to the school for years by supervising and mentoring college students doing their teacher practicum.

I graduated high school and started at Columbia University eager to join the New York literati. I wanted to distance myself from the Western Canon taught by my father. But even back in the shelves of my dorm room, I still had my father’s Major British Writers tucked in between my Communist Manifesto and The Brothers Karamazov (I was a budding Bolshevik). And when I got done with my first class of Advanced Ancient Greek, I ran teary-eyed to the English department offices like I was fleeing a burning building, desperately asking them if there were any English electives that weren’t closed. I chose 17th-century Prose and Poetry. I might have moved a few hundred miles away from suburban Philadelphia, but I was still reading the same authors we debated at the breakfast table. And when I needed a sounding board for my essay on John Donne’s “The Ecstasy,” I called my father. We went through the poem line by line, and I wrote my way to an A on the paper after I formulated my own thoughts from our discussions. Very impressive, my professor wrote. My collegiate career as an English major had begun.

Eventually I transferred to the University of Pennsylvania, the same institution where my father had earned his doctorate in education. In fact, he met my mom at a bar half a block away from my dorm. By that point, my dad and I were discussing literature almost every weekend. I still loved to come home. I still had trouble making friends. I was still awkward and painfully shy. Except when I was in one of my English classes.

Five years after graduation, I live with my parents. We just moved to a new house where I have an amazing office. It looks out onto a garden and further on a forest. My books can breathe in ample storage space.

And I can keep an eye on my dad. He’s getting older. Sometimes he falters in reciting a King Lear monologue or misremembers a word in William Blake’s “The Tyger.” He doesn’t read many novels anymore because his eyes bother him, and what he does read is large print.

But my dad has never doubted me. He knew I’d find a way to do it, to build my life around literature. I never had the teacher gene, the “rotten gene,” as he jokingly called it after my brother started teaching English professionally.

I might not have that gene. But I have plenty of his.

For years my father always told me that he would always be with me if I looked in the mirror, that I’d see him there in my reflection. I spent a lot of my adolescence thinking I wanted to distinguish myself from him because I was swallowed up in his shadow, but over 28 years I’ve become a version of him I am proud of. I look up from my desk now, the one he put together for me, and I see the wind rustle through the trees through the window. There are books stacked on the ledge, romance novels and contemporary thrillers. In that glass I see myself, ambitious, nerdy, confident, bookish, with his hair and eyes. I may not have my father’s teaching career, and we may not be referencing the same canon anymore, but I have his analytical skills, his love for literary debate, and his passion for words. I am him and I am not. I am the English teacher’s daughter. But I am myself, which is exactly what he wants for me.