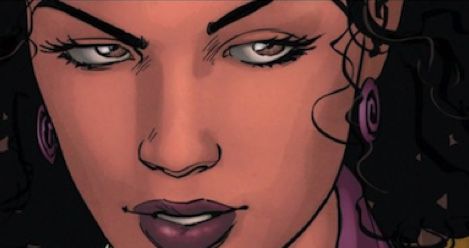 A few weeks back, while writing about the revealed character lineup for the upcoming Birds of Prey movie, I encountered an unpleasant surprise. I’d been excited that Huntress—presumably the Helena Bertinelli version—had been announced as part of the lineup. That was partially because she’s a great character, but also because in the 2014 Grayson series, she was portrayed as a woman of color:

Her ethnicity is never specified, but judging by the art she’s presumably black or mixed race. This doesn’t preclude her being of Sicilian descent as well, as she has been since the ’80s—Italians of color exist and are woefully underrepresented in media—and it was a small but significant step towards greater diversity in the DCU. After all, it’s not like the Batbooks were lacking in black-haired, blue-eyed, pale heroes (see also: all the male Robins even though two of them are canonically not white).

So I was pretty perturbed when I went looking for a more recent image in the current Batgirl and the Birds of Prey and found a Helena who looks like this: 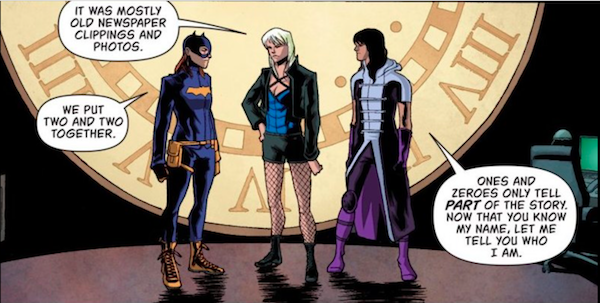 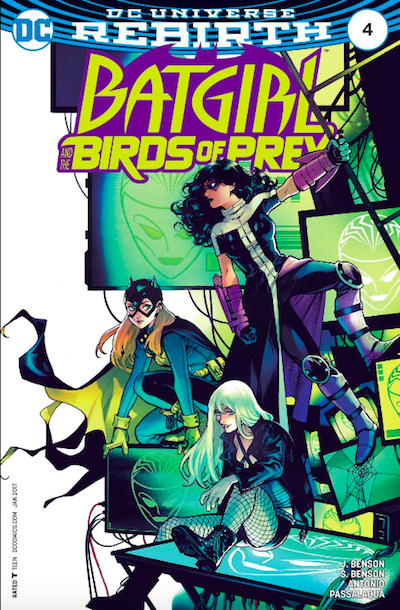 And flashbacks where baby Helena and her parents look like this: 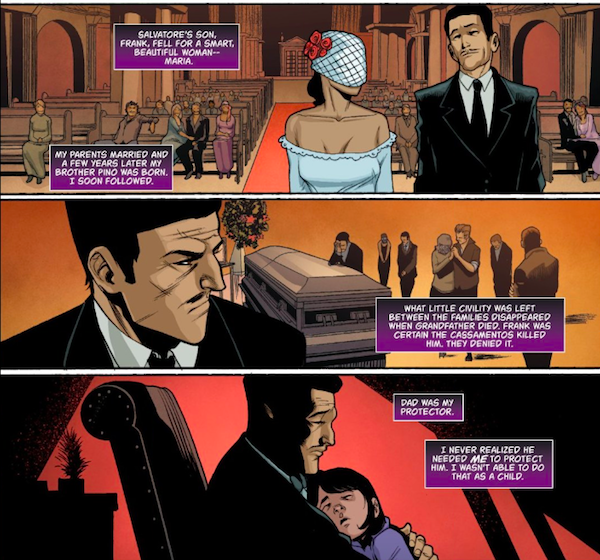 Helena’s coloring is inconsistent throughout the series. Some of that is due to lighting and mood, of course—she’s a Bat, she spends most of her time skulking under a gargoyle at night with a hood over her face. But her hair is now in loose waves instead of ringlets (relaxed? or is this meant to be her new (old) natural texture?), and when she stands in group shots with her white teammates, there’s often no difference in skin color. Her parents bear no markers of non-white (Italian) ethnicity except that her mother consistently has the same skin tone as Helena. So when Helena’s dark, her mother’s dark. When Helena’s light, her mother’s light.

We’ve seen this before, most notably with the second Green Arrow, Connor Hawke. Connor’s ethnic heritage is spelled out explicitly: his mother, Sandra “Moonday” Hawke, has a black father and a Korean mother, while his father, Oliver Queen, is white.

When Connor first appeared in 1994, he looked like this: 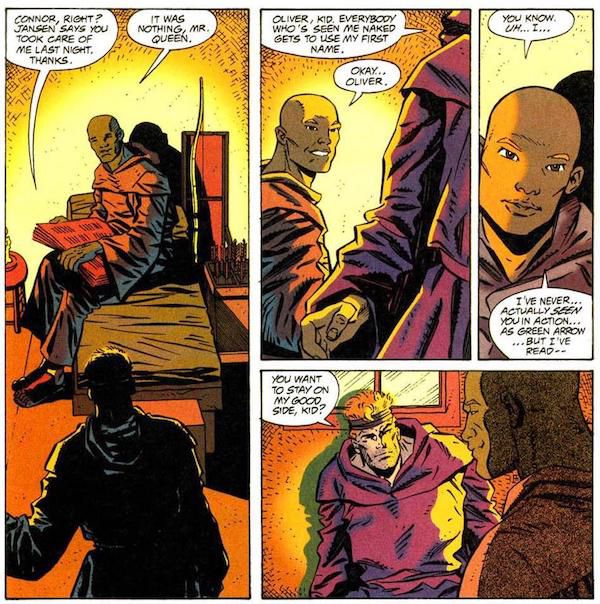 Connor debuted during an era in which classic Golden and Silver Age characters were being killed off and retired in droves and replaced with younger models, often POC or retconned to be. (See: Kyle Rayner, introduced as Irish but given mixed Irish-Mexican heritage after a few years.) For a time, DC’s A and B lists were more diverse than they ever had been before. During Ollie’s death and Connor’s time bearing the Green Arrow mantle solo, he looked like this: 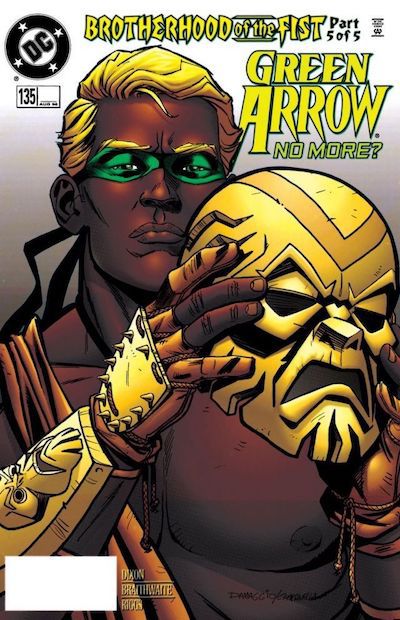 …I’ll admit I don’t remember the context for the rest of the imagery on this cover, I read this comic in like 2004.

But come the turn of the century, backlash from Boomer and Gen X fans (and creators who’d been fans as kids) led to the return of the classic (white) heroes, and the sidelining of their successors. For Connor, it led to something else, too. When he appeared in Quiver, the story that brought his father back to life, he looked like this: 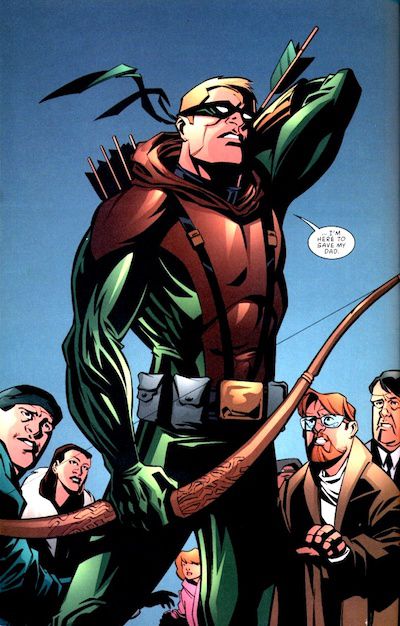 And by the time he was practically written out of the series, he looked like this: 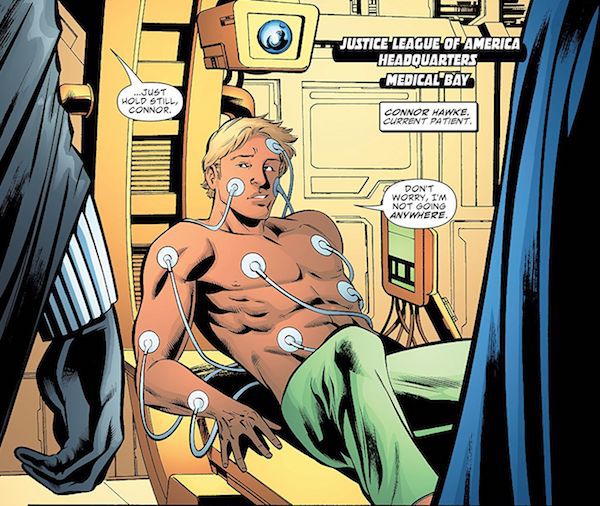 It’s like once Ollie was back on the page, colorists stopped understanding how a white man could have a non-white son. (Connor then had his personality wiped and his archery abilities taken from him before disappearing in the New 52 reboot, but don’t worry! He was shown to exist on Earth-2, where he is…a white redhead who dies and is replaced by that universe’s Oliver Queen. Wow.)

Ollie is too young in current continuity to have an adult son, but Connor’s still around! Sort of. Here he is in the Injustice universe, where he’s Connor Lance-Queen, the son of Oliver Queen and (white) Dinah Lance: 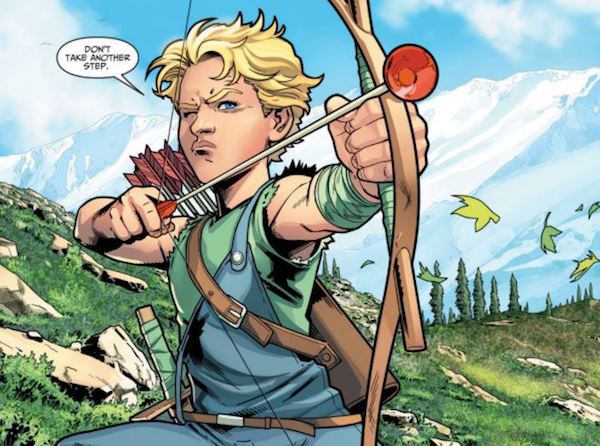 Though these are two examples of progressive lightening, one-off slip-ups with obscure characters happen too. Back in 2011, Barry Allen’s granddaughter Jenni “XS” Ognats, whose father is black, appeared in a group scene with white skin, blonde hair, and a completely wrong costume before fan outcry let to a correction. It’s happened to Empress, Onyx, and Machiste—all black when first introduced; all much, much lighter when they returned after long absences.

I doubt that most of these changes were malicious. Coloring errors do happen, especially with that last group of characters, all of whom are relatively obscure and who had been AWOL for a while before they turned up as a different race. Coloring is one of the last steps in producing a comic and it’s done under a huge time crunch, and there’s no “coloring bible” from the publisher telling colorists exactly what hues to apply to each character’s hair and skin and unitard. But excusing the colorist means holding the editor to a higher standard when it comes to maintaining accuracy regarding the characters it’s literally their job to preserve the consistency of—not to mention the writer, who gets a final pass at the colored pages and should know the races of the characters they chose to include in a scene.

Helena and Connor, now…that’s a stickier wicket, isn’t it? Both characters went from “unquestionably POC” to “ethnically ambiguous, maybe just a white person with more Southern than Northern European heritage and a really great tan.” You get the feeling, especially with Helena, that DC’s trying to appease their conservative and progressive fans at the same time. She’s not white…but she’s not demonstrably not white anymore, either. She’s whatever you want her to be! She’s Schrodinger’s WOC!

Comics are already overwhelmingly, blindingly white. A quick glance at September’s solicits shows about 5–6 times as many white characters starring in books as characters of color. Introducing a character like Connor Hawke or race-bending a character like Helena Bertinelli is a step towards greater representation and inclusivity in the DCU. Whitewashing them is a retreat to an exclusionary all-white fantasy land that the comic book industry (and media in general) should have been well past decades ago. And rolling Helena back to white in particular makes it seem like her initial change to being a WOC was never anything more than what Joseph Illidge calls “the visual deception of diversity”, i.e. a cash-grabbing stunt with no intention of actually expanding the spectrum of personhood depicted on the pages of DC’s comics.

And if you think I’m quibbling too hard over a slight shift in tone and hair texture, please read Ronald Wimberly’s superb short comic “Lighten Up,” where he speaks to the importance over these “slight” differences more eloquently and profoundly than I ever could.

I hope Helena is both drawn and written as a woman of color going forward. (Hey DC! You know what might help with that? Having her be drawn and written by women of color!) I hope she’s played by a woman of color in the movie, and I hope her inevitable appearance on backpacks and T-shirts and Funko Pops reflects that. I hope little girls of color get another highly visible addition to the all-too-small pool of pop culture heroes that look like them (although no, they probably shouldn’t emulate all the “shooting mafia dons with crossbows” and whatnot).

I hope DC proves my pessimistic expectations wrong. Because Helena’s a great character, and she deserves better than to be quietly whitewashed back to the ’70s. And so do her readers.