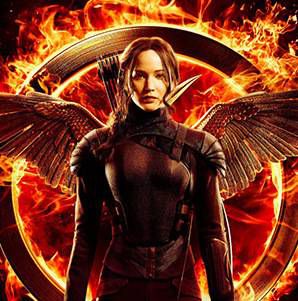 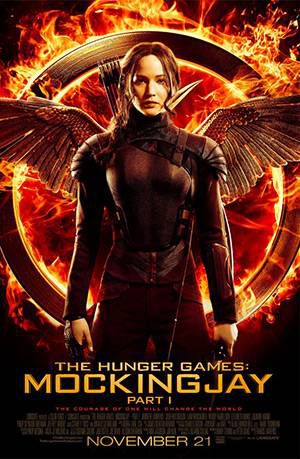 Let me confess something, I was not a fan of the book Mockingjay. I thought it was a letdown after the otherwise strong first two books. However, I found Catching Fire to be such an incredible movie…how could I not be excited about The Hunger Games: Mockingjay, Part 1?

I’m not even that irritated that they decided to split it into two movies.

Part 1 opens not long after we left Katniss in Catching Fire.

She’s in District 13 with her family, Gale, and allies, but desperately frustrated that they left Peeta behind.

We see her first broken and sweating in a dark place, repeating her story to herself. She was a tribute. She fought in the Hunger Games. Peeta is still in The Capitol. A voice tells her she needs to sleep. She can’t. Nightmares.

Jennifer Lawrence still inhabits an awesomely complicated Katniss. One of the best parts of these books is that she hasn’t figured herself out. We benefit from the first person narration, and get inside the head of someone who is unsure and confused, and is only ever confident in one thing: her loved ones have to survive. Katniss in the movies is clearly conflicted (and I’m not talking about between Peeta and Gale). It’s bigger than that. She’ll agree to be the face of the revolution, but only if the rebels agree to rescue the remaining victors from the Capitol: Peeta, Johanna, and Finnick’s Annie. She does what she’s good at: reacting emotionally and vocally for what she sees as right. Madame President Coin, Plutarch, Haymitch, and Effie get pretty meta when they discuss what part of Katniss makes people feel. This is what the story does so well. Katniss is not just the Mockingjay. She’s not a Mary Sue going to save the world. She’s not even all that likeable. But she is passionate, and she is headstrong, and she will make the sacrifices she needs to make. She is complicated. It’s awesome.

Another thing I loved so much about Catching Fire, and something I felt caused it to be a better movie than its predecessor, was that it embraced the depth and darkness of the story. Mockingjay: Part 1 is no different. The movie is tense with tiny moments of levity (most of which come by sacrificing Buttercup the Cat’s dignity).

One major source of anxiety? The missing Peeta Mellark. We get peeks of Peeta at The Capitol where he is interviewed by Caesar Flickerman (Stanley Tucci is as ever brilliant) and each subsequent glimpse we get, he’s a little thinner, a little more haggard, a little more beaten down. But he still says the Right Thing to the districts: Stop the senseless violence, be better, lay down your arms.

I’m not sure how they made Josh Hutcherson appear so small and painfully skinny, whether it’s CGI or with makeup. Or maybe just putting him bigger suits. (Movie magic!) But the fact remains: it is harder to look at him every time he is on screen. But Hutcherson kills it in his penultimate scene. Without giving too much away, Peeta has changed more than we know, and he absolutely brings it with a terrifying intensity.

Julianne Moore became a surprisingly genuine and compelling Coin. Jeffrey Wright is Jeffrey Wright, which is to say a joy to watch as Beetee. And Philip Seymour Hoffman is great in the role of Plutarch, every inch the salesman of the revolution. I was gladdened to see that the movie was dedicated to his memory.

The Lesser Hemsworth (just kidding, just kidding) Liam Hemsworth is fine as Gale. One of my major sources of annoyance with Mockingjay the book is that Gale’s character is kind of ripped up and thrown into the gutter. They pull back on that in the movie (which I truly appreciated), but you can see the beginnings of his fanaticism for District 13’s militaristic and violent life.

Elizabeth Banks is so lovely to watch on screen as a stripped bare Effie. She doesn’t have her clothes or her wigs. She’s another character who makes the leap from page to screen so well. She’s gone from this frivolous, silly woman to the one with all the heart.

I know it sounds like I’m gushing, and I am. Mostly over the performances, and what the movie got so, so right in a book that went kind of wrong (for me). But it’s not perfect. It does feel drawn out at times, and you can see they had to fill time to split the story into two movies. The handcam in the battles sometimes felt nauseatingly shaky. And I think we had maybe 5 too many close-ups of a shaken Katniss. (We get it, things are not going well.)

But even with all of that, this was a good movie. There’s so much I didn’t talk about (because as it is this review has gotten way long): Finnick! Finnick and Annie! My heart! Johanna! Donald Sutherland’s insidious President Snow! Natalie Dormer! NATALIE DORMER! Whom I would want to smirk at me until I die.

That’s enough from me, tell us, what did you guys think of The Hunger Games: Mockingjay, Part 1?

P.S. One last thing: The Avox Pollux  was totally played by Elden Henson who was Fulton Reed in The Mighty Ducks. I noticed that. I thought you might want to, too.