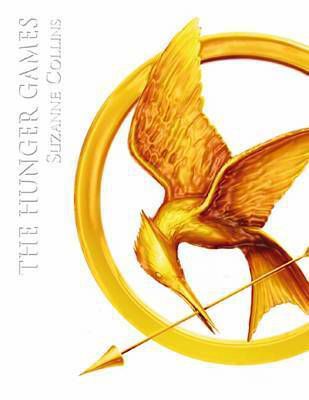 September 14 marks the fifth anniversary of the publication of Suzanne Collins’ world-wide phenomenon The Hunger Games. Since it came out in 2008, there have not only been two additional volumes in the saga, but also a successful film adaptation, as well as adaptations of the rest of the books in the series in the works. The Hunger Games has been wildly successful, and it’s a book that certainly will find itself within the YA fictional canon for many years to come.

To celebrate the anniversary, I thought it would be neat to look at how the book’s cover has been portrayed throughout the world. 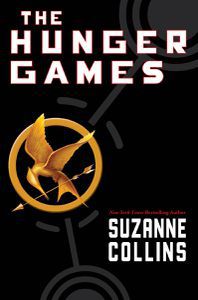 This is the cover most of us are familiar with, as it’s the one available in US and Canada. The image in the center is, of course, the hugely symbolic mockingjay. It’s a fairly simple cover, but it more than does the job. It has staying power because it’s iconic. 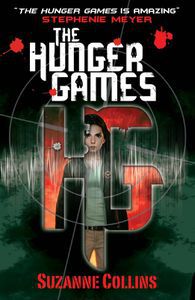 In the UK, The Hunger Games published as a paperback, and readers had their choice of cover images. They could choose from the cover featuring Katniss in the center. 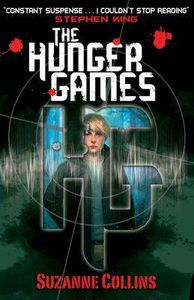 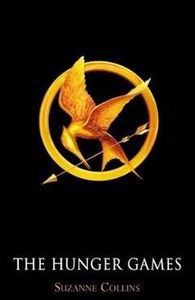 In December 2011, Scholastic UK produced another cover for the series. This time, it was aimed at adults. It mirrors the US cover quite a bit, with the focus not being on the characters in the story, but on the mockingjay. 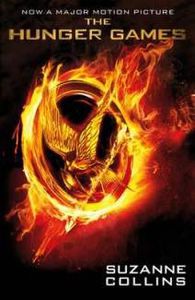 Naturally, there’s a film tie-in edition of The Hunger Games, as well. This is the UK take on it — and it’s striking. It doesn’t look like a lot of film tie-ins which feature the people from the movie on the cover. This one remains iconic. 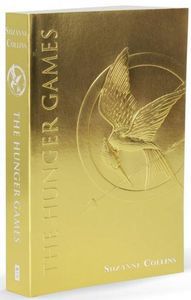 This shiny gold cover is the limited edition of The Hunger Games, which will be available to UK readers when Catching Fire hits theaters. Gorgeous, isn’t it? 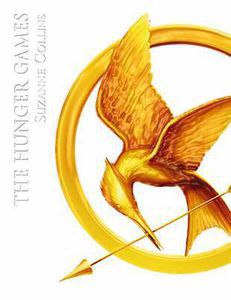 Readers in Australia and New Zealand have access to the US and the UK editions of The Hunger Games, but in January 2012, they had a luxury edition of the series published just for them. You can’t tell from the image above, but the mockingjay and the title of the book are raised a bit, and the pages are themselves metallic on the edges. 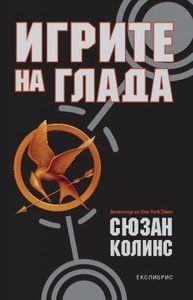 In Bulgaria, the cover is pretty familiar. Nothing is lost in translation, even for readers unfamiliar with Bulgarian. 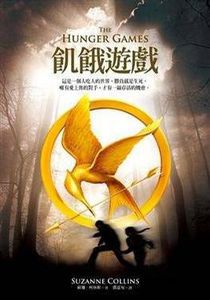 One of my favorite foreign editions is this one from China. Not only is there the mockingjay, but there’s definitely a sense of foreboding with the hazy sky, the towering trees in the woods, and the shadowy figures running (they are, of course, Katniss and Peeta). 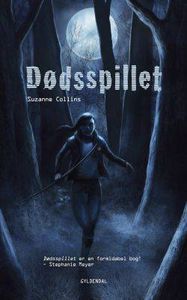 Not too far off from the feeling in the Chinese cover is this cover from Denmark. It looks so different from the US edition but it captures the story perfectly. Katniss is at the center, but there’s definitely much more — something much bigger — going on in the story. 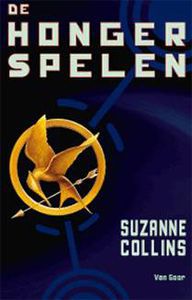 The Dutch edition of The Hunger Games isn’t too dissimilar from the US edition, and like the Bulgarian, it’s easy to recognize the book for what it is. Even with a foreign title, it’s easy to spot. But it’s an interesting choice to go blue for the background, rather than black. The Dutch editions of Catching Fire and Mockingjay are red and light blue respectively, like the US editions. 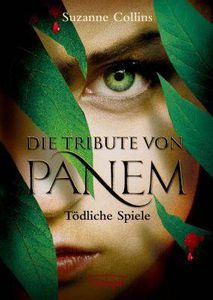 Now for something very different from Germany. Katniss’s fierce face, surrounded by leaves (some bloody). I don’t speak German, but I believe instead of being called The Hunger Games, it’s titled a little bit differently, too: The Tribute from Panem. 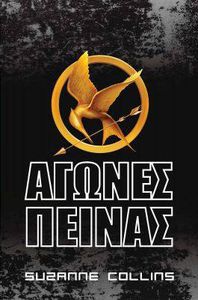 A little bit of a twist on the familiar look, complete with the mockingjay, is the cover from Greece. 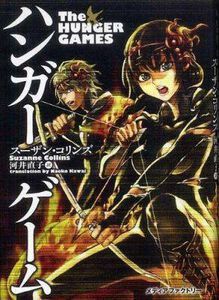 Japan takes the cover and runs with it in a more manga-style direction. In many ways, it doesn’t feel as ominous as other covers do, not as iconic. But it’s stylized and appealing to teens for sure — Katniss and Peeta both look ready to take on the Games. The mockingjay is there, too, even though it’s not front-and-center: it’s positioned near the English title on top. 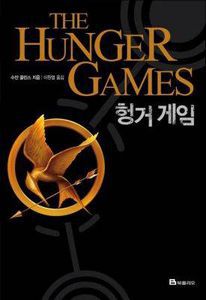 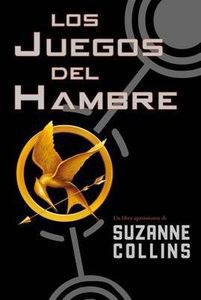 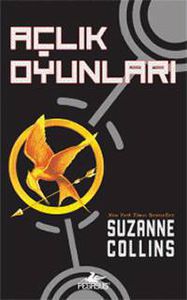 Three more foreign covers which take their look from the US edition include, from the top, Korean, Spanish, and Turkish. Without the different title translations, it’d be hard to tell them apart, though interestingly, the Korean title is done in gold, rather than in white. 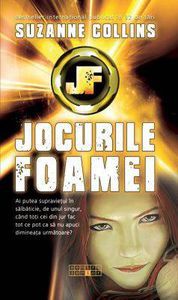 In Romania, we get a girl staring at us as readers. It’s hard to tell what the book might be about, and there’s not the iconic mockingjay present on the front cover. But it’s interesting that the “JF” — title initials — almost serve as a symbol themselves. 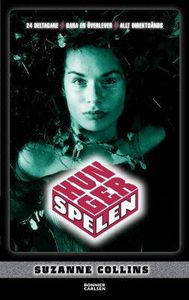 Another foreign edition without the mockingjay but which makes the title almost a symbol itself, is the cover from Sweden. 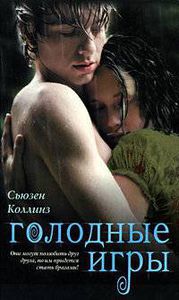 Taking things in an entirely different place is the Russian cover. Where is our fierce Katniss? Where is our mockingjay? It’s an interesting take, for sure, as the cover angles the story as a romance, far more than it does a dystopia. I also don’t think the shirt Katniss is wearing is one that would do a whole lot for her in the arena.

There are a million fan takes on the cover, as well, but I wanted to highlight three of the best ones I’ve seen: 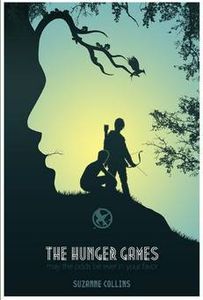 At DeviantART, user Sanjota created this beautiful, eye-catching cover. On first glance, it looks simplistic, but it’s far from. The mockingjay is there in more than one way, and the face shape for the sky offers a really unique way into Katniss without her becoming simply a face. I believe that the figures are Katniss and Gale, when they’re out prior to the reaping. 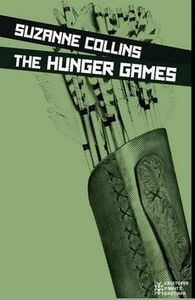 Another creation from DeviantART is from user mister-mantis. It’s simple, but it also perfectly captures the feel of the first book in one image. 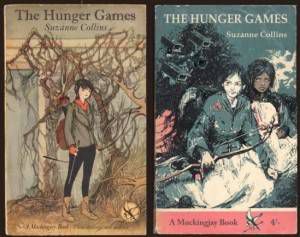 Hands down, my favorite fan art covers are these by deviantART user Kate Kyrillion. They’re inspired by the covers of 1960s books for younger readers, with washed out covers and very straightforward font treatments. Both renditions feature the mockingjay and Katniss, and both offer up some diversity in the presentation, too. If you check out her DeviantART site, you can see even more Hunger Games inspired art.

Do you have a favorite foreign edition? Know of any others to add?