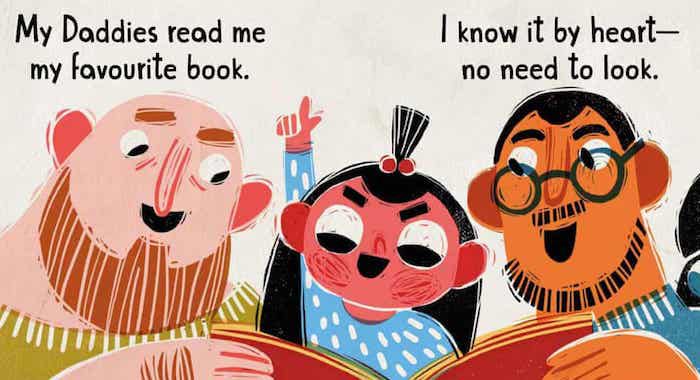 Rights for queer people have been under attack in Hungary, and this week, with the implementation of a new law which bans LGBTQ people from being included on educational material or in TV shows for those under 18, a Hungarian bookseller has been slammed with a fine for not disclosing the queer content of a recently-published children’s book.

Micsoda család!, by author Lawrence Schimel and illustrator Elīna Brasliņa, is a book in translation combining two of the team’s English-published titles, Early One Morning and Bedtime, Not Playtime. The first book depicts a boy’s morning with two moms, while the second, a girl with two dads.

Pest county’s fine for the bookshop emerged when county commissioners discovered the store failed to indicate “content which deviates the norm,” according to The Globe.

Earlier this year, Hungarian officials forced Labrisz, an association of lesbian, trans, and bisexual women, to print a warning in their fairytale anthology called Wonderland is for Everybody, indicating to readers stories within the collection included “behaviour inconsistent with traditional gender roles.”

Micsoda család! author Schimel responded to the government’s actions on Twitter, calling it a normalization of hate and prejudice.

“I woke to sad news from #Hungary: a fine of 250,000 Florints to a bookshop for selling my children’s book MICSODA CSALÁD! illustrated by Elīna Brasliņa, translated by Anna T. Szabó, without warning that it portrays families different from the “normal”,” he wrote yesterday, June 7. “This time the attack against this book (which contains two fun stories about kids who just happen to be part of #rainbowfamilies, without that being the focus of the story) used a different law than the new “propaganda” law that goes into effect tomorrow.”

He continued, “But the only propaganda being done here is by the Hungarian government, which is trying to normalize hate & prejudice with these concerted attacks against books like mine & MESEORSZÁG MINDENKIÉ, which represent for kids the plural & diverse world they live in.”

The book’s Hungarian distributor issued a statement about the fine and explained that the government’s comments and actions about a book depicting a perfectly happy and healthy family was unnecessary and discriminatory.

“Rainbow families are completely normal, ordinary families. We love our kids the same way, we have to cook cocoa in the morning, we are annoyed the same way when she scratches the wallpaper with crayons, and the same way we get stuck when she first stands out at the school celebration. According to KSH’s latest microcensus, nearly a thousand rainbow families raise children – but their number is certainly higher than that because data were five years ago and does not include single gay parents, and those who could not for some reason not undertake to form a couple. In addition, many people from the current twenty and thirty age group have been undertaking or planning to have children since then. These families haven’t had their own story book so far. That’s why we thought it was important to publish a fairy tale book about them – and first of all for them,” reads part of the statement from Szivárványcsaládokért Alapítvány (Foundation for Rainbow Families).

Further, Foundation for Rainbow Families nots that they aren’t alone in Hungary when it comes to seeing diverse queer families represented in print and visual media.

“The Rainbow Family Foundation started a dialogue last fall because we believe that it’s best for all children to grow up in a family and also that families are diverse. We were pleased to see that a significant majority of the country has and supports us: the latest survey of Ipsos shows that 62 % of Hungarians believe that parents of the same sex are just as good parents as the different sex. But we also see that there are people who disagree with us that the child comes first,” the organization added.

Right wing forces in Hungary have doubled down on anti-LGBTQ legislation over the last few years. In addition to the above-noted laws, the government voted to outlaw recognizing trans individuals, as well as amended their constitution to define a family as “the father is a man and the mother is a woman.”

Líra Könyv will add the warning label to Schimel’s book, but the bookstore is looking into pursuing legal actions following the fine and implementation of law.

“Considering that the topic of homosexuality is shown by a serious number of world literature and informative books, and it is not clear what the legislator understands about self-purpose sexuality, and there is no book that cannot be proved ‘different from traditional content,’ fearful that Referring to the new law, similar ‘public interest announcements’ will be multiplied.,” the shop wrote in a Facebook post, “Bookstores are not prepared for preliminary content censorship, due to the release of about 10 thousand new Hungarian books a year. If the current individual decision of authority turns into a general practice, you can rely on the basis of the entire Hungarian book trade.”

By interpretation, the new law would remove classic works of literature from classrooms across Hungary, including books by Sappho, Ovid, Thomas Mann, and more.

Schimel’s goal in writing the book is to “celebrate queer families, to put more queer joy into the world, so that the only books available to children weren’t about conflicts,” he told the Guardian. Despite the new legislation and requirements to include a warning label about his book, he’s taken to promoting his work even harder, ensuring children who need these books — whether or not they’re part of an LGBTQ family — reach them.

“With all the attention about the fine for the Hungarian bookseller for selling my rainbow families book, I want to mention this forthcoming Spanish book I translated for @BookIslandBooks (with support from @ACEcultura) THIS IS A DICTATORSHIP,” he wrote on Twitter.

Comments from the publishers and bookstore are translated.