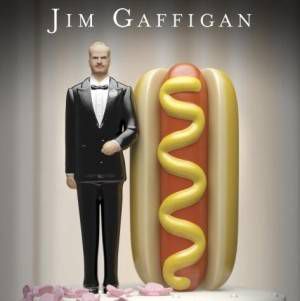 Jim Gaffigan is funny as hell, but his book is so, so terrible.

The Gaff’s stand-up is hilarious, and also clean, based as it is largely around food and holidays and having lots of children, and you can watch clips with your parents without feeling intensely uncomfortable Louis C K I am looking at you and your ‘Suck A Bag of Dicks’ bit in particular.

So it was with great delight that I accepted Gaffigan’s Food: A Love Story, but also great trepidation. I’ve read Tina Fey’s Bossypants, and LOL’d all over the floor, but I’ve also read the first fifty pages of Ron Burgandy’s autobiography and good lord, is it unbearable.

So I recognize that particular brands of comedy don’t translate well to paper. But I was VERY AND ERRONEOUSLY ENTHUSIASTIC about this, not solely because I, too, love food, and am an eternal optimist. Alack and alas. Because of my grievous disappointment, I wanted to get to the bottom of just why Food: A Love Story failed so spectacularly.

Part of it is that there is a lot of book, and not a lot of jokes, and any existing joke is worn to a sliver. I mean, just because I’m not nine doesn’t make referring to oysters as ‘snot from a rock’ not a joke, so point for team There Are Actually Jokes In Here. However, the second through fifth times he flashes the ‘snot rock’ card ON A SINGLE PAGE is just…

Or, ok. Referring to shellfish as ‘seabugs’ is actually pretty funny, and I totally empathize with this sentiment. Both are scuttley and gross. But you can’t just keep being like, Shellfish are like bugs! I’m not going to eat that, that is a bug. You wouldn’t eat bugs, would you? Well, shellfish are JUST LIKE BUGS HAHAHAHA.

And books are long where stand-up is short. Even the longest stand-up routine isn’t going to be more than, what, an hour? Maybe this running of any funny-ish joke into the ground, and any un-funny joke into whatever is below the ground (dwarves, probably) stems from a need to stretch an hour’s worth of material over more than three hundred pages.

So maybe a book (his second, no less) demanded more of Gaffigan than he had to give. But there’s also the issue of delivery. Like, there’s one chapter on a guy drinking a cup of gravy. Which, that is insane. You are correct, Jim Gaffigan, to go home to your wife and be like, Saw this guy drinking a cup of KFC gravy today. In. Sane. But he writes a whole chapter that is basically him going, I MEAN, RIGHT? A CUP OF GRAVY. It ends with this exchange:

WIFE: Well, why don’t you have a cup of gravy?

GRAVY DRINKER: Well, I guess I could…

That is some stilted-ass dialogue right there. HOWEVER, I can perform it to myself as though I were The Gaffigan and see how, maybe, I might laugh. HOWEVER REDUX, I should not have to be performing your act in my own brain, that’s not what this is. I’ve heard that the audiobook for Bossypants (read by The Fey herself) is hellalarious, but the print version is ALSO EXTREMELY GOOD in its own right. You don’t need to put on your nerd glasses and built your own platter of night cheese to make it work.

So part of it has to be because Gaffigan relies largely on delivery for his lulz. But what surprised me the most is that, for all of JGaff’s clean, family-friendly humor, he’s kind of offensive. And not deliberately, provocatively offensive like a Louis C K or a Dave Chapelle, but accidentally offensive the way people are when they just lazily say shit they think is funny without really thinking about the repercussions.

FOR EXAMPLE. The whole second chapter of the book is all (paraphrasedly), I don’t trust skinny people to make food recommendations because they’re skinny, so they must always be on diets or not like food that much, and I don’t trust super-fat people because they’re so fat they just eat anything indiscriminately. SKINNY PEOPLE AND ALSO VERY FAT PEOPLE AND THEIR COLLECTIVE EATING HABITS, AMIRITE?

And I GET that humor doesn’t always fly by the same rules as regular conversation, and that provocative statements can help expose where our prejudices lie, but you aren’t being subversive and clever when you’re just perpetuating tired and harmful old stereotypes. Plus, I am a skinny person who used to write for a food website and also I can bake better brownies than any. of. you.

And I would probably not have batted an eye at any of this had it been stand-up, mostly because it would glide past my analytic brain parts and out into the ether. I wouldn’t be sitting there, staring with my eyeballs at a sentence like ‘Overweight people have chosen food over appearance.’ THIS IS A ‘JOKE’ HE IS MAKING but also this is a thing that lots of people literally think is literally true. Go hang out in the comment section of ANY body-positive website and tell me I’m wrong (No don’t. You guys. There be dragons).

I’m always hyper-leery when a book is pitched to me as ‘hilarious’ or ‘wickedly funny’ or, worst of all, ‘snarky.’ But I somehow thought that because I enjoy JimG’s spoken goods, I’d feel likewise about his written word.

Some types of humor translate better to paper than others. The Three Stooges would make an awful book. Jim Gaffigan’s schtick could, I think, make the leap to the page, but I suspect it would have to be written by someone other than Jim Gaffigan. Alas for that.

THREE cautionary whales: I only read to page 50, which was plenty long enough for me to throw in the towel. If a book isn’t working for me stylistically, it’s not going to be able to win me over by tossing in a few mad relatives and a total house conflagration in the eleventh hour. Also, I received the book from the publisher. Also, I recognize that humor is a variegated kettle of fish, and what baits one person’s hook might miss another person altogether through no fault of the hook or kettle this metaphor has gotten confusing. Anyway. Caveat lector.

What makes written humor work for you? And which comedian’s books have you read recently who should have stuck to their day jobs (evening jobs? Nightclub jobs? When do people even DO stand-up anymore)?