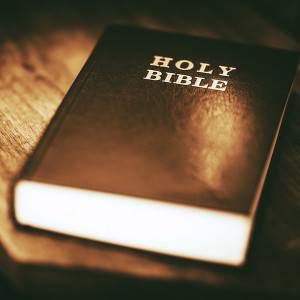 Bible-nerd frustrations: readers miss so much by presuming that the Bible can claim divine–or even singular–authorship.

A text written by God can’t be questioned. A text inspired by God and delivered via a prophet rests too near inerrant to invite conversations, too. But a text from our predecessors thousands of years back, who were attempting to understand creation and their place in the world? That you can approach as a fascinating inheritance.

And the fascination only builds when you allow for the academic, historical, interpretive perspective; when you allow that a scriptural canon isn’t one text, but many combined, each with distinct human authors, who had their own complex motivations for writing, and who—put into conversation with one another—can teach us so much about how we once understood our origins.

I have three religion and theology degrees, so it’s probably not shocking that I’m fascinated by biblical texts. What may put people off most about my Bible-related gushing is this: I think I love it so much in great part because I understand how human it is.

As such, one of my persistent frustrations is that people tend to approach biblical conversations presuming that the texts should primarily discussed as fundamentalists see them: as inerrant, as above critique. Treating that as implicit makes it really easy to pick the texts apart—particularly because some books, in both the Christian and Jewish canons, very clearly don’t agree.

Nor, scholarship tells us, should they. Nor were they even meant to.

1) The Hebrew Bible (NOT the “Old Testament”, please!) is a consistent text;

2) The inconsistencies between the four preserved gospels make the New Testament inherently less coherent than the narratives in the Hebrew Bible.

In the service of dispatching both of these notions, I’d like to encourage those who want to talk Bible, even snarkily, to read two books: Richard Elliott Friedman’s Who Wrote the Bible? and some well-annotated version of Tatian’s The Diatessaron.

The first is a masterful introduction to text-critical biblical study. The hows and whos of biblical authorship aren’t exactly taken for granted in academia, but Friedman’s text is an engaging introduction to the reality that, when it comes to the Torah, we’re not looking at a book penned by one guy. We’re not even looking at one book.

Friedman pulls apart the various strains of the Tanakh, JPED-style, highlighting duplicate stories, dueling stories, politically pointed stories, and an overarching and ingenious editorial hand. We think that disparate accounts of creation and flooding and the giving-of-the-law belong to a singular book because they were fused together brilliantly–not seamlessly, but with enough fluidity to enable readers to see unity, if they wish to see it, with some degree of credibility.

With the intricacies of the Torah understood, you can approach the Diatessaron for the sake of comparison.

Tatian wove together his biblical harmony not long after John was completed–just a few decades, really. Already then, this creative theologian realized that disparate gospels could prompt accusations of an inconsistent message. By way of a solution, Tatian made, from four gospel stories, one singular gospel story.

Betraying my hand: I’m a Torah-girl. If I’m handing out awards for artfulness, Friedman’s redactor beats Tatian, hands-down. The redactor had a commitment to preserving disparate strains of the same stories (romantically, I hope out of allegiance to the whole of Jewish mythology); Tatian (it is surmised) had more pointed aims. He threw bits out where they made unity difficult. The Diatesseron does not include every bit of all four gospels; it does present one final, comprehensive, singular gospel story, though.

Here’s what (I think) people might gain from reading both:

1) a reminder that holy texts are authored by human beings;

2) a sense that said human beings had very particular agendas;

3) the understanding that authorial agendas don’t nullify the significance of a text.

There’s something to gain, at least sense-of-religious-history wise, from considering the gospels as they are preserved–as four accounts with different emphases, maintained, intentionally, side by side. And there’s also something to gain, sense-of-religious-history wise, from considering the texts that precede the gospels on their own merit, some of which are preserved after having been fused together, also for a particular reason.

These are texts that writers, and editors, and those who did the work of creating canons, wanted us to read a very particular way.

That doesn’t make them nonsense; it makes them fascinating. It makes them (sorry, Dr. Friedman) really thrilling works of religious literature.