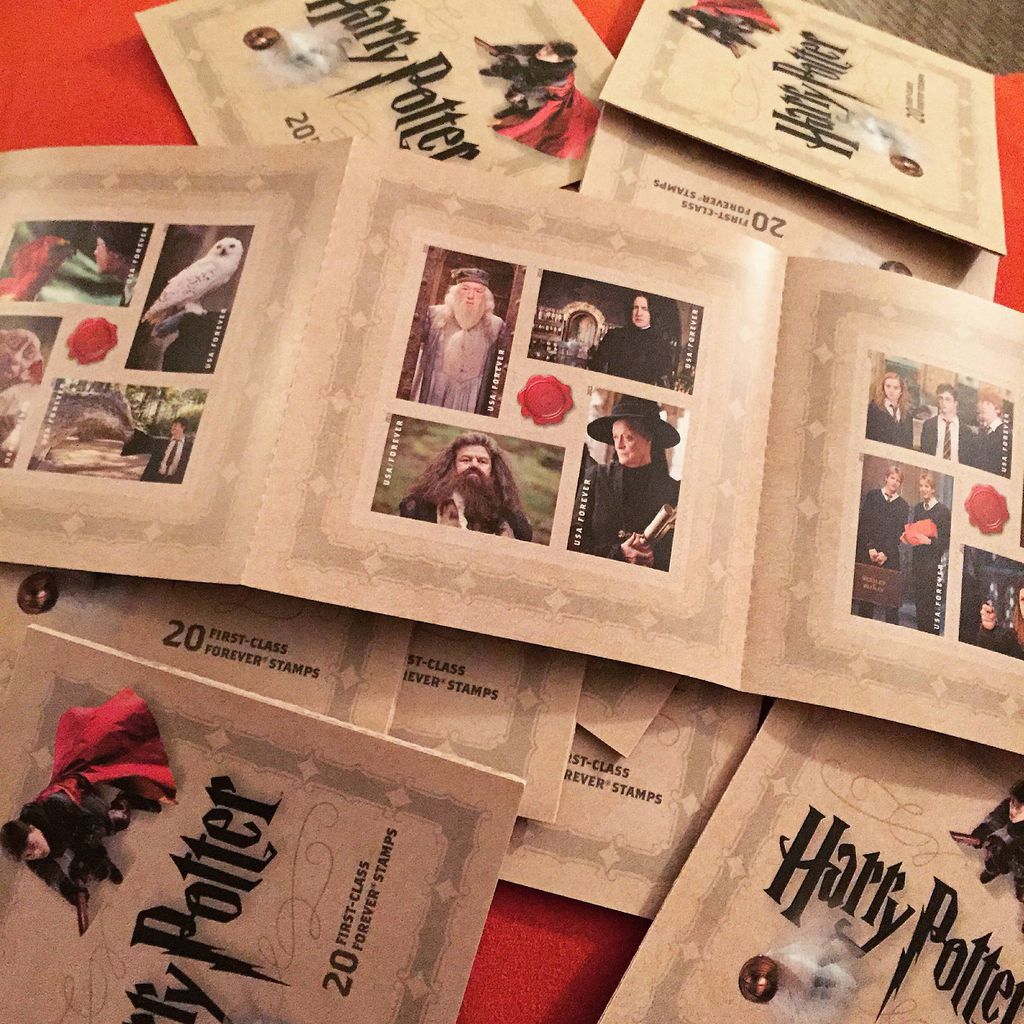 When my (now) husband and I decided to use Harry Potter stamps for our wedding invitations, it seemed like a great idea. I had loved the series for years and introduced him to it; listening to the audio-books together had been a meaningful part of our relationship. Plus, it would be fun. Right?

It wasn’t until I had the save-the-date envelopes in front of me that I realized this decision was fraught with peril. The stamps were all different, and they were FAR from equal. I obviously couldn’t just apply them willy-nilly. I had to make sure I gave each invitee a stamp that fit their natures, or at least a stamp that wouldn’t be a terrible mismatch.

In other words: using Harry Potter stamps took a whooooooole lot of time.

Let’s take a closer look at the stamps and you’ll see what I mean. Please feel free to use this analysis as a guide, if you decide to follow in my Potterish postage footsteps.

Page one: The Charming Children. 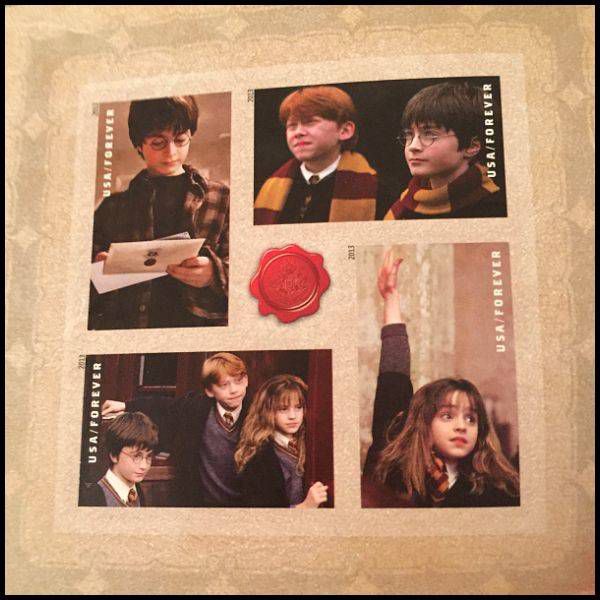 Harry Opens his Hogwarts Letter: it’s a stamp with a picture of a boy reading a letter! Perfect for anyone. A great start.

Pensive Harry and Confused Ron: Ron was Harry’s very first friend! Use this for your forever bestie.

Pensive Harry, Impish Ron, and Skeptical Hermione: Perfect for childhood friends/cousins or anyone who knew you when you were this size. Slightly sentimental, not remotely controversial.

Hand-Raising Hermione: This stamp is for your strong, intelligent, bookish lady friends. If you don’t know any of those, reexamine your life.

Page two: The Wonder of the Animal Kingdom. 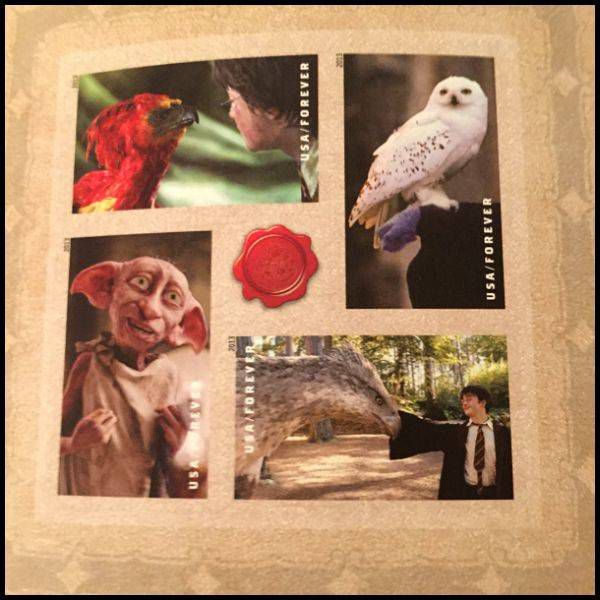 Worse-for-the-wear-Harry gazing at Fawkes: I think this is supposed to be from after Fawkes pulled Harry out of the Chamber of Secrets. The very young Boy Who Lived looks like he’s been knocked around a bit. Perfect for friends or family who are fond of deus ex machina.

Regal Hedwig on Unspecified Arm: With a Hedwig stamp on the envelope, you’ll literally have an owl delivering your letter. Only use this stamp for people who will appreciate that.

Harry with Buckbeak: A harmless boy-pets-animal scene. Use for anyone.

Dobby Gazing Worshipfully at You: Dobby is a well-loved character. He’s also somewhat alarming if you don’t know who or what he is supposed to be. This one needs to go to a Potter fan. A loyal, selfless one. 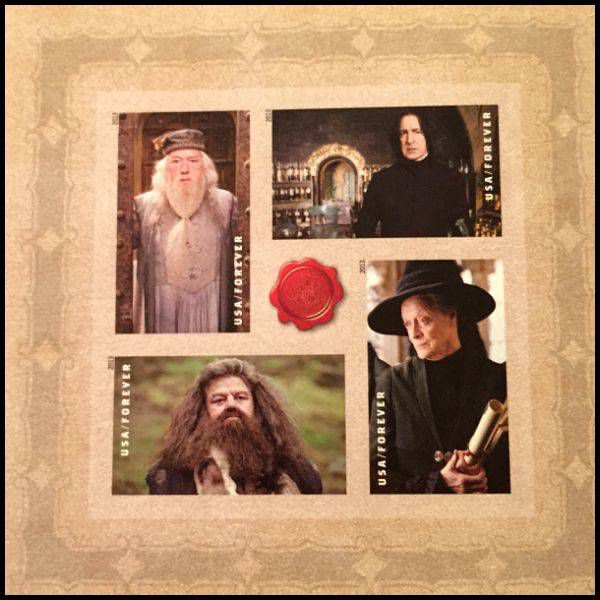 Intense Gaze Dumbledore: Use this for your dad, if he looks like he should be a wizard. Mine does.

Snape in Deep Thought: This stamp should only be used for confirmed Snape fans or people who have no chance of identifying the character. Too much potential for confusion/offense from losers – I mean, people who surely have some redeeming qualities – who never finished the series.

Wistful Hagrid: Use this for someone who is jolly, avuncular, tall, or hirsute.

Professor McGonagall Looking Stern with a Heart of Gold: I love McGonagall. Use this stamp for strong women you admire. Again: if you don’t know any of those, reexamine your life. 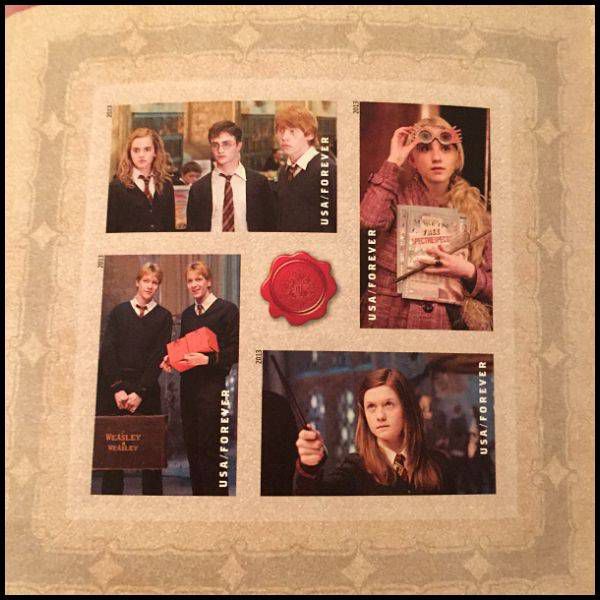 The Trio has Entered Puberty: I like this stamp for college friends. People who met you once you were at least partway grown up.

Luna Lovegood Being Amazing: For someone who appreciates delightful quirkiness.

The Weasley Twins Looking Gently Mischievous: This stamp should be used for a troublemaker, a twin, or someone who won’t be excessively heartbroken to see Fred and George standing next to each other.

Ginny with Aggressive Wand Stance: Give this one to someone who thinks that Ginny is a good character. (In other words, don’t send it to me.) 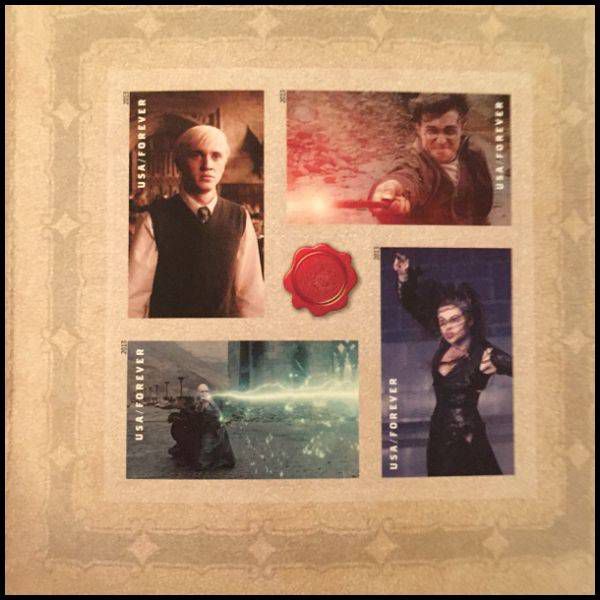 Draco Malfoy Looking Like He Regrets His Life Choices: This is the most usable stamp on this page. Give it to an actual Draco fan, someone who appreciates blonde bad boys, or someone who won’t recognize the character.

Harry Potter Disarming You Angrily: I didn’t put this stamp on a single wedding invitation. After all, I don’t want people’s invitations flying out of their hands, do I? Expelliarmus!

Voldemort is Killing You Right Now: Also known as: “You’re invited to my wedding but I wish an evil dude would kill you.” What kind of correspondence is this intended for? I have 20 of these leftover and I’ve been using them to pay bills.

Bellatrix Lestrange Pauses with Hair in Her Face: Bellatrix is a really, really terrible lady. BUT the stamp isn’t too awful looking. If you have someone on your list who definitely won’t be familiar with the characters (or show their envelope to anyone who is) and you’re running low on stamps, this one is a possibility.