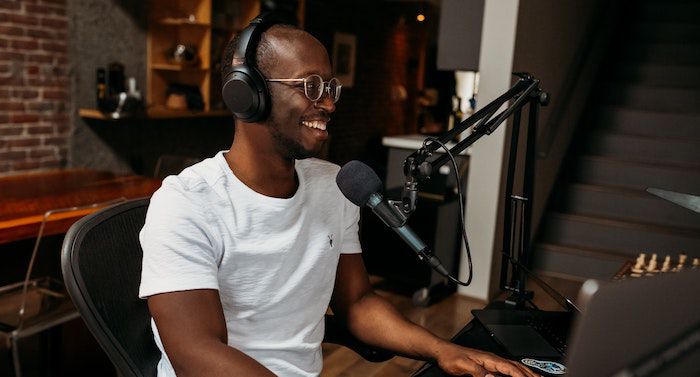 I’ve been obsessed with podcasts for a long time now. I’ve listened to them since the early 2010s, when most of them were basically just repurposed radio shows, and these days I subscribe to literally hundreds. They’ve kept me company constantly over the last 18 months.

Since I’m also obsessed with books, it follows that a huge proportion of my podcast subscriptions are book-related. When I discovered the Book Riot Podcast in 2013, it became one of my favourites, opening the path to my ultimately writing for Book Riot from 2015. And I realised, a couple of years later, that I really wanted a British Book Riot — something that would tell me what’s new, cool, and worth talking about in the world of British books and reading. I’m from the UK and live in the U.S., and I’d realised that I knew nothing of what was going on in the literary scene back home.

No such podcast seemed to exist, so I began to daydream about starting my own. And then, like most of my daydreams, that too turned into an obsession. It started with a blog — the Brit Lit Blog — while I thought about it some more and tried to convince myself that I would be learning all the relevant technology, even though it kind of scared me a little. I even went to a workshop run by Hrishi Hirway — the wonderful cohost of The West Wing Weekly. It was fun and interesting, and I came away both with the sense that I could do this and that there was a lot to learn.

I cast around on Facebook for some relevant groups and people I could learn from — places I could ask my questions. I found She Podcasts, and from there it slowly began to dawn on me that I wouldn’t have to learn the technology for edits. Instead, I could pay someone to do the complicated stuff for me while I either learned it or worked toward making enough money that paying someone made sense.

That made all the difference in the world. Instead of being stuck by where to begin, I was free to get in touch with writers I knew from Twitter. I’d been building relationships there for a few years already, and had used it to shout-out books I loved and thank their authors for writing them. That meant I naturally had a place to start from when it came to potential guests. I started the Brit Lit Podcast in 2017, and it’s still going strong now.

If you’re thinking of starting your own bookish podcast, here’s what some of my advice would be.

Be a Good Literary Citizen

Long before you start, make some friends in the bookish community. Go to events (virtual for now); support your local bookstore; shout out authors and books you love on social media; hang out on Bookstagram and engage with comments and discussions. Listen to a variety of bookish podcasts, not only to get an idea of what you do and don’t want to emulate, but also to join the conversation. That way, when you start, you’ll be adding your voice to that conversation, rather than yelling into the void.

Find an Online Community of Podcasters

I mentioned that Facebook groups have been invaluable to me. They’re a great place to do a search for the questions we all have when we start about equipment and websites and hosts, and, as you go on, a place to help keep you improving and motivated. If Facebook isn’t your thing, there are other ways to find people — Clubhouse has a lot of podcast related discussion, for example.

There are a lot of bookish podcasts out there. Many, like the wonderful Currently Reading Podcast, consist of a couple of friends talking about all things books; what they’re reading and loving and general dispatches from the bookish world. Some have more of a book club vibe, discussing individual reads. Many others, like Writer’s Bone or The Stacks, are interview-based.

But because there are a lot of those kinds of podcasts already, it’s not easy to get established with a more general formula, unless you have a pre-existing fan base like tens of thousands of Instagram followers. That’s why it’s good to have a niche of some kind — a Unique Selling Point — that will intrigue potential listeners enough for them to want to check it out.

Novel Pairings takes classic literature as its starting point, recommending books from the frontlist or recent backlist that match themes or moods of them. Reading Glasses has a regular feature where the cohosts Brea and Mallory recommend technology for the bookish life. Backlisted‘s mission is “breathing life into old books”, and they do that by taking one forgotten or underrated gem from the past per episode and doing a deep dive.

What unique thing can you bring to the table?

Find a Co-Host or Interviewees

A lot of listeners prefer podcasts that consist of two or more voices. It’s also a lot to sustain a whole podcast, episode after episode, all by yourself. If you have a friend who’s a natural fit for a co-host, great; be prepared, though, for that to change the nature of your friendship, at least a little. If you’re doing it by yourself, think about who you’d want to interview, and have a few of those interviews scheduled or, ideally, recorded, before you launch.

Get the Basic Equipment

I started with a Blue Yeti mike, pop filter, and earphones. While it would be lovely to have a studio to record in, for now I lay a towel out on the table and surround myself with cushions for sound absorption, and the results are decent.

Find, or Become, a Good Editor

If you’re technology minded and have endless wells of patience, and a lot of time to devote to the enterprise, it’s possible that you’ll be able to do it all yourself.

But as I mentioned, the thought of all the technology was overwhelming to me. My editor was able to get me set up on Libsyn, which is my podcast host: it’s where I upload my episodes and from there, they’re distributed to all the various podcatchers. They were also able to advise me on where to find theme music. And every week, I send them my files, with notes on how I want the episode edited, and they tweak the interview accordingly and put the whole thing together.

My first podcast editor wasn’t a good fit for me. Our communication styles and expectations were wildly mismatched, and I was often frustrated. But I have a wonderful one now and it makes my life easier and smoother. It’s worth shopping around and getting some recommendations, and maybe asking if you can be put in touch with some of their clients so that you can get a sense of whether you’ll work well together.

Be Prepared For Hard Work

However hard you think you’ll need to work to get a podcast off the ground, promote it, and keep it going, double it. Then double it again. Don’t bite off more than you can chew — it’s better to start with a consistent and quality monthly episode than overwhelm yourself with two episodes a week that will quickly swallow up all your time.

Do It Because You Love It

Hopefully, a day will come when you will make money from your podcast. For me, that day came two years in. For some, it comes sooner. But be prepared for a long slog first, and, if you can, to invest some of your own money or maybe crowdfund for the basics.

As with so many creative endeavors, if you’re going to do this longterm, you need to love it for its own sake, not just for the audience it will gain you or its potential financial benefits.